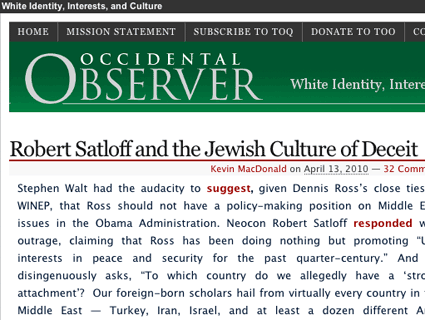 An example of the sort of thing the Charles Martel Society funds.Screenshot from <a href="http://www.theoccidentalobserver.net/2010/04/kevin-macdonald-robert-satloff-and-the-jewish-culture-of-deceit/">The Occidental Observer</a>

Robinson and Taylor are each board members of Young America’s Foundation (YAF), which cofounded the annual Conservative Political Action Conference and runs the conservative youth group Young Americans for Freedom. (YAF owns and manages the Ronald Reagan Ranch, trains conservative journalists, and calls itself “the principal outreach organization of the Conservative Movement.”) And Robinson, YAF’s president, is on the board of two other conservative groups: Citizens United, which brought the landmark Supreme Court case of the same name, and the American Conservative Union, which operates CPAC.

With these positions, Robinson and Taylor are at the center of mainstream conservative infrastructure. But each also sits on the three-person board of America’s PAC, a far-right outfit that in 2004 gave $5,000 to the Charles Martel Society, a white nationalist group, according to the PAC’s filing with the Federal Election Commission. Taylor, YAF’s former executive director and a current board member, founded America’s PAC in 1983. Both his and Robinson’s names appear on America’s PAC letterhead before and after the donation to the Martel Society. Since 2004, America’s PAC has raised and spent over $5 million, giving donations to dozens of Republican candidates.

The Martel Society is named for Charles Martel, who stymied a Muslim invasion of Europe by winning the Battle of Tours in 732*. It was founded in 2001 by William Regnery II, an heir to a conservative publishing fortune and a “prime mover and shaker in white nationalism publishing,” according to the Southern Poverty Law Center, which tracks racist extremism. The Martel Society is best known for publishing The Occidental Quarterly, which is sort of the Nature of academic racism, and its sister online publication, The Occidental Observer. The Anti-Defamation League has characterized the Quarterly as “racist” and the Observer as “anti-Semitic.” The Observer maintains an archive of stories on the topic of “Jews and the financial collapse,” and the Quarterly once awarded a $10,000 prize for books on the “group evolutionary strategies” of Jewish people. According to records America’s PAC filed with the FEC, its donation to the Martel Society was a “grant.” The Charles Martel Society did not respond to a request for comment.

“It is preposterous to suggest there is any racial component to America’s PAC’s grants,” Robinson says in an email. “We have supported Allan Keyes, Ken Blackwell, Allen West and others.” In another email, he says, “I don’t recall specific grants from nine years ago, you would have to talk to James Taylor about that.” Taylor did not respond to requests for comment.

Taylor once led another white nationalist outfit. He was vice president of the National Policy Institute, also started by Regnery. The group was “basically was founded to be kind of a white supremacist think tank,” says Marilyn Mayo, the codirector of Anti-Defamation League’s Center on Extremism. Started in Augusta, Georgia, in 2005 and now based in Montana, NPI has published reports on “Affirmative Action and the Costs of Diversity” and “The State of White America 2007.” It warns on its website that “the dispossession of White Americans will have catastrophic effects for the entire world, not just for our people.”

Taylor’s connection to the Martel Society was first reported by the Chambersburg Public Opinion, a local Pennsylvania newspaper, last August. When asked about America PAC’s donation to the society, Taylor, who was running for state Senate at the time, told the paper he now “thought the Charles Martel Society was too militant.” But he acknowledged his connection to NPI, and defended its mission. “You’ve got the NAACP and B’nai B’rith,” he said. “Why not something for white people?” Taylor went on to emphasize that he “hasn’t been involved in years” with NPI or Martel, and “wouldn’t be involved now considering what they have on the website now.”

According to NPI’s tax returns, Taylor was vice president of the group as late as 2007, when it released “The State of White America 2007.” That report called Brown vs. Board of Education, the Supreme Court decision that desegregated public schools, “arguably the worst decision in the Court’s 216-year history.” The paper contended that “integration and the civil rights movement led directly to the destruction of great cities; and to millions of whites suffering terrible injustices, including assault, robbery, rape and murder, and losing everything they had through the ensuing destruction of their neighborhoods and their property values.” The NPI was founded, according to its original mission statement, “to elevate the consciousness of whites, ensure our biological and cultural continuity, and protect our civil rights.”

In an email, Richard Spencer, who currently runs NPI, maintains that “NPI is not a ‘white supremacist’ organization” and has a record “of collaboration with Jews who support our mission.” He continues: “We do not desire that the White race lord over other peoples; indeed, we find such a notion repellent…All kinds of races, ethnicities, and religious groups—from lesbians to left-handers—have been eager (and in many cases, encouraged) to organize and advocate politically on behalf of themselves. NPI believes that Whites have the same right…NPI takes its stand on behalf of America’s historic majority, as well as European peoples worldwide.” Spencer says, “[W]e are nationalists, in the proper sense of the word: we seek to promote the heath of our race.”

Asked about the Martel Society donation and Taylor’s years of association with NPI, Robinson says, “I’ve known and worked with James Taylor for several decades and he has never treated anyone as part of a racial group and always treated everyone fairly as an individual.”

*Correction: The date of the Battle of Tours is disputed, but most sources put it in 732 or 733, not 734, as this article originally stated. The sentence has been corrected.