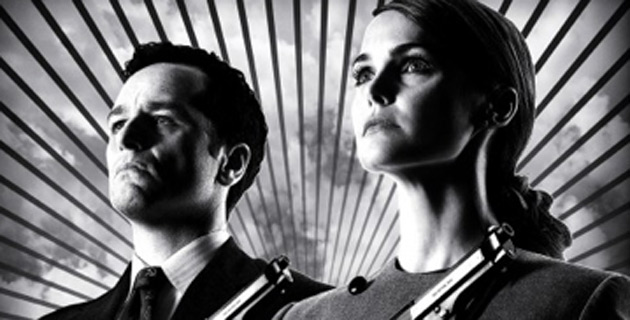 “The American people have elected a madman as their president,” a softly bearded Russian general says to KGB officer “Elizabeth Jennings” (played by a terrific Keri Russell), in obvious reference to The Gipper. The general continues: “He makes no secret of his desire to destroy us. Our war is not so cold anymore…Our enemy is strong and capable. We must meet the challenge.” The year is 1981, the Reagan era has dawned, and communist sleeper agents are apparently running around Washington, raising their families and seducing Justice Department officials.

The Americans, a new series premiering tonight at 10 p.m. ET on FX, focuses on Elizabeth and her husband and partner-in-counterintelligence-crime Phillip (Matthew Rhys, the “Welshman who plays a Russian playing an American“). Their marriage was arranged by the KGB during the Khrushchev era. The two live in an upper-middle-class neighborhood with a young daughter and son, both of whom are blissfully ignorant to mommy and daddy’s real allegiances. For years, the duo has hidden in plain sight, running a small travel agency, while fulfilling their mission to subvert the United States government and funnel valuable information back to the Kremlin. Elizabeth is the true believer of the household: “I would go to jail, I would die, I would give up everything before I would betray my country,” she shouts. Phillip is the non-ideologue who is far more interested in his family than in ensuring Soviet global domination: “America’s not so bad. We’ve been here a long time; what’s so bad about it, you know? The electricity works all the time, the food’s pretty great, the closet space…”

The Americans is one of the best new offerings on television this season. Its gritty, anxiety-packed espionage bristles with the energy appropriate to a taut suspense thriller. The family drama and the spy games of the first two episodes—penned by series creator (and author and former CIA officer) Joseph Weisberg—are convincing, including the efforts to bug Secretary of Defense Caspar Weinberger’s Washington estate. The mood of casual paranoia, on both sides, during the tail end of the Cold War is exquisitely conjured. The Greatest Cultural Hits of the ’80s are gracefully trotted out, from the music of Quarterflash to Reagan’s Star Wars initiative. And the supporting players, such as Noah Emmerich as an FBI agent who may or may not be on the Jennings’ trail, are adroit.

But the cleverest thing about the series is how it will likely get American audiences rooting for these communist lovebirds. The leads are relatable, they’re alluring, and they’re hugely sympathetic. Of course, none of this sympathy is based on anything ideological (far-left authoritarianism, after all, isn’t the most attractive political alternative these days). But even as Elizabeth and Phillip are, you know, trying to bring down America from within, their humanity persuasively shines through—in their sporadic compassion, their genuine affection for one another, and their doubts. The scene in the pilot in which the two have a debate in their laundry room over whether or not to defect to the feds is powerful stuff. The Americans balances secret-agent slugfest and examination and humanization of the American enemy in a way that hasn’t been been accomplished this well since Showtime cancelled Sleeper Cell after two seasons. And watching Liz and Phil use dirty tricks, sex, and blunt force to obtain intel for Brezhnev, all the while navigating a complex romance and the tensions of suburbia, could fast become one of the most addictive TV pastimes this season.

Matthew Rhys is casting perfection, but it’s Keri Russell who steals every minute of the show. Those surprised that Felicity Porter would make such a good Soviet spy haven’t been paying attention to her work over the last decade. Movies like The Upside of Anger, Waitress, and Mission: Impossible III highlight her range and effortless charisma; The Americans brings those qualities, and then some, to the fore—whether Elizabeth is attempting to connect with her teenage daughter or angrily kicking the crap out of a Russian traitor in their garage.

The first few episodes of The Americans have more riveting combat, sweet revenge, and plenty more namechecks of Ronald Reagan.

“You hear Reagan ranting and raving; he’s crazy. The man literally wants to destroy us,” Elizabeth remarks in casual conversation with her seemingly ambivalent spouse.

So if you absolutely are not okay with possibly cheering on sneaky commie saboteurs of liberal democracy who shit-talk Reagan, then perhaps don’t tune in. But my advice is to suck it up and watch.

Click here for more TV and movie features and here to read more of Asawin’s reviews.