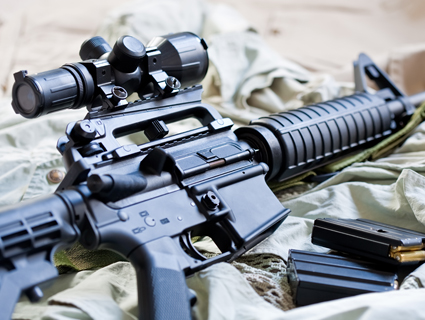 The problems with the 1994 assault weapons ban, according to its supporters, were twofold. The first was that gunmakers could—and did—simply modify their semiautomatic weapons to fit the law by eliminating cosmetic features. An AR-15 without a bayonet mount is still an AR-15; it’s just marginally less effective in hand-to-hand combat with Redcoats. That second problem with the ban was that it ended, sunsetting in 2004.

At a Capitol Hill press conference on Thursday to introduce new legislation banning assault weapons, Sen. Dianne Feinstein (D-Calif.) promised that she and her colleagues had learned from their mistakes. “One criticism of the ’94 law was that it was a two-characteristic test that defined [an assault weapon],” Feinstein said. “And that was too easy to work around. Manufacturers could simply remove one of the characteristics, and the firearm was legal. The bill we are introducting today will make it much more difficult to work around by moving a one-characteristic test.”

And unlike AWB 1.0, Feinstein explained, this one wouldn’t expire in 10 years: “No weapon is taken from anyone,” she said, but “the purpose of this bill is to dry up the supply of these weapons overtime, therefore there is no sunset on this bill.”

Feinstein’s bill, like the original version, includes a ban on the manufacture and importation of high-capacity magazines, defined as any feeding container holding more than 10 bullets—something gun-control advocates point to as one of the success stories in the 1994 law. It would also close a loophole that legalized the slide iron stock, which as my colleague Dana Liebelson reported, allows gun-owners to convert their firearms into fully-automatics weapons—legally.

But the package faces stiff opposition, including from some Democrats. Sen. Max Baucus (D-Mont.) recently lamented “one-size-fits-all directives from Washington,” and Sen. Joe Manchin (D-W.V.), who initially seemed receptive to limits on assault weapons and high-capacity clips, has since clammed up.

Even if Feinstein’s bill does make it through Congress, though, there’s still an open question as to what it would actually accomplish. Although Sen. Richard Blumenthal (D-Conn.) suggested on Thursday that the ban might have saved “hundreds of thousands” of lives had it never gone away, a 2004 University of Pennsylvania study commissioned by Department of Justice was much more reserved: “We cannot clearly credit the ban with any of the nation’s recent drop in gun violence. And, indeed, there has been no discernible reduction in the lethality and injuriousness of gun violence.”