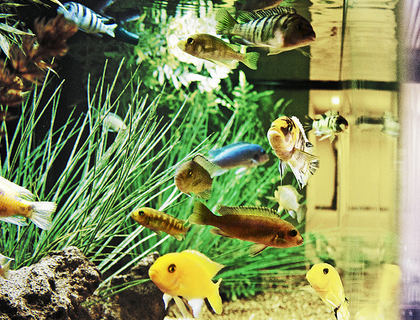 Have a freshwater fish tank at home? Stop petting Nemo and Wanda for a minute, and take a deep breath. Ornamental fish in the US, many of which come from Asia, are hosting antibiotic-resistant bacteria which could spread diseases to their human owners, a new report put out by researchers at Oregon State University reveals.

“The range of resistance is often quite disturbing,” the authors wrote in their report, which was published in the January edition of the Journal of Fish Diseases. “Imported ornamental fish are commonly colonized with bacterial species of potential human and animal harm.”

The researchers examined 32 freshwater fish, including common household species like neon tetras, cory catfish, and flame gouramis. They found that the fish, which came from Colombia, Florida and Singapore, had antibiotic-resistant bacteria that could potentially spread to humans, including Staphylococcus, which causes Staph infections of the skin; Aeromonas, which gives you stomach flu symptoms; and a type of Mycobacterium that causes skin lesions (not to be confused with the kind that breeds tuberculosis.)

The fish were most resistant to the antibiotics Tetracycline, which is used to treat infections like chlamydia in humans, and Bactrim, which is often used to treat women’s urinary tract infections and bronchitis. The authors point out in the report that “this is not surprising considering the widespread use of these classes [of antibiotics] in the ornamental fish industry.” However, the researchers also found that the fish were resistant to some antibiotics that aren’t commonly used. “We don’t know why that is, it could be industry testing that’s going on somewhere,”  Tim Miller-Morgan, a veterinary aquatics specialist with Oregon State University who co-authored the report, told Mother Jones. The report notes that frequent and unregulated use of antibiotics is a growing problem in the ornamental fish industry, which is worth about $900 million.

But there is good news: Miller-Morgan says that “the overall risk to human from these infected fish is low,” although he suggests that individuals who have compromised immune systems consult their doctors, and people with open wounds refrain from cleaning their fish tanks. “You just need to be aware,” he says. “I wouldn’t stop keeping ornamental fish.”

But if, after reading this report, you’re hell-bent on getting rid of Goldy and Phish, you can always copy what the scientists did: Kill them “via decapitation followed by exsanguination” and then cut out their kidneys.* “This is the quickest, most humane way to kill the fish,” given that “results can be compromised when an anesthetic is used,” Miller-Morgan says.

This is why I’m not a biologist.

*Please don’t actually do this to your pets.