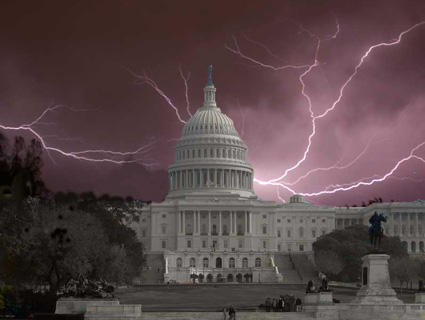 “The best that can be said about this session of the 112th Congress is that it’s over,” League of Conservation Voters President Gene Karpinski said this week.

The sentiment comes in reaction to the League’s 2012 Congressional Scorecard, released on Wednesday, which showed that in a year that saw record breaking heat waves, drought, wildfires, Hurricane Sandy, and other climate-change fueled disasters, the Republican-led House of Representatives came out with the worst environmental record ever.

The League tallies its scores by looking at each member of congress’ votes on laws that have major environmental implications. Last year, the House put forth more than 100 bills, riders, and amendments related to the environment and public health, mostly with harmful effects. On top of that, House Republicans’ proposals sought to trample on virtually every area related to the environment, from rolling back EPA safeguards for waterways and wildlife that stand in the way of the pursuit of coal, to limiting the president’s power to preserve land as National Monuments. Not even the sea turtles were safe. Rep. Jeff Landry (R-La.) offered an amendment to a bill that would prohibit the National Oceanic and Atmospheric Administration from enforcing a rule that prohibits fishermen from snaring the endangered reptiles in their nets. (The amendment was later dropped.)

The league credited the Senate and the Obama Administration for batting down many of the most appalling affronts to the environment, but a few slipped through. What is striking in the data is how starkly the scores fell along party lines. House Democrats had an average score of 82, while their Senate counterparts scored 89. House Republicans had a score of 10, while GOP Senators’ average was 17. 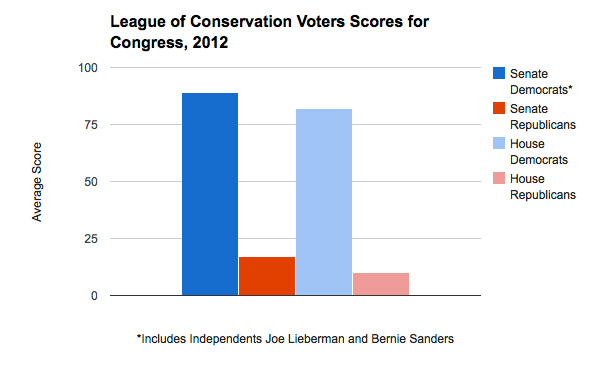 The divide is also reflected in the scores of party leadership. Democrats Senate Majority Leader Harry Reid and Majority Whip Dick Durbin were both deemed environmental champions by LCV with perfect scores of 100, while Republican Senate Minority Leader Mitch McConnell and Minority Whip Jon Kyl both had dismal scores of 7, only voting for two eco-friendly measures that also concerned subsidies for farmers.

In the House, Democratic Minority Leader Nancy Pelosi scored 94 and Minority Whip Steny Hoyer scored 91 for their attempts to stem the deluge of environmentally corrosive laws. Republican Majority Leader Eric Cantor scored 3, voting against or abstaining on everything except flood insurance reform, and Majority Whip Kevin McCarthy scored 6, voting against the protection of the water supply in his home state of California. (Speaker of the House John Boehner got a pass because the speaker votes at his own discretion.)

“These issues have traditionally been bipartisan,” Jeff Gohringer, spokesperson for the League, said. “Now members of Congress are standing up for the polluter agenda over the desires of their constituents. It’s been taken to a whole new level in terms of the extreme leadership in the Republican Party in the House. They’ve cemented their position as the worst House ever in the face of historic extreme weather all across the country.”