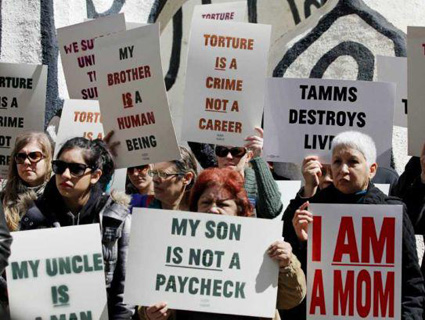 On January 4, the Tamms Correctional Center, a supermax prison in southern Illinois, officially closed its doors. Tamms, where some men had been kept in solitary confinement for more than a decade, was notorious for its brutal treatment of prisoners with mental illness—and for driving sane prisoners to madness and suicide.

The closure, by order of Gov. Pat Quinn, was celebrated by human rights and prison reform groups, and by the local activists who had fought for years to do away with what they saw as a torture chamber in their backyard. But it might have been accomplished sooner were it not for a competing progressive faction: Big Labor.

The major force holding up Tamms’ closure was the American Federation of State, County, and Municipal Employees (AFSCME), which, according to its website, represents 85,000 corrections employees nationally. The union challenged Quinn’s order through its legislative allies, stalled it via the courts, and mounted a public campaign to keep Tamms open. It was perhaps the most visible and contentious example of a phenomenon seen, in one form or another, around the country: otherwise progressive labor unions furthering America’s addiction to mass incarceration. In terms of prisoners rights in general, and solitary confinement in particular, unions are seen as a major obstacle to more-humane conditions.

With its more than 1.6 million total members, AFSCME has played an important role over the decades in securing basic rights for all sorts of government employees. The Memphis march that ended in the assassination of Dr. Martin Luther King Jr. was in support of an AFSCME strike. More recently, the union helped put (and keep) President Obama in office. It also is a key backer of health care reform and, during a period of labor decline, remains the biggest organizing union in the AFL-CIO.

In a Chicago Sun-Times op-ed, scholar-activist Stephen F. Eisenman of the pro-closure group Tamms Year Ten pointed out that the union wasn’t always so reactionary. In the ’60s and ’70s, Eisenman wrote, “AFSCME’s leadership understood that workers’ rights and human rights were inseparable.” Then-union president Jerry Wurf, he added, tempered his zeal for organizing with compassion.

When the big psychiatric hospitals, such as New York’s Creedmoor, were being decertified, he did not argue to keep them all open. Instead, he fought to ensure that de-institutionalized mental health patients received adequate community and home care. Because he knew these hospitals were hellholes, he was willing to sacrifice some union jobs for the good of people with mental illnesses. But Wurf lost that battle. The national recession of the 1970s intervened, and a generation of patients were turned out in the streets without proper support. These are precisely the people who now fill our nation’s jails and prisons.

“Torture Is a Crime—Not a Career,” read the protesters’ signs. “My Son Is Not a Paycheck.”

Today, in contrast, AFSCME fights to keep these prisons open even when no jobs appear to be at stake*. All of Tamms’ union employees were guaranteed placement in other facilities, and no positions were lost due to the closure. But the union argued that conditions at Tamms—widely denounced as cruel, inhumane, and ineffective—were necessary for safety and security, and that the prison was needed to keep jobs in southern Illinois. Tamms Year Ten countered with protests where prisoners’ relatives hoisted signs bearing slogans like “Torture Is a Crime—Not a Career” and “My Son Is Not a Paycheck.”

AFSCME is just one of four large national unions—among them Service Employees International Union (SEIU), American Federation of Government Employees (AFGE), and the Teamsters—representing prison workers. And corrections officers in a number of states and even some local jail systems have their own powerful unions.

With public-sector unions of all stripes under attack, there is an inclination to protect members at all costs. In some areas, this has led correctional-workers unions to join with prison reformers. They share concerns about overcrowding and understaffing, for example. In the case of Brown v. Plata, wherein the US Supreme Court ordered California to reduce overcrowding in its prisons, the California Correctional Peace Officers Association (CCPOA) described “an overcrowded, inadequately staffed system that cannot deliver adequate medical care in spite of the best efforts of prison employees.” As one corrections officer explained at trial, there are “way too many inmates in that small of a space to do the job.”

Naturally, prison reformers and unions both oppose privatization. The unions have largely kept private prison companies at bay in big states such as California and New York, and recently even managed to keep them out of Florida. “Privatizing prisons for profit is immoral,” says AFGE’s Dale Deshotel, who wrangles prison-union locals on behalf of the national union. “If you break the law then state or government should handle that function.” Private prisons, he continues, are “a moneymaking project. In private prisons there is no programming for rehabilitation, for education.” Adds SEIU spokeswoman Kawana Lloyd: “The for-profit companies reduce safety, bring down standards, and have corrupt relationships with politicians.”

Yet whether prisons are public or private, preserving jobs generally means locking away as many people as possible for as long as possible—contrary to the goal of reducing mass incarceration. California’s prison guards union, for example, was one of the primary sponsors of the proposition that brought about Three Strikes in the 1990s. In the aughts, the union opposed parole reform and vigorously campaigned to defeat politicians it regarded as soft on crime. It has also supported the death penalty, despite the staggering cost to state taxpayers.

Membership in the California prison guards union, which has pushed for tough sentencing, has more than sextupled since 1982.

All of this fueled the CCPOA’s rapid expansion: Membership more than sextupled between 1982 and 2011 (from roughly 5,000 to 31,000 members) and its annual budget ballooned from roughly $500,000 in the early ’80s to more than $23 million today. The earlier number was provided by Joshua Page, a University of Minnesota professor and author of The Toughest Beat. Page, who has written extensively about the state prison guards’ union, says the CCPOA seems to be softening some of its positions of late, but it remains a potent political force in California, which has America’s largest prison population. (The $23 million figure is a conservative calculation from the policy group California Common Sense; the CCPOA would not provide a current budget figure.)

As strapped states and localities look to their corrections budgets for savings, unions have fought proposed facility closures and the establishment of programs that would divert offenders into treatment and other lockup alternatives. They have frequently opposed reforms that could affect their members’ autonomy, including oversight programs designed to curb abuses by prison employees.

Several unions have attempted to counter the growing tide of reformers who condemn long-term solitary confinement as not only torturous but also counterproductive to prison safety. In fact, states that have dramatically reduced their use of isolated confinement have seen prison violence drop. Yet in Illinois, AFSCME continues to claim that closing the Tamms has put its members’ lives in danger. And in New York City, the powerful Correction Officers Benevolent Association pushed hard for the construction of nearly 1,000 new solitary-confinement cells on Rikers Island, blaming a rise in prison violence on a supposed shortage of isolation beds.

In Maine, state corrections commissioner Joseph Ponte, who has gained a reputation for cutting back on the use of solitary at Maine State Prison, recently fired the union-backed, old-school warden Patricia Barnhart and replaced her with a reformer, Roy Bouffard. “I’m definitely going to soften” the prison, Bouffard told the Portland Phoenix.

“In many cases I wish we had the space for solitary confinement,” says a union spokesman. “Some of them deserve to be alone.”

Officially, most of the national unions say they have little interest in solitary confinement. “We have not taken a position nationally,” says Chris Fleming, a DC spokesman for AFSCME. Neither has the SEIU or the Teamsters, according to their spokespeople.

Deshotel, the spokesman for the American Federation of Government Employees, which represents 24,000 federal prison employees, had more to say about it. “In many cases I wish we had the space for solitary confinement,” he told us in a phone interview. “Some of them deserve to be alone. They are very dangerous. In fact, in some of our prisons we’ve got to keep them separated because of the possibility they would hurt one another or create problems for us. I do know people should be treated with dignity. However, a person in prison for violent acts and cannot control himself or herself, there are times they need to be isolated.”

He continued: “It does have an effect on a human being. We are not built that way, created that way, to live in isolation. However in a prison setting where an individual refuses to program or cooperate, if we had the opportunity, we would use it much more. But we are so overcrowded that our hands are tied. We struggle to find the empty space to isolate some of these people, people who can’t function we cannot tolerate. And we will not tolerate it. That’s different from putting someone in a room for no real reason.”

In local fights over solitary, labor unions have landed squarely in favor of maintaining, if not expanding, its use. And in Illinois, AFSCME has yet to give up its PR campaign against the closure of Tamms*. The union recently sought to link the closing to assaults on corrections officers at other state prisons—even though none of the assailants had come from Tamms.

Read a response to this article from AFSCME’s Council 31.

*Correction: Due to errors introduced during the editing process, an earlier version of this story stated that, with no jobs at stake, AFSCME was apparently fighting Tamms’ closure to prevent its members from having to relocate. The union has cited relocation as a concern, but the safety of its members was the primary issue. The story also mistakenly said that Tamms would reopen as a federal supermax; it was Thomson Correctional Center, another state prison, that was acquired by the feds.