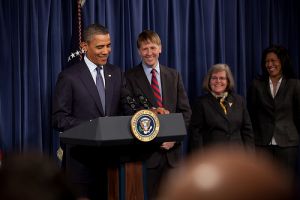 A little more than a week after Senate Democrats decided not to weaken the filibuster, Republicans are vowing to filibuster President Barack Obama’s nominee to head the Consumer Financial Protection Bureau unless its powers are reduced, Reuters reports.

The CFPB was created as part of the 2010 financial regulation bill specifically to prevent financial institutions from engaging in the kind of exploitative practices that helped lead the country to the brink of economic collapse in 2008. Since January 2012, when Obama appointed former Ohio attorney general Richard Cordray to head the bureau, it has done exactly that—reigning in unscrupulous mortgage lenders, credit card companies, and debt servicers. But the CFPB has only been able to do those things because Obama, using what’s called a recess appointment, installed Cordray in his post while most of Congress was on vacation—an attempt to bypass Senate Republicans’ efforts to block the nomination. Before Cordray was picked and blocked, Republicans had vowed to filibuster Elizabeth Warren, who came up with the idea for the bureau and helped found it, too. That didn’t go as well as they had hoped: Warren recently returned to the chamber as the new Democratic Senator from Massachusetts.

Last week, a DC Circuit Court panel made up of conservative Republican-appointed judges ruled that Obama’s appointments to the National Labor Relations Board (made at the same time as Cordray’s) were unconstitutional. Although the Constitution allows the president to make temporary appointments while Congress is in recess, the court ruled that a GOP procedural gimmick of holding brief sessions for the express purpose of blocking Obama from making recess appointments meant that Congress was technically not in recess. Not only that, but the court also so narrowed the criteria for making a recess appointment that most of the recess appointments made by Republican or Democratic presidents over the past hundred years could be considered illegal and unconstitutional.

Senate Republicans want three big changes before they’ll stop blocking Cordray. First, they want the CPFB to be by Congress rather than the Federal Reserve. Subjecting the bureau to the congressional appropriations process would compromise its political independence. Second, Republicans want the range of financial institutions the bureau has authority to regulate narrowed. This would leave unsupervised some of the problematic institutions the bureau was created to regulate. The GOP also wants to replace the single director with a board of directors, which would hamper the ability of the bureau to make decisions. Finally, the GOP is demanding that other bank regulators—the same ones who failed to prevent the 2008 financial meltdown—be allowed to chaperone the CFPB by “verifying” that its rules “would not harm the safety and soundness of banks.” This would let regulators who turned a blind eye to exploitative practices in the past because they were profitable tell the CFPB what to do—and the more different regulators have to approve of a rule, the more convoluted and less effective it is likely to be.

Blocking Cordray could leave the CPFB without most of its powers to regulate the very financial institutions whose practices helped lead the country into near-economic collapse in 2008. That’s just how Republicans want it. Having failed to prevent the financial regulation law from being passed, they are now seeking to nullify it through procedural extortion.

This post has been edited to reflect the fact that Senate Republicans are also demanding that the single director be replaced with a board.