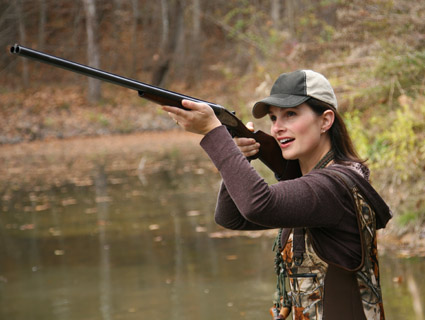 How many hunters are there? In 2011, according to the US Fish and Wildlife Service (PDF), 15.7 million Americans older than six went hunting. That’s nearly 29 million less than went fishing, and 3 million less than went out to watch birds. Back in 1955, about 10 percent of Americans hunted; today it’s around 6 percent. Overall, the number of hunters began to dip in the ’90s but has slowly increased in the past few years. 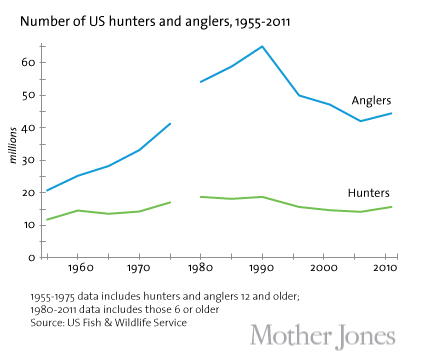 Who hunts? The FWS’s latest survey finds that hunters are 89 percent male and 94 percent white. More than half are 45 or older. Nearly 60 percent live in small metropolitan areas or rural areas. Similarly, about 80 percent of all gun owners are men, and they have been getting older as their numbers have fallen. (Around 35 percent of Americans say they own a gun.) A recent National Rifle Association (NRA) survey of its members found that nearly half identify as hunters and that they, like hunters in general, are largely from small towns and rural areas.

What do they hunt? More than 80 percent of hunters go after big game such as deer and elk. About 4.5 million hunt small game such as squirrels; 2.6 million hunt ducks and other birds, and 2.2 million go after other animals like feral pigs.

What do they shoot? Ninety-three percent of hunters use rifles or shotguns. In 2011, they spent more than $4.3 billion on firearms and ammunition. That makes them a significant part of the nearly $12 billion US firearms market, but they’re not driving it. A 2010 survey by the National Shooting Sports Foundation (NSSF) found that most Americans buy guns for protection; less than a 30 percent of those who recently bought a gun got it for hunting. Which may explain why the NRA has been focusing less on hunting and more on protecting the market for lucrative assault rifles and handguns. Just 6 percent of semi-automatic rifle owners told the NSSF that they were primarily used for hunting. 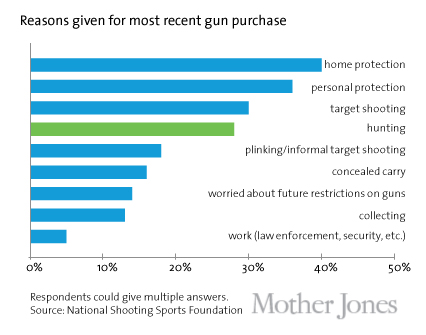 How do non-hunters see hunting? In a 2011 NSSF survey, 73 percent of respondents said they had no interest in ever going hunting. Yet even if they don’t do it themselves, most Americans have a positive view of hunting: 74 percent said they approve of it. But hunting isn’t America’s most popular wildlife-related recreational activity: It’s fishing, which 98 percent of Americans have no problem with.