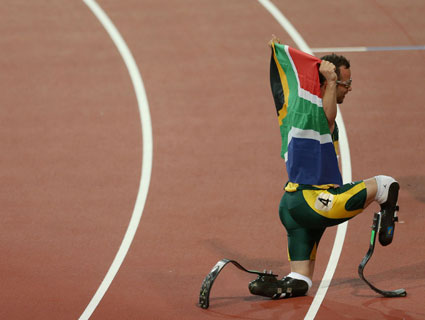 South African sprinter Oscar Pistorius, the first double amputee to compete in the Olympics, has been charged with murder for shooting his girlfriend, model Reeva Steenkamp, early this morning. While initial reports suggested that the 26-year-old athlete had mistaken Steenkamp for a burglar, the BBC reported that authorities were skeptical: “Police say neighbours heard screaming and shouting around the time of the shooting, and that they had been called to investigate incidents of a domestic nature at the same house in the past.”

Pistorius’ ownership of and affinity for guns has been well documented by journalists, including the New York Times Magazine‘s Michael Sokolove and others. Check out this tweet from last November:

Nothing like getting home to hear the washing machine on and thinking its an intruder to go into full combat recon mode into the pantry! waa

(Following the shooting, Nike pulled a South African TV ad featuring Pistorius and the tagline “I am the bullet in the chamber.”)

The shooting is the most high-profile case from a country that, like the United States, has recently grappled with the impact of its well-established gun culture. Interestingly, firearms are not mentioned in the South African constitution, and a tough gun control law was passed in 2000. When it went into effect five years later, it put a five-gun limit on most citizens, allowing just one gun per person for self-defense purposes. As the Times explained:

But getting any gun at all, critics say, is the big task. Guns are to be automatically denied to drug or alcohol abusers, spouse abusers, people inclined to violence or “deviant behavior” and anyone who has been imprisoned for violent or sex-related crimes. The police interview three acquaintances of each applicant before deciding whether he or she is competent to own a gun. Prospective gun owners must pass a firearms course. They also must install a safe or strongbox that meets police standards for gun storage.

South Africa now ranks 50th in the world in gun ownership rates, and gun-related crime has dropped 21 percent since 2004-05. Shooting murders of women, particularly by their partners, has dropped, as shown by this chart from a 2012 report (PDF) by the South African Medical Research Council. (Murders by partners are called “intimate femicides.”) 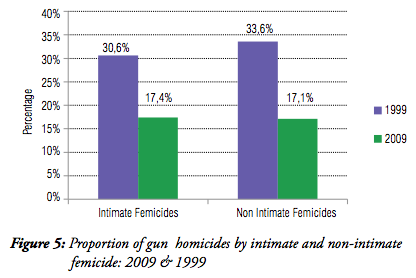 Still, in 2007, the country’s gun homicide rate was among the highest in the world, ranking 12th at 17 gun murders annually per 100,000 people. To put that statistic in context: In 2007, there were 8,319 gun deaths murders in South Africa, a country of roughly 49 million people. The United States—No. 1 in gun ownership, and with more than six times as many people—had 9,960 gun deaths homicides in 2012.

In many ways, American and South African gun culture and gun violence are quite different. But the possibility that Pistorius intentionally shot and killed Steenkamp brings to mind two of the most prominent pro-gun myths: namely, that keeping a gun at home makes you and your loved ones safer, and that guns make women safer.