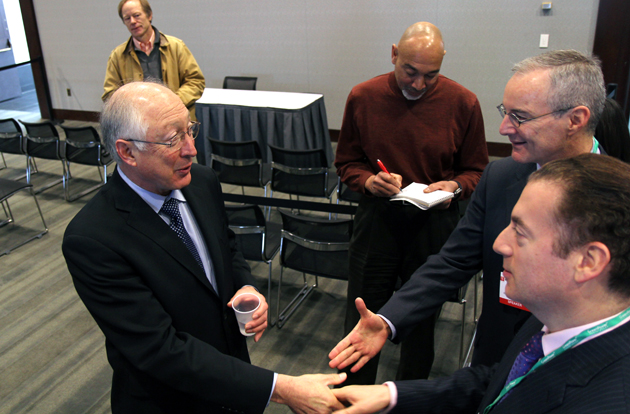 Ken Salazar confers with the heads of Cape Wind, which he predicts will this year become the US's first offshore wind farm to break ground. Tim McDonnell/Climate Desk

If you aren’t happy with President Obama’s plan for powering the US, don’t hold your breath for any changes in his second term.

Speaking today to a conference of leaders of the offshore wind industry in Boston, outgoing Secretary of the Interior Ken Salazar hinted at the nation’s energy future. “It’s going to be very much a continuation agenda,” Salazar said of Sally Jewell, Obama’s pick to succeed him.

Salazar noted with pride how in Obama’s first term, the equivalent of 30 fossil-fuel-fired power plants worth of renewable energy projects have been approved for public lands, a trend he’s confident will continue into the future. But stashed away in his remarks was also a renewed commitment to growing fracking nationwide and oil drilling in the Alaskan arctic, two key aspects of Obama’s “all-of-the-above” energy policy that have drawn fire from environmentalists, and which Salazar equated with renewables as “very important” components of America’s energy plan going forward.

Salazar: Obama’s second term is “going to be very much a continuation agenda.”

Salazar, making a rare public appearance without his signature Stetson hat, closed his speech with an excerpt from Obama’s recent State of the Union address, wherein the president called on America to be a leader on renewables. But later, speaking to reporters, Salazar expressed ambivalence about the Keystone XL pipeline, saying only that he supported the president’s review process and he trusted incoming State Secretary John Kerry, with whom the ultimate call on Keystone XL rests, to make the right decision. He also sidestepped a question about the risks of fracking, saying that “shale gas has a lot of promise for energy security in the US. We will be implementing an agenda that takes advantage of it all.”

During his time in Obama’s cabinet, Salazar embraced climate change as an issue, overseeing the granting of the US’ first two offshore wind permits and helping to draft a regulatory structure for building solar farms, wind turbines, and other renewable energy projects on the 250 million acres of public land managed by his Bureau of Land Management. But Salazar also signed off last year on permits for Shell to drill for oil off Alaska, and has indicated that more Arctic drilling is likely, despite Shell’s comedy of errors there this winter.

Still, Salazar said he was optimistic that Cape Wind, the first proposed offshore wind project in the US, would finally break ground this year after over a decade of lawsuits and permitting holdups. Salazar’s department has purview over some 1.7 billion acres of federally-managed sea floor, and is thus a key player in the ongoing struggle to spark a domestic offshore wind industry. Last year the US added more (onshore) wind energy than any other single source, but offshore wind continues to prove elusive here, even while it explodes in countries like the UK and Germany—a single offshore turbine has yet to be installed in the US.

If Salazar’s prediction pans out, it will be a relief for Cape Wind’s developers; Cape Wind President Jim Gordon bemoaned the “Kafka-esque loop” he’s been stuck in since 2001, fighting off over a dozens lawsuits (much of the opposition to Cape Wind, it must be noted, is funded by fossil-fuel scion William Koch, who also happens to own a $20 million beachfront estate on Cape Cod not far from where the proposed wind farm would be installed).

Getting Cape Wind up and running would also be a nice bookend for Salazar’s White House career, and could be a tangible monument to the climate action he and Obama have become increasingly fond of professing—even if it comes hand-in-hand with oil and gas.

“We know the reality of climate change is something we have to address here in this country,” Salazar said. “The effort we’ve initiated over the last four years is an effort that will continue.”