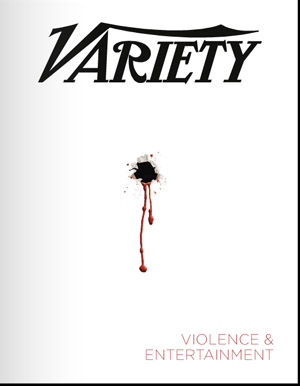 In June 1968, Bill Bell, a writer for Days of Our Lives, penned a short open letter to the TV and film industry and printed it in Variety. Spurred by the “insane, violent” deaths of Martin Luther King Jr. and Bobby Kennedy, Bell called upon his colleagues to “recognize our responsibilities and take decisive steps to temper and hopefully eliminate violence from our programming.” Bell argued that much onscreen violence was not simply gratuitous, but artistically bankrupt. “As a writer, I know that…you can have conflict without violence,” he wrote (emphasis his). “And that invariably it is finer drama.”

The letter is reprinted in a new, glossy issue (digital version here) of the venerable showbiz rag that explores the claims, expressed most recently by the NRA’s Wayne LaPierre, that the entertainment industry deserves some of the blame for mayhem like the Sandy Hook massacre. Instead of shrugging off the criticism, Variety editor-in-chief Timothy M. Gray embraces it and even echoes Bell’s message in his opening note: “Don’t underestimate your power or responsibility…When asked about violent or demeaning content, some in Hollywood shrug, ‘It’s what the public wants.’ But there is a fine line between catering to the public and pandering to their basest instincts.”

Variety asked nearly 50 “thought leaders” in the biz and on both sides of the gun debate to weigh in on the topic. Predictably, their perspectives vary widely. Breaking Bad creator Vince Gilligan defends violence as an essential part of his creative palette, a means for developing rich characterization or doing something “funny or simply cool.” Retired Army Lt. Colonel Dave Grossman insists that “very, very sick” video games and movies are driving “sick, sick kids” to commit mass murder. Variety contributor Chris Morris recommends that video game makers impose a temporary ban on releasing violent games immediately after mass shootings. Patti Davis recalls how her dad, Ronald Reagan, responded to sanitized TV bloodshed: “My father used to interrupt my viewing of TV shows like ‘Gunsmoke’ and ‘Wyatt Earp’ to tell me what would really happen if a bullet hit that cowboy in the shoulder or the leg. As I watched the wounded man grip his shoulder, my father would make sure I knew that in real life, his shoulder would have been blown off.”

A recurring question is why “liberal Hollywood” churns out so much violent content. “Hypocrisy,” snaps Mike Hammond of Gun Owners of America. Money is the most common answer. “I think that more than being liberal, Hollywood is capitalist,” says Tim League, owner of the Alamo Drafthouse theater chain and an NRA member. Peter Debruge, Variety‘s senior film critic, offers a critical look at the movie rating system, which has been handing out PG-13s to intense flicks like The Dark Knight Rises, ensuring that they will become blockbusters. No one mentions Hollywood’s long history of teaming up with the gun industry to make their wares seem simply cool. But Los Angeles Undersheriff Paul K. Tanaka offers reassurance that Hollywood executives “are responsible human beings. Does anyone really think they’re interested in creating more violence?”

These responses are accompanied by images from more than a century of virtual mayhem, from The Great Train Robbery to The Walking Dead. There are also plenty of graphics on media and violence—including some of Mother Jones‘ data on mass shootings, which is provided without a credit. (C’mon, isn’t Hollywood obsessed with intellectual property rights?) There’s no clear takeaway from all this except that Hollywood, or at least Variety, is taking violence Very Seriously. (A full-page photo of MLK flanking Gray’s introduction brings the point home.) Yet the entertainment industry ass-covering is outweighed by an honest discussion of the tension between creative freedom, social obligations, and business models.

Gray exhorts his friends in Hollywood to “take action now,” even if it takes a generation. It’s not exactly clear if he’s talking about pushing for more gun laws or producing more of the “finer drama” Bell called for nearly 45 years ago. Yet his sense of the pace of cultural change suggests that in a few decades, this issue of Variety may not be a relic.