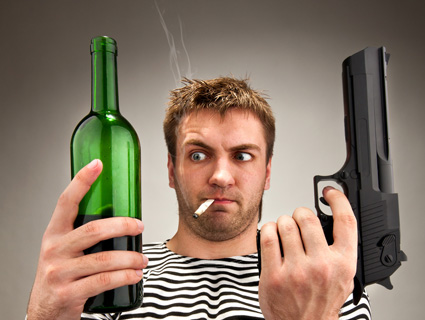 In the wake of the Newtown massacre in December, lawmakers in nearly every state in the nation have introduced gun legislation, either to strengthen gun controls or push back against them. There has also been a flurry of activity in local jurisdictions. Some of the proposals fall into the category of reasonable policy ideas, while others just seem to fire wildly, in both political directions. Here are 10 of them:

Glocks and gimlets: Allowing guns in bars has become something of a trend lately. A bill introduced in South Carolina would legalize concealed carry in bars and void the current law punishing the same with a fine of up to $2,000 or three years in jail. Gun owners would be required to remain sober, but the prospect of patrons packing heat in places where alcohol and attitudes mix remains worrisome, especially as self-defense laws grow increasingly lax. Another bill awaiting approval from the state Senate in Georgia would allow guns in bars and churches.

K-12 teachers packing heat: Never mind that recently armed guards in schools have forgotten their guns in restrooms and fired them by mistake: Lawmakers in at least six states have pushed bills since Newtown to allow K-12 teachers to carry guns. A few school districts around the country already allow teachers to carry them; in early March, South Dakota became the first state to sign into law a bill explicitly giving all its teachers the right to do so.

Aiming for an A+ in target practice: In January, Republican state Sen. Lee Bright introduced a bill in South Carolina that would create an elective high school class on gun safety and the Second Amendment taught by police officers. The class would meet at a local gun range and let students fire away. One high school junior said she thought the law could make her school safer (even though students would only use the guns off campus), but told the local news station, “Just getting [guns] into the hands of certain students, that could potentially harm others.”

Anger management classes for ammo buyers: Florida Democratic state Sen. Audrey Gibson recently proposed a law that would outlaw the sale of ammunition to anyone in the state who hasn’t completed at least two hours of anger management training, regardless of prior history. Gibson said the bill was inspired by a teenager shot to death during an argument over loud music, and she just wanted ammo buyers to be “introspective.” Her detractors have called the bill unconstitutional and an “insult” to gun owners.

Felony charges for guns that fire more than one round: Gun enthusiasts got worked up about New York’s new assault weapons ban limiting magazines to seven rounds—the strictest in the nation—but consider this: Connecticut state Sen. Edward Meyer (D), a gun control advocate who also made news recently for wielding a BB gun in a church, proposed a bill in January that would make it a class C felony to own any gun made to fire more than a single round. The bill hasn’t gone anywhere, but if Meyer’s intentions were to rile up the right, he succeeded.

Busting business owners for banning guns: A bill introduced in January by Colorado state Sen. Kent Lambert (R) would require businesses open to the public to either allow concealed carry permit holders to bring their guns inside or hire armed security officers (one for every 50 customers). If a business fails to comply and violence on the premises ensues, the business would be held liable for any injuries or deaths that might’ve hypothetically been prevented by an armed citizen. “There’s a responsibility for businesses to provide some security when they have asked people not to defend themselves,” Lambert told KOAA News 5.

Felony charges for introducing gun control legislation: Last month, Missouri state Rep. Mike Leara (R) introduced a bill that would charge “[a]ny member of the general assembly who proposes a piece of legislation that further restricts the right of an individual to bear arms, as set forth under the second amendment of the Constitution of the United States” with a class D felony. In fairness, Leara told TPM that he had “no illusions” about the bill passing.

Sheriff visits in your living room: A bill to ban assault weapons in Washington, introduced by state Sen. Ed Murray (D), was roundly criticized by conservatives and liberals alike for violating gun owners’ civil liberties. The legislation allowed current assault weapon owners to keep their guns, but only if they allowed the local sheriff to inspect their homes once a year to ensure the guns were safely stored. Murray followed up with a revised bill without that language, telling the Seattle Times, “I have to admit that shouldn’t be in there.”

Rejecting or even arresting the feds: Speculating about a federal gun grab, lawmakers in at least 15 states have introduced bills aimed at barring officials from enforcing federal gun laws. In Montana, a voter referendum championed by gun lobbyist Gary Marbut would grant police the authority to arrest FBI agents trying to enforce gun laws and charge them with kidnapping. In Arizona, Richard Mack has called for his fellow sheriffs to refuse to enforce federal law. The proposals, the latest nullification protests against the Obama administration, would most likely be unenforceable since, well, they violate federal law.

Requiring literally everybody to have one: Next month, the city council of Nelson, Georgia, will vote on a law that would mandate gun ownership for the town’s “safety, security, and general welfare” and for “emergency management.” The proposal, modeled on a law in nearby Kennesaw, includes exemptions for felons, the mentally ill, and those who oppose guns. Towns in Idaho and Utah are considering similar laws. In Byron, Maine, population 140, a mandatory gun law was rejected even by the man who proposed it, after he concluded that he should have just made it a recommendation.