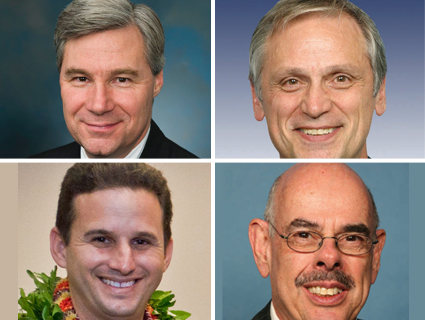 It’s been a few years now since Representatives Ed Markey (D-Mass.) and Henry Waxman (D-Calif.) led an ambitious but doomed charge to get a carbon-pricing bill through Congress.

But in the wake of President Obama’s climate-centric State of the Union and Inaugural addresses, a growing number of Democratic lawmakers are grinding out bills that would make polluters pay for their greenhouse gas emissions. Last month, Senators Barbara Boxer (D-Calif.) and Bernie Sanders (I-Vt.) announced plans to introduce a bill this spring to place a $20-per-ton tax on CO2, a move they argue could raise $1.2 trillion over the next decade. And today, Rep. Waxman, along with Senator Sheldon Whitehouse (D-R.I.), Representative Earl Blumenauer (D-Ore.), and Senator Brian Schatz (D-Hawaii), hopped on the bandwagon with their own draft carbon-pricing scheme. Waxman’s legislation hasn’t been formally introduced into Congress, but is open for public feedback until April 12.

The two bills both aim to confront climate change by harnessing the power of the free market, a spokesperson for Rep. Waxman said, but offer different mechanisms for doing so. The Waxman bill would target power plants, for example, while the Boxer bill would focus on “upstream” emitters like coal mines and oil refineries. But both bills are likely to undergo tweaks before being officially introduced.

The as-yet-unnamed Waxman bill would require the EPA and Treasury Department to collaborate on assessing how much big polluters are emitting, and levying an appropriate fee.

The exact price per ton of carbon pollution is still an open question (the lawmakers are seeking public input on this and other issues), but the draft bill purports to be based on the principle that “all revenue generated by the carbon pollution fee should be returned the American people.” Options for this could include using the money to lower the federal deficit, or helping the public shoulder higher energy costs.

Franz Matzner, a government affairs analyst for the Natural Resources Defense Council, said despite the bad track record for past bills like this, now isn’t the time to be cynical.

“Waxman and the others have done exactly the right thing in putting this bill out,” he said, “and reminding Congress that there’s important work to be done on their end for climate change.”