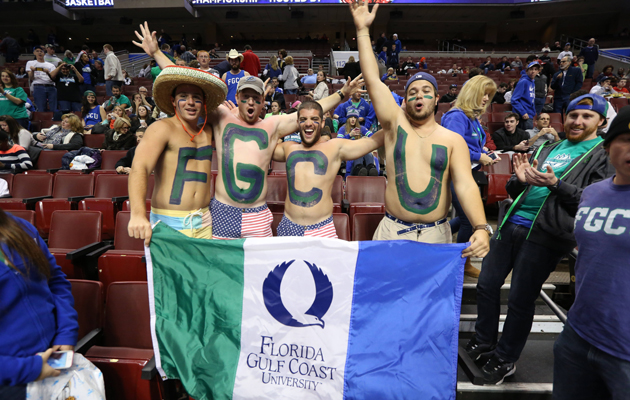 The Florida Gulf Coast University Eagles, the first 15-seed ever to reach the NCAA basketball tournament’s second weekend, are the toast of March Madness on the basis of their high-flying style (nickname: “Dunk City“) and up-from-nowhere story. Less than two decades ago, FGCU was little more than a collection of trailers looking out over a swamp. Today its hoops team is hanging with the heavyweights.

The less inspiring story, however, is how FGCU rose up out of the swamp. To put it bluntly: The school paved over it, using government connections to pressure the US Fish and Wildlife Service into green-lighting the development and in the process wiping out one of the last vital habitat areas of the severely endangered Florida panther. FGCU’s is a particularly extreme version of a familiar story. For a century, South Florida developers have stared down all comers—and methodically reshaped the environment in the process.

To get to the home of FGCU, take the Ben Hill Griffin Parkway south, drive past Ben Hill Griffin III Hall (one of the oldest academic buildings on campus), and park your car at Alico Arena, the state-of-the-art gym named for the agribusiness empire formerly run by Ben Hill Griffin III. Alico specializes in citrus, sugarcane, cattle, and, with a great deal of success, real estate development.

After Democratic Gov. Lawton Chiles approved the creation of a new public university in 1991, Griffin offered up Alico’s property in the town of Estero, on the condition that he be allowed to use the surrounding 16 square miles for his own development purposes. Griffin sweetened the deal with a $1.2 million gift to fund an environmental studies program and $1 million worth of materials to fill in the land to build the aforementioned environmental studies program. The site was ranked at the bottom of a list of three proposed locations and faced stiff objections from environmentalists and regional planners. That didn’t matter.

“Ben Hill Griffin just went in and lobbied different people and said this is what we want,” one environmental lawyer told the St. Petersburg Times. “And he got it.”

“The panther ain’t never been there, ain’t coming back,” Griffin said.

The state began moving ahead with plans to build the school in Estero, but there was a problem. Because the land was part of the Everglades ecosystem, federal law required the approval of both the Army Corps of Engineers (which enforces the Clean Water Act) and the Fish and Wildlife Service (which enforces the Endangered Species Act). Although the the Corps initially dragged its feet on the project, it eventually yielded under pressure from Republican then-Sen. Connie Mack.

(The location is visually striking, but not ideal. As the St. Petersburg Times reported, “Two months into construction, the site was flooded with three feet of water, and since it opened, the university has been caught three times illegally pumping water off its campus into adjacent swamps.”)

But the Fish and Wildlife Service was a tougher sell. After studying the proposal, and considering not just the impact of the university proper, but of the tens of thousands of acres that stood to be developed if it went forward, the agency did something it almost never does—especially in South Florida, especially in the 1990s. It issued a “jeopardy” draft opinion, finding that the placement of FGCU was “likely to jeopardize the continued existence of the Florida panther.”

The report carried with it a hint of doom. “It cannot be overly stressed that continued deterioration, fragmentation, or loss of habitat will reduce the South Florida panther population below the level essential for demographic and genetic health, leading to extinction,” read one underlined passage. The entire area studied by FWS, it concluded, would become uninhabitable to panthers.

But that didn’t sit well with Griffin, the university’s principal benefactor. As he put it, “The panther ain’t never been there, ain’t coming back.” He lobbied Democratic then-Sen. Bob Graham, who in turn pushed the FWS to reconsider its findings.

“They wanted the project and they weren’t concerned at all about the environmental effects,” said Andy Eller, a former FWS whistleblower who now works as a photographer in western Kentucky.

The FWS took another look and, this time, gave the project the green light. The agency relied on one of Eller’s colleagues, whose projections woefully overestimated the number of panthers in the wild and the range of their habitat. (The biologist in question later left his post to take a job as a consultant to developers.) Alico stock jumped 20 percent the week of the ground-breaking.

As Times‘ Michael Grunwald reported, the Corps approved virtually every Everglades development proposal that crossed its desk in the 1990s. The Fish and Wildlife Service wasn’t any better. “The FWS has a perfect track record of approving projects in the Florida panther habitat,” says Matthew Schwartz, executive director of the South Florida Wildlands Association. Eller could only think of a handful of cases in which the agency had even put up a fight—usually resulting in a deal in which developers set aside land to “offset” the effects of a project.

The University has taken some steps to mitigate the effects of its existence. Through a program called “Panther Posse,” FGCU students work with local schools to educate kids about the endangered panther and raise money to purchase infrared cameras for cat-monitoring. Alico has also, like other major landholders, sought to offset its environmental footprint by setting aside small preserves as panther habitat. But the effect, as Eller puts it, is like “punching holes in Swiss cheese”; panthers need large contiguous habitats to roam, not scattered oases.

No single piece of real estate development is responsible for killing of the endangered panther, but the cumulative effect of decades and decades of rubber-stamping is impossible to ignore.

“Eventually you’re gonna get to the point where the habitat is simply not large enough for an animal with a range as large as a panther,” Schwartz says.

And Griffin, who has given millions to the school and donated the 760 acres upon which the campus sits, has seen his investment pay off. Since the school’s doors opened in 1997, the 13,000 acres surrounding FGCU, nestled in the suburbs of Fort Myers, have boomed into housing developments, shopping centers, and enough golf courses to validate the university’s other nickname—Florida Golf Coast.

But it’s difficult to escape the Griffin legacy in Florida, where the family has been a political and economic force for nearly a century. Just consider the Eagles’ next tournament opponent. To get from FGCU to the home of the University of Florida Gators, the directions are pretty simple. Get back on the Ben Hill Griffin Parkway and head north (past Alico Road) and east (past the Ben Hill Griffin Jr. Citrus Hall in Lake Alfred) until you get to Gainesville. Park at the football field. You can’t miss it—it’s called Ben Hill Griffin Stadium.