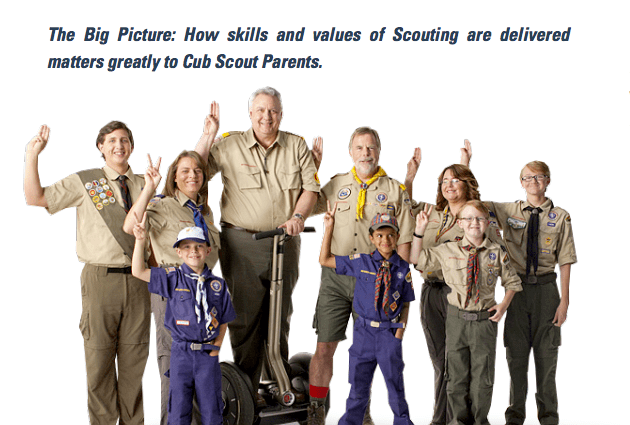 In the fall of 2012, months before the Boy Scouts of America announced it would consider overturning its decades-old ban on gay Scouts and scout leaders, the group sent a survey to Boy Scouts, parents, and scout leaders. The survey did not include a question about the ban, but it did ask respondents to explain what impacted their decision to recommend the Boy Scouts to their friends and families. Despite the open-ended nature of the question, around 5,500 (about eight percent) of the 68,441 respondents volunteered that the gay ban negatively affected their “customer loyalty” to the Boy Scouts. Only a tiny fraction of the respondents—a few hundred—expressed explicit support for the gay ban. Now a fight over how to interpret those results is brewing between the Boy Scouts and Scouts for Equality, an independent organization pushing for an end to the gay ban.

“The biggest takeaway from the survey is that there is a ton of energy in the scouting community for changing the policy,” says Zach Wahls, an Eagle Scout raised by two lesbian mothers, and founder of Scouts for Equality.

But Deron Smith, director of public relations for the Boy Scouts of America, tells Mother Jones that since the survey didn’t include any specific questions about the ban, and only nine percent of respondents brought it up in an open-ended question about why they would or wouldn’t recommend the Boy Scouts, “it is insufficient to accurately predict the beliefs of our membership as a whole.” The Boy Scouts’ summary of the survey also noted that people who were happy with Boy Scouts were less likely to comment on the ban, “perhaps since the reinforcement of the policy did not put the current status at risk.” In other words, because the Scouts hadn’t yet considered ending the ban when the survey went out, the Scouts and parents who back it didn’t feel they needed to express their support.

The politics of the gay ban have changed significantly since the fall survey. Several major funders, including UPS, United Way, Merck, and Intel dropped their support for the organization late last year, and in January, the Boy Scouts announced it would reconsider the policy. Since then, pop stars and Tex Mex fast food chains alike have joined the fight against the gay ban. What Scouts, leaders, and parents think about the ban should be clearer soon. A 2013 spring survey specifically addressing the ban was sent to about 1.1 million scouts and their families earlier this month. It includes questions like, “David, a Boy Scout, believes that homosexuality is wrong… Steve, an openly gay youth, applies to be a member. Is it acceptable or unacceptable for this troop to deny Steve membership in their troop?” The results of that survey are expected? April 4, just over a month before 1,400 members of the group’s national council will vote on whether to end the ban.

Even if the national ban on gay Scouts and Scoutmasters is lifted however, local troops could still decide for themselves whether or not to discriminate.

Wahls says that the fall 2012 survey indicates that even in conservative areas, there is still some support for overturning the ban. “I think we’ll see at least one inclusive unit in each state, and when people see that the unit is going to the same jamborees, it’s fundraising, it’s flourishing, they will realize that including gay youth and their parents makes the most sense… I had a lesbian den mother* [one of Wahl’s mothers], and she was great. It was the most fun unit.”

But just because the certain members support inclusive scouting, doesn’t mean that the ban is going to go down without a fight. On Saturday, Boy Scouts leaders and parents launched a national coalition to “keep sex and politics out of scouting” and “influence the resolution committee.”

“That’s the problem with folks who are intervening on the other side of this issue,” says Wahls. “This isn’t about scouting to them, this is about their problem with gay people.”

*A “den mother” is a term for the supervisor of a den of Cub Scouts. Wahl’s “den mother” was also one of his mothers.