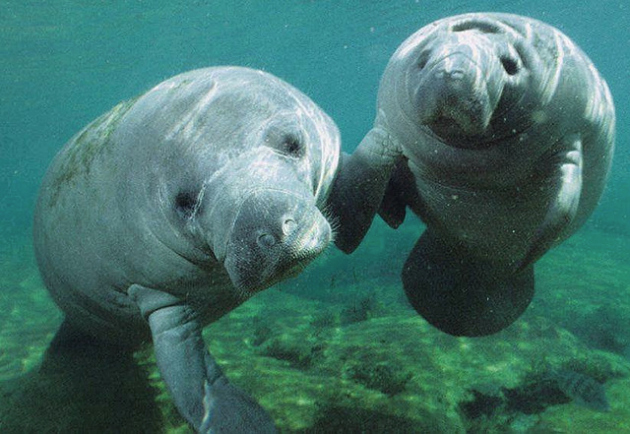 A record number of manatees—more than 180, and counting—have died so far this year from a red tide off the southwest Florida coast. These tides are caused by blooms of the alga, Karenia brevis, which produce a suite of neurotoxins (brevetoxins) deadly to fish, sea turtles, birds, and marine mammals. Red tides are harmful to people too, if you breathe enough of the aerosolized toxins or eat enough infected fish or shellfish. Now, from Craig Pittman at the Tampa Bay Times, we learn that a mysterious ailment is killing manatees off Florida’s other (east) coast too. There’s no red tide bloom underway there and no winter cold snap either:

So far… no sick manatees have been rescued, availing biologists with a live specimen to study for clues. They suspect the manatee deaths may be connected to back-to-back blooms of a [another species of] harmful algae, one that has stained the Indian River Lagoon a chocolate brown. Over the past two years the blooms wiped out some 31,000 acres of sea grass in the 156-mile-long lagoon that stretches along the state’s Atlantic coast. Manatees eat sea grass, but with the sea grass gone, they may have turned to less healthful sources of nutrition. 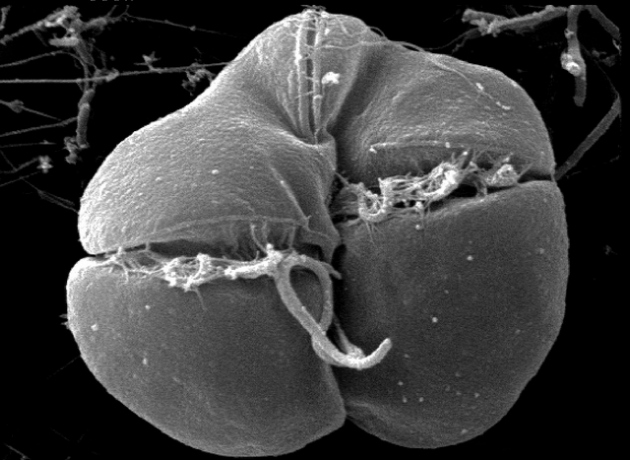 The dead manatees on Florida’s east coast appear to have gone into shock and drowned after eating algae. Researchers surmise the deaths are related to this abrupt dietary change. Furthermore, Pittman reports, more than 100 brown pelicans have been found dead in that same area since the start of 2013:

“The pelicans were emaciated and full of parasites. So far biologists don’t know what killed them or if there could be any connection with the dead manatees.”

There’s one big difference between the algae blooms on the east and west coasts—and that’s what’s causing them. The eastern bloom is fueled by nutrient pollution from storm runoff: a Miracle-Gro of fertilizers, sewage, manure, and pet wastes that fuels algae blooms. The cause of the western red tide is more muddled. According to the Mote Marine Laboratory:

?In contrast to the many red tide species that are fueled by nutrient pollution associated with urban or agricultural runoff, there is no direct link between nutrient pollution and the frequency or severity of red tides caused by K. brevis. Florida red tides develop 10-40 miles offshore, away from manmade nutrient sources. Red tides occurred in Florida long before human settlement, and severe red tides were observed in the mid-1900s before the state’s coastlines were heavily developed. However, once red tides are transported inshore, they are capable of using manmade nutrients for their growth.

NOAA reports that red tides off southwest Florida caused mass die-offs of endangered manatees in 1963, 1982, 1996, 2002, and 2003. ?So these episodes seem to be increasing in frequency. Florida’s manatee population is estimated at 4,000 to 5,000 individuals—about half the total world population of the species, according to the IUCN Red List.