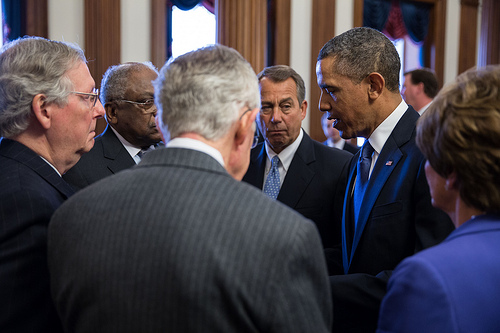 In the past 80 years, only one president, Bill Clinton, has led his party to gain seats in the House of Representatives in the midterm election of his second term. President Obama wants to be the second. And he’s flexing as much political muscle as he can to put the Democrats back in control of the House of Representatives after the 2014 elections so that he can enact his ambitious agenda on gun control, immigration, and climate change.

According to the Washington Post, Obama’s mission to win back the majority for House Democrats began on the very night he was reelected, early last November. After delivering his victory speech, in which he spoke of “the painstaking work of building consensus and making the difficult compromises needed to move this country forward,” Obama called up House Minority Leader Nancy Pelosi (D-Calif.) and Rep. Steve Israel (D-N.Y.), the chair of the Democratic Congressional Campaign Committee (DCCC), and told them of his plans to help win back the House in 2014. “The president understands that to get anything done, he needs a Democratic majority in the House of Representatives,” Israel told the Post. “To have a legacy in 2016, he will need a House majority in 2014, and that work has to start now.”

The Democrats need to win 17 House seats in 2014 to win back the majority. To achieve that, Obama plans to raise big money—he’ll attend eight DCCC fundraisers this year, as opposed to the two attended in 2009 in the run-up to the 2010 midterm elections. Obama’s former campaign infrastructure, now flying under the banner of Organizing for Action and operating as a nonprofit, will also join the 2014 fight. Israel, the DCCC chairman, has met with Jim Messina, the head of OFA who also ran Obama’s reelection campaign, to discuss 2014 plans.

Here’s more from the Post on Obama’s overtly political approach to enacting his second-term agenda:

In some ways, Obama is flipping the traditional script for ­second-term presidents.

Most have about two years to secure a domestic agenda before lame-duck status sets in. But Obama is laying out an argument for a new Congress that, if successful, could give him his last two years in office to cement his legacy.

The GOP resistance to his agenda is helping give Obama the political framework for the midterm congressional campaign—if not short-term legislative victories.

“I think six months from now, if Republican recalcitrance continues, it will become by definition a 2014 strategy,” said Chris Kofinis, a Democratic strategist. “At some point over the next three to six months, when most of these issues will get resolved or they won’t, then the Republicans will face a 2014 problem.”

Some Obama allies say the president views OFA as a way of marshaling—and extending beyond the traditional two years of a second term—his political power. The organization went largely dormant after his 2008 victory, mobilized only during late-inning pushes to secure health-care and Wall Street legislation.

Obama, though, has a mountain to climb to reach the 65 percent approval rating enjoyed by Clinton in the run-up to the 1998 midterm elections. Gallup pegs Obama’s approval rating at 51 percent. And it’s only going to get harder for the president, with more dysfunction, brinksmanship, and acrimony between him and House Republicans as we hurtle toward Election Day 2014. Of course GOPers recognize that, the moment Obama secured his own political future, he began plotting their defeat. But, practically, that means any chance of a “grand bargain” or a compromise on a big piece of legislation is fading fast.

The 2014 elections are well underway. We’re in for 20 ugly months of partisan warfare here in Washington.