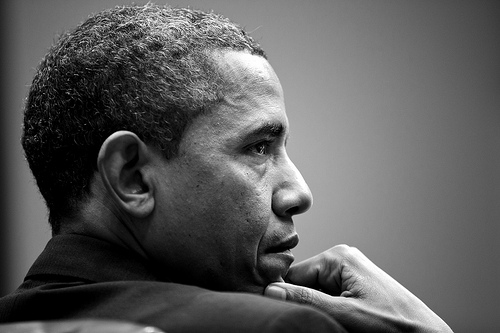 Organizing for Action, the pro-Obama nonprofit hoping to raise $50 million to mobilize Democratic supporters around the president’s agenda, kicked off its “Founder’s Summit” on Tuesday morning at the tony St. Regis Hotel near the White House. But as ex-Obama aides David Plouffe, Jim Messina, and others spoke of the need for volunteers and donors outside Washington to pressure Congress into action on gun control, immigration, and climate change, OFA itself is still dogged by reports that big donors to the group will gain special access to the president.

At the OFA summit, spokeswoman Katie Hogan said little to satisfy the group’s critics. Hogan stressed that OFA’s fundraising plans were still in flux, and she couldn’t say definitively what the group’s interactions with the Obama administration would look like or how the organization would evolve going forward. “I don’t have a crystal ball,” she told reporters before event began.

She did say that OFA’s board meetings will be closed to the public or press. The group’s main board of directors will reportedly include ex-Obama officials such as Messina, Plouffe, and former deputy campaign director Stephanie Cutter. However, it is OFA’s “advisory board” that has drawn much of the criticism. That board, according to the New York Times, will consist of supporters who’ve donated or raised $500,000 or more, and who will receive quarterly meetings with the president.

Both the White House and Jim Messina have dismissed the notion that OFA is selling access, but neither have refuted the Times story. Reformers have blasted OFA for appearing to sell access to the president, and some have called on Obama to demand that OFA be shut down.

On Wednesday evening, Obama is scheduled to speak to the 50 or 60 volunteers, donors, and other supporters who are in DC for the OFA summit. That event will be open only to small pool of reporters assigned to follow the president, and most of the summit is closed to reporters and the public. It’s a safe bet, though, that near the top of the organizers’ agenda is a plan to raise $50 million to back Obama’s second-term agenda. As Bloomberg reported, some big Democratic givers are still worn out from the campaign, when they were pressed to give time and again. OFA’s tallest hurdle going forward may be donor fatigue.

In his own remarks, Plouffe offered an indirect rebuke to OFA’s critics. “Just the notion that there’s millions of Americans that want to be part of these debates that they’ve been closed off to in Washington, that in my mind is reason enough to march forward,” he said. “This is something that should be celebrated, not criticized.”