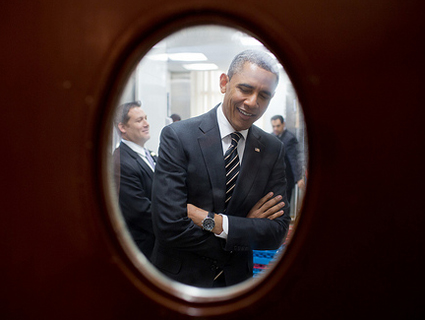 Here’s how the White House described it:

Over 10 years, the Energy Security Trust will provide $2 billion for critical, cutting-edge research focused on developing cost-effective transportation alternatives. The funding will be provided by revenues from federal oil and gas development, and will not add any additional costs to the federal budget. The investments will support research into a range of technologies – things like advanced vehicles that run on electricity, homegrown biofuels, and domestically produced natural gas. It will also help fund a small number of real-world experiments that try different transportation techniques in cities and towns around the country using advanced vehicles at scale.

Obama first called for an Energy Trust Fund in his State of the Union address last month. Under his plan, the $2 billion would come from royalties for federal oil and gas leases. The proposal asks Congress to include this in their 2014 budget.

This is today’s second bit of good news for environmental advocates. The administration is also expected to announce that it is directing all agencies to take emissions into account when approving new projects, which includes highways, pipelines, and drilling plans. The guidance is expected to direct agencies to consider climate when they make assessments under the 1970 National Environmental Policy Act. The law was passed to look at more direct environmental risks, like the potential for oil spills or the destruction of habitat, but the White House Council on Environmental Quality is expected to tell the agencies to look at the potential impact on emissions now, too.

UPDATE: Well, perhaps we should have known this was a little too good to be true for a Friday. The Washington Post is reporting that the Obama administration plans to revise rules on emissions from new power plants it released last year, which would likely delay their implementation.

The discussions center on the first-ever greenhouse gas regulations for power plants, which were proposed by the Environmental Protection Agency nearly a year ago. Rewriting the proposal would significantly delay any action, and might allow the agency to set a separate standard for coal-fired power plants, which are roughly twice as polluting as those fueled by natural gas.

While the move could bolster the administration’s legal justification for regulating power plants’ carbon emissions, any retreat on the rules would be a blow to environmental groups and their supporters, who constituted a crucial voting block for President Obama and other Democrats in last year’s elections.