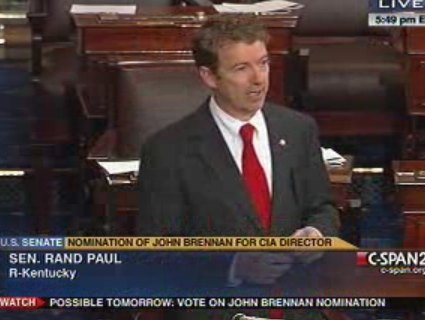 UPDATE: Senator Paul ended his filibuster after midnight on Thursday after nearly 13 hours. As Paul ended his filibuster, he said “I would go for another 12 hours to try to break Strom Thurmond’s record, but I’ve discovered that there are some limits to filibustering and I’m going to have to go take care of one of those in a few minutes here.” In order to hold the Senate floor, Paul was not permitted to even sit down, let alone leave to go to the bathroom.

On Wednesday, Senator Rand Paul (R-Ky.) engaged in a marathon filibuster of John Brennan, Obama’s nominee to head the CIA, protesting the administration’s policy on the use of drones in lethal operations. Paul began speaking at noon and was still filibustering six hours later.

“I will speak until I can no longer speak,” Paul said. “I will speak as long as it takes, until the alarm is sounded from coast to coast that our Constitution is important, that your rights to trial by jury are precious, that no American should be killed by a drone on American soil without first being charged with a crime, without first being found to be guilty by a court.” Paul also criticized the administration’s rationale for targeting American terror suspects overseas, as laid out in a recently leaked white paper.

Paul has been pressing the Obama administration for weeks to answer if it believes the president has the authority to order a drone strike on American soil. On Tuesday, Paul received a letter from Attorney General Eric Holder stating that, in certain “extraordinary circumstances,” such as the attack on Pearl Harbor or the 9/11 attacks, military force could be used domestically. Sens. Mike Lee (R-Utah), Ted Cruz (R-Texas), Jon Cornyn (R-Texas), Marco Rubio (R-Fla.), Pat Toomey (R-Pa.), Jerry Moran (R-Kan.), Saxby Chambliss (R-Ga.), and Ron Wyden (D-Ore.) joined Paul’s filibuster, although Wyden reiterated his intention to vote for Brennan’s confirmation. The administration recently agreed to allow senators on the intelligence committee access to the legal memos justifying the use of lethal force against American terror suspects.

“That Americans could be killed in a café in San Francisco, or in a restaurant in Houston, or at their home in Bowling Green, Kentucky, is an abomination,” Paul said. “It is something that should not and can not be tolerated in our country…Has America the beautiful become Alice’s Wonderland?” Paul also criticized the use of signature strikes—lethal operations targeted at anonymous individuals abroad who are believed to be terrorists based on a “pattern of behavior.”

During a Senate judiciary committee hearing held earlier Wednesday, Sen. Ted Cruz (R-Texas) asked Holder whether he believed that it would be constitutional for the president to order a drone strike on an American citizen suspected of terrorism in the United States who was “sitting quietly at a café.” After a lengthy back and forth, during which Holder said that he did not think it would be “appropriate” to use lethal force in such a circumstance, and Cruz pressed him on whether that meant “unconstitutional,” Holder acknowledged that he did not think it would be constitutional. “Translate my ‘appropriate’ to ‘no,'” Holder said. “No.” Holder said he didn’t believe the letter he had sent to Paul was inconsistent with that answer.

Later on during the oversight hearing, Sen. Lindsey Graham (R-S.C.) asked Holder if it would be constitutional for the US military to fire on a hijacked civilian plane that was aimed at the White House. Holder said yes. “When we say Congress gave every administration the authorization to use military force against Al Qaeda, we didn’t exempt the homeland, did we?” Graham asked.

“No I don’t think we did,” Holder said. “In the letter that I sent to Sen. Paul, that’s one of the reasons I mentioned September the 11th,” Holder said, referring to an order given by then-Vice President Dick Cheney to shoot down passenger planes that were reportedly headed for the Capitol. The order was never carried out because it was received too late.

“What I worry about are the people who say America is a battlefield,” Paul said during his filibuster. “They’re saying they want the laws of war to apply here.”