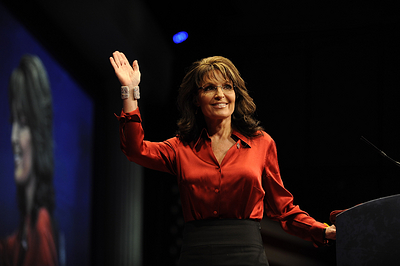 Sarah Palin rocked a packed ballroom here at the annual Conservative Political Action Conference (CPAC) on Saturday afternoon. The applause was roaring. The hollers many. The atmosphere crackling. In other words: Dog bites man.

Palin’s speech, if you can call it that, was Palin at her most Palinesque: heavy on one-liners and folksy charm; light on, you know, anything resembling substance and solutions. Here, a sampling of Palin’s many zingers:

“They talk about rebuilding the GOP? How about restoring the trust of the people?”

“Let’s be clear about one thing: We’re not here to rebrand a party. We’re here to rebuild a country.”

“Barack Obama promised the most transparent administration ever. Barack Obama, you lie!”

“Mr. President, we admit it: You won! Now accept it and step away from the teleprompter and do your job.”

“[Obama] is considered a good politician—which is like saying Bernie Madoff was a good salesman.”

“We’re not here to put a fresh coat of rhetorical paint on our party.”

“If you don’t have a lobbyist in DC, you are not at the table, you are on the menu.”

“Never before have our challenges been so big, and our leaders so small.”

Imagine that for 30-plus minutes and you get the idea. I hesitate to call the above quotes “punchlines.” Punchlines follow a wind-up of some kind, an anecdote or an argument. Palin’s speech didn’t have any of these. The one-liners were the speech.

The closest she came to making a point about the future direction of the fractured Republican Party was to say that “it’s time to stop preaching to the choir,” a piece of advice offered, as Jon Ward sagely tweeted, to the choir. The closest she came to tackling an issue of importance was to note that the median household income has declined by thousands of dollars since 2007 “even as we work longer and longer hours.”

That’s right! Also: Data! Economics! Here at Mother Jones, we, too, are concerned about this phenomenon of working longer while earning less. We call it “the Great Speedup.” So go on, Sarah, tell us what we should do about the Great Speedup!

Instead, a few moments later, she told a joke having something to do with her “rack.” Then she did this:

Yes, that’s a Big Gulp. Palin was making a jab at New York City Mayor Mike Bloomberg’s proposed ban on big sugary sodas, which was struck down in court this week. “Bloomberg’s not around,” Palin said. “Don’t worry.” And the crowd went wild.