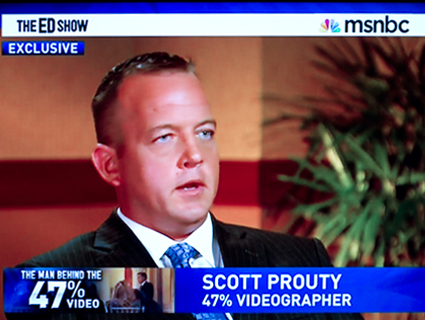 Scott Prouty, the onetime bartender who made the video of Mitt Romney’s 47 percent remarks, has launched a fund to raise money to cover legal costs and possibly the cost of going to law school. After revealing himself on MSNBC’s The Ed Show on Wednesday night, Prouty immediately became a subject of intense media attention. He was besieged with interview requests. And while his hourlong interview with Schultz was under way, he says, strangers showed up at his Florida home and he soon became a target for hate-tweets and dirt-digging from right-wingers still angry about his role in exposing Romney’s dismissive attitude toward half the country.

As this furor was happening—and supporters and fans of Prouty were asking how they could help him—Prouty set up an online “47 Percent Legal Assistance Fund.” (And he assumed control of the @scottprouty Twitter handle that a supporter created for him on Wednesday evening. He had previously been tweeting as @AnneOnymous670.)

After taping an interview with MSNBC’s Lawrence O’Donnell on Thursday night, Prouty discussed with me his reasons for establishing this fund:

After going public, I’ve received a flood of physical and legal threats in emails and tweets. People have found my address and have shown up at my door. It’s possible I may have to move. And I’ve had to contact several lawyers and have incurred legal expenses. I might incur more going forward. I always knew that if I talked about this, I could become a target, and I don’t want to be melodramatic, but some of the threats I’ve received do cause me to be concerned for my safety and that of my loved ones.

I appreciate all the support I’ve received from the beginning—and especially now. Many people have asked how they could help. This is one way. I’ve also said in interviews that if they would like to show their support they can send donations to the SPCA and the Institute for Global Labour and Human Rights. These are both groups that I care about.

I’m hoping that I don’t need to spend a lot of money on lawyers and security. If people are generous and there are any funds left over after these costs are covered, I would use the remaining money to pay for going back to school. I’ve been bartending for eight years and I’d like to move forward with a job that lets me help others. If I end up not using these funds for education, I will donate them to the SPCA and IGLHR.

During his media interviews the past two days, Prouty has not mentioned this fund, and so far only a handful of persons have located the website and contributed.

On the site, Prouty notes, “It’s always been my dream to attend law school. I’d like to be a socially responsible lawyer who can help the 47 percent navigate our legal system. Thank you for your donations!”