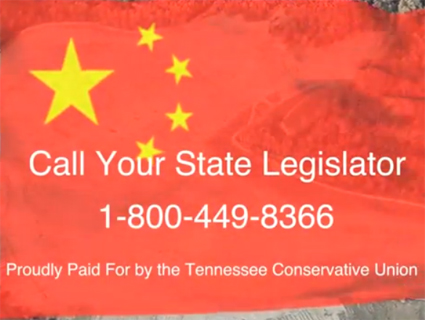 What’s it take to get conservatives in Tennessee fired up about blowing up mountains? China, apparently.

On Tuesday, the Tennessee Conservative Union, which bills itself as the state’s “largest and oldest conservative group,” started running anti-mountaintop removal coal mining ads on television throughout the state. Their complaint? The Chinese company Guizhou Guochuang Energy Holding Group announced last year that it is acquiring Triple H Coal Mining, which does mountaintop removal. The Tennessee Conservative Union ad warns that they will become “the first state in our great nation to permit the red Chinese to destroy our mountains and take our coal.”

“We’re proud that Tennessee is a red state,” the ad concludes. “But just how red are we willing to go?”

The ad comes off as anti-China, but it also offers a critique of mountaintop removal coal mining in general, which is the big news here. The ad comes just a day before committees in both the state Senate and House are expected to vote on the Scenic Vistas Protection Act, a bill activists have been trying to get passed in the state for six years. The measure would make it illegal to blow up mountaintops to mine coal. Supporters are taking TCU’s support for the bill as a sign that it might gain more traction this year.

“The Tennessee Conservative Union is 100% pro-Coal, but our organization does not support destroying our mountain heritage,” TCU Chairman Lloyd Daugherty said in a statement Tuesday. “Mountaintop removal mining kills jobs because it takes fewer workers to blow up a mountain.”

JW Randolph, Tennessee director of Appalachian Voices, a group that has been working to pass the anti-mountaintop removal law, welcomed the ad. “We don’t care if you’re from Bristol or Beijing, blowing up the oldest mountains in America for a few tons of coal is a bad idea,” he said.