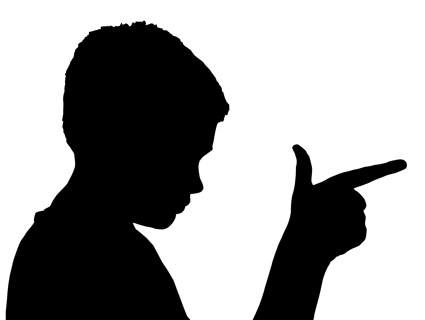 In the wake of the Newtown massacre and the NRA’s call for putting armed guards in America’s schools, some school officials have reacted severely to young kids’ play around the subject of guns. Recent cases have included the suspension of students as young as five years old simply for talking about playing with toy weapons. The offenders’ arsenal has included breakfast pastries, Legos, and Hello Kitty.

“Parents have to be aware that talking about guns or using your fingers to point like a gun is no longer tolerable or prudent,” American Association of School Administrators executive director Don Domenech told USA Today this week. “Everybody has to adjust. Children are being brutalized and murdered in their classrooms. It’s a new world.” But child psychologists have pushed back, explaining that such attitudes fail to consider the developmental stages of young students and their lack of intent to do harm; the American Academy of Pediatrics recently called zero-tolerance suspension policies “drastic.”

We’ve seen this picture before. In the wake of the Columbine High School massacre in 1999, young students were suspended for such trivial offenses as using their hands as imaginary guns, carrying a toenail clipper, and threatening to launch a wad of paper at a classmate with a rubber band. The policies were an outgrowth of the Safe and Drug-Free School Act of 1994, which denied schools federal aid if they failed to expel students who brought guns to campus. Still in effect at elementary and secondary schools today, the policies have set off a new round of harsh responses. Here are six of them:

Plastic toy gun at a South Carolina kindergarten: After bringing a toy gun made of clear plastic to school in January, six-year-old Naomi McKinney was expelled under her school’s zero-tolerance policy. A district official followed up with a letter to McKinney’s parents warning that she’d be “subject to the criminal charge of trespassing” if she returned. “She cannot even be in my vehicle when I go to pick up my other children,” her mom told a local paper. McKinney’s now in a home-schooling program typically only available to students with specific medical needs.

Breakfast pastry “gun” at a Maryland elementary school: Second-grader Josh Welch made national headlines this week after he was suspended for two days for inadvertently munching a school-provided breakfast pastry into the shape of a gun. “I just kept on biting it and biting it and tore off the top of it, and it kind of looked like a gun,” the seven-year-old Welch told his local Fox affiliate. “But it wasn’t. All I was trying to do was shape it into a mountain.” An assistant principal further accused him of pointing the half-eaten strawberry tart at a classmate, although Welch maintained that he only aimed it toward the ceiling.

Finger gun at a Virginia grade school: After a classmate shot him with an imaginary bow and arrow in February, an eight-year-old second-grader fired back by shaping his hand into a gun. He was suspended for “threatening harm to self or others,” an offense treated on par with bringing a real weapon to school. After a lawyer contested the suspension, the incident was removed from the student’s records. (The bow-and-arrow shooter apparently got in no trouble.) In a similar incident, school officials at White Marsh Elementary in Maryland suspended two first-graders, both six years old, for what one of their parents called a “childish game of cops and robbers” at recess in January.

Paper pistol at a Philadelphia elementary school: In January, the grandfather of fifth-grader Melody Valentin gave her a piece of paper he’d crudely folded into the shape of a handgun. Valentin reportedly brought it to school by accident and ditched it in a trash can, at which point a classmate ratted her out to school officials. She was searched and an administrator scolded her in front of her class, bringing her to tears. Valentin told Fox 29 that her classmates started calling her a “murderer” after the incident.

Lego gun at a Massachusetts elementary school: At an after-school daycare program in January, five-year-old Joe Cruz built Legos into the shape of a gun, which he pointed at other students. In response, school officials threatened him with a two-week suspension if he didn’t shape up. A school attorney cited Cruz’s “consistently disrespectful” behavior, including an incident in which he pretended his finger was a gun. In a statement, the school district said it couldn’t afford to “dismiss or overlook” any such incident in the wake of Newtown. An attorney representing Cruz claimed that the district had no documented evidence of prior misbehavior.

Hello Kitty bubble gun at a Pennsylvania kindergarten: Five-year-old Madison Guarna was suspended for 10 days and forced to undergo a psychiatric evaluation in January after making a “terroristic threat,” telling a classmate that she would shoot her with a toy Hello Kitty gun that fires soap bubbles (not to be confused with the Hello Kitty AR-15), which she had not brought to school. Guarna’s suspension was later reduced to two days. 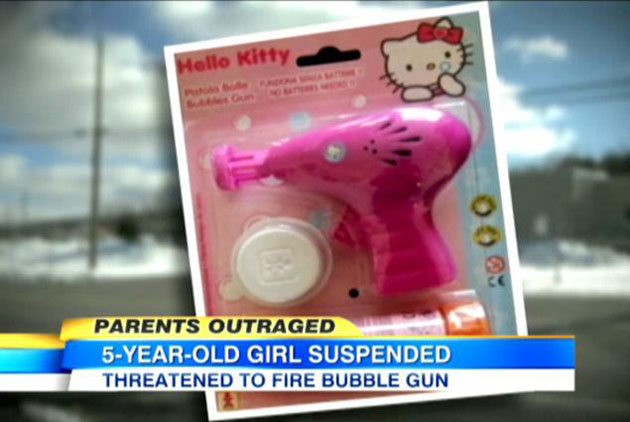