Since mid-March, when former Secretary of State Hillary Clinton endorsed marriage equality in a YouTube video, 11 Democratic senators have formalized their “evolution” on the issue in a series of interviews, statements, Facebook posts, and Tumblr entries. Only three Democratic senators—Joe Manchin of West Virginia, Mark Pryor of Arkansas, and Mary Landrieu of Louisiana—have yet to officially come out in support of gay marriage.

While the Senate holdouts hail from states that voted for Mitt Romney last fall, their 18 counterparts in the House come mostly from districts that President Obama won in 2012—in some cases overwhelmingly—even though the majority hail from red states. Reps. Cedric Richmond (D-La.), Terri Sewell (D-Ala.), David Scott (D-Ga.), and Bennie Thompson (D-Miss.) all represent heavily black districts in the Deep South that Obama won by 30 points or more.

Richmond is a particularly interesting case. Although he told the Hill’s Cameron Joseph that he is a “proponent of equal rights,” he did not explicitly endorse marriage equality. Meanwhile, his New Orleans district, where 76 percent of voters cast for Obama, includes one of the largest gay communities in the South and is home to the annual LGBT “Southern Decadence” festival. In a statement provided to Mother Jones, Richmond said he supported equal rights, but did not respond specifically to the question of marriage:

I am a firm proponent of equal rights and support efforts to end prejudice against all human beings. A person’s decision concerning who they commit their life to should be respected regardless of gender, race, or sexual preference. Our collective goal as Americans should be to strive to treat all people with decency and fairness.

Here’s the breakdown of the Democratic holdouts, and how Obama fared in their districts last fall. 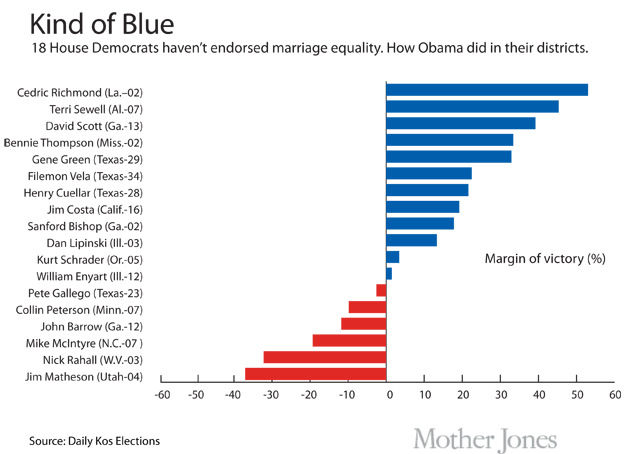 Correction: Costa formally endorsed marriage equality on April 18, before this story was published.