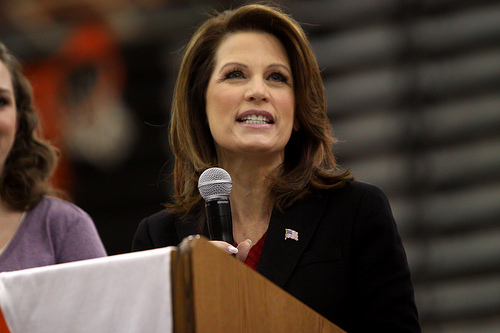 CREDO Super-PAC, the group that spent nearly $3 million to oust five conservative congressmen in 2012, has announced its first target of the 2014 midterms: Tea party firebrand Rep. Michele Bachmann (R-Minn.). The super-PAC says it will spend at least $500,000 to boot Bachmann out of office.

CREDO Super-PAC, an offshoot of the progressive phone company CREDO Mobile*, knows Bachmann all too well. In 2012, the super-PAC named Bachmann one of the “Tea Party Ten” lawmakers that it set out to defeat. But Bachmann’s opponent, Democrat Jim Graves, and the outside groups hoping to oust her fell just short: She won by a few thousand votes. When I interviewed Becky Bond, the politically geeky president of CREDO Super-PAC, after the elections, she told me her biggest regret was the Bachmann race. “If we could do it again, we would’ve taken her on earlier and she would’ve lost,” Bond said.

That explains why CREDO Super-PAC is launching its anti-Bachmann campaign 18 months before the 2014 elections. In its announcement, CREDO says it will use the same data-driven, grassroots-centric strategy to oust Bachmann as it did in 2012. As I’ve written before, CREDO is something of an outlier on the super-PAC landscape: While most super-PACs poured millions of dollars into TV, radio, and Internet ads, in many cases to little effect, CREDO opened field offices in ten congressional districts, hired organizers, signed up volunteers, and used political data to inform their work.

Here’s what CREDO said in its Bachmann announcement:

“What kind of a signal does it send that not only is Rep. Michele Bachmann in Congress, but she’s on the House Intelligence Committee?” asked Becky Bond, president of CREDO Super-PAC. “Bachmann’s bigotry and bizarre political views don’t represent Minnesota values. Bachmann has launched an anti-Muslim witch hunt, actually believes that gay marriage is the biggest problem facing the nation, and has even claimed that Obamacare kills people.

“Bachmann won by a mere 4,000 votes in 2012, and is beatable in 2014. If our volunteers in Minnesota’s 6th district can turn out enough voters, the Tea Party Caucus in Congress will be down yet one more bigoted conspiracy theorist.”

Aside from being a climate denier and promoting hate and bigotry, Rep. Bachmann has been making headlines lately for being embroiled in multiple campaign scandals. Rep. Bachmann is currently under investigation by the Federal Election Commission, the Office of Congressional Ethics and the Iowa Senate Ethics Committee for allegedly authorizing improper campaign payments, among a host of other potentially illegal activities.

Instead of spending millions on expensive TV advertising, CREDO Super-PAC will employ a proven campaign model that helped defeat some of the most extreme Tea Party Republicans in 2012, including former Reps. Chip Cravaack and Allen West. CREDO Super PAC will open an office in Minnesota’s 6th congressional district, hire on the ground organizers, and begin mobilizing volunteers to get out the vote against Bachmann. CREDO Super PAC will use cutting-edge research to target a specific universe of voters in MN-06 to help make the difference on Election Day.

Right now, Bachmann is in a tight spot. A former aide, Peter Waldron, alleged that Bachmann’s presidential campaign made secret payments to an Iowa state senator in violation of Iowa ethics rules. And Bachmann’s former chief of staff, Andy Parrish, said in an affidavit that Bachmann “knew and approved of” those payments to the state senator, Kent Sorenson. Sorenson has denied the allegations, calling them “totally baseless, without evidence, and a waste of Iowans’ time and money.” An attorney for Bachmann says the congresswoman “followed all applicable laws and ethical rules and instructed those working for her to do the same.”

*Disclosure: Mother Jones is among the dozens of nonprofits which have received funding from CREDO Mobile through its customer-selected action program.