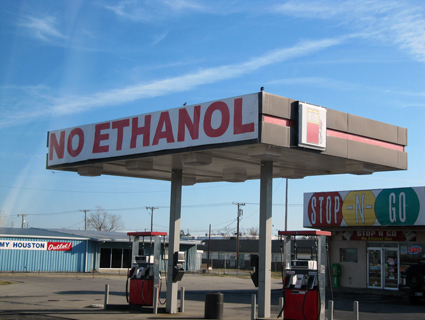 Bill Pracht has bad memories of last summer. “The drought was so bad here that the corn was just decimated,” he recalls of the farm country around Garnett, Kan., where he oversees East Kansas Agri-Energy, an ethanol plant. “Many fields were zero.”

In August, corn prices hit their highest level ever, driven mainly by the severe drought that crippled America’s corn belt. By October, Pracht could see that he was spending more on corn than he could make with ethanol, and with no relief in sight, he began to have doubts about keeping the plant open.

“We knew we’d be wasting money,” he says.

So, he pulled the plug, shuttering the plant and laying off twenty employees until conditions improve enough to make churning out what was until recently one of the nation’s fastest-growing fuel sources profitable again. And as the EPA nears a final decision on new regulations that would require oil companies to use more ethanol in their gasoline mixes, Pracht’s story illustrates a risk of increasing reliance on corn-based fuels in a warming world.

Pracht isn’t alone: Over the last year, nearly 10 percent of the nation’s ethanol plants have shut down. Annual corn yields came in almost a third lower than projected, according to the USDA, driving record-high corn prices that are likely to continue to rise into 2013, up to 19 percent higher than 2011-2012 averages. Overall, 2012 was the first year since 1996 (another drought year) in which total ethanol production decreased (by 4.5 percent), reversing a trend of exponential growth that’s lasted almost a decade, according to the federal Energy Information Administration: 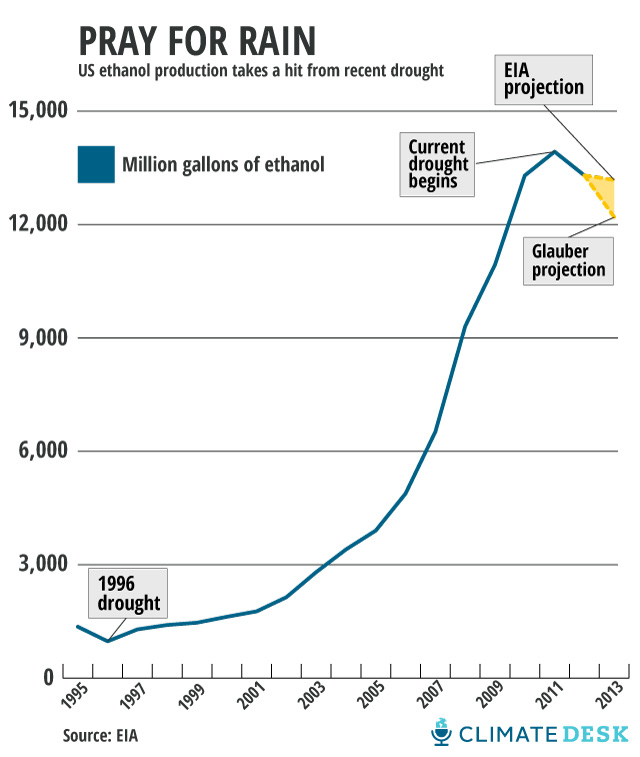 In February, USDA Chief Economist Joseph Glauber blamed drought for “one of the most unfavorable growing seasons in decades” in testimony before the Senate’s Committee on Agriculture, Nutrition, and Forestry in February.

But despite the pain of 2012 and some grim predictions from NOAA about the months ahead (drought could lift in the eastern reaches of the Corn Belt and Pracht’s region of Kansas, but worsen elsewhere in the state and to the west), a report on Thursday from the USDA predicts that corn growers will plow into the coming season with gusto: 97.3 million acres of corn are expected to be planted in 2013, up six percent since before the drought and the most acreage since 1936. 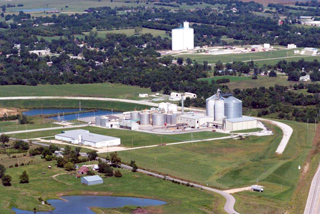 That should be a sign of hope for the ethanol industry, says Joseph Glauber, the USDA’s chief economist; if weather conditions improve and the whole crop comes in, corn prices could drop a third by year’s end. But he cautions that ethanol ain’t out of the woods yet: If conditions like the first three months of 2013 persist, he says, ethanol production could fall by another eight percent this year.

“As much as anything it’s related to the drought,” he says.

For that reason, last week’s USDA report came as a huge relief to Bob Dinneen, president of the Renewable Fuels Association, which represents the ethanol industry. Dinneen is hopeful the drought improvements NOAA forecasts for Iowa and Minnesota will spread southwest to Nebraska and Kansas, where the forecast is less optimistic.

“In any kind of normal weather year, we’ll have a bin-busting season,” Dinneen says. “You’re always concerned. You don’t want to see another [drought], but this is a time of year when everybody’s optimistic.”

Of course, how the season will pan out is still far from settled. The EIA also projects a further drop in total ethanol production this year of about 0.9 percent, much less severe than Glauber’s prediction but enough to highlight the uncertainty producers face going into the summer, and the vulnerability of the ethanol industry to variable climate conditions.

“All of a sudden, there are much higher corn prices when you have a drought.”

For ethanol, growth is also limited by what’s known as the “blend wall;” because only a relatively small fraction of cars can run well on ethanol-based fuel, ethanol can comprise no more than ten percent of the total fuel supply—a ceiling Dinneen says his group is pushing aggressively to raise. At the same time, President Obama signaled last month a desire to shift away from corn ethanol with heavy investments in advanced, non-corn biofuels—from things like municipal solid waste or woody biomass, sources that could prove more resistant to drought than corn—via his proposed Energy Security Trust.

Still, Glauber says, for the time being ethanol eats up forty percent of US corn, which leaves it vulnerable to bad weather and subsequent shifts in grain supplies: “Ethanol is a huge driver of corn demand. All of a sudden, there are much higher corn prices when you have a drought.”

As long as climate change is a factor, the EIA reports, more and more ethanol producers are adopting oil recovery methods to squeeze more power out of their corn, increasing the chances of staying profitable in a time of unpredictable weather.

For Bill Pracht, those advances can’t come soon enough. He hopes to be able to re-open his plant by September, keeping a skeleton crew on in the meantime so that the plant can spring back into action when the price is right.

“When Mother Nature cooperates,” he says, “we’ll be able to start it up and get back to where we were before.”