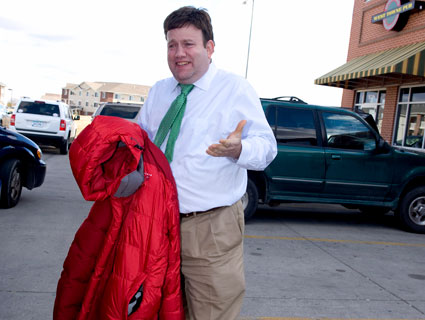 Frank Luntz, the media-friendly Republican consultant and word wiz, told a group of college students this week that Rush Limbaugh and right-wing talk radio are “problematic” for the GOP and partly responsible for the stark polarization within the nation’s political discourse. He only dared to speak so candidly about Limbaugh and other conservative hosts off the record. A secretly recorded video, though, captured Luntz’s remark.

On April 22, Luntz was holding a talk at his alma mater, the University of Pennsylvania, and providing his essential take on political communication: “It’s not what you say that matters. It’s what people hear.” At this event sponsored by College Republicans, Luntz (class of ’84) cracked a joke about Nancy Pelosi and face-lifts and acknowledged his party needs to interact more effectively with a wider swath of Americans: “We can’t talk to 51 percent of America. It just doesn’t work.” And, he emphasized, words matter. (In 2009, Luntz urged GOPers to decry President Barack Obama’s health care reform proposal as a “government takeover” in order to defeat it.) Voters, Luntz told the students, respond more positively when a politician refers to “hardworking taxpayers” than to “the middle class.” He warned that if his party did not resolve its internal divides, it could lose the House of Representatives next year.

At one point, Luntz was asked about political polarization. He replied that he had something important to say on this matter but was apprehensive about speaking openly; doing so, he explained, could land him in trouble. Members of the audience groaned; some called out for Luntz to continue off the record. Luntz asked if anyone was recording the event, and Eric Kaplan, a reporter from the college paper, the Daily Pennsylvanian, indicated that he was. Luntz requested that he turn off his recording device. Kaplan did so and agreed that this part of Luntz’s talk would remain off the record. But one of the students present, Aakash Abbi, a junior majoring in philosophy, politics, and economics, started to record Luntz on his iPhone (without letting Luntz know), and Abbi has provided that recording to Mother Jones.

Believing he was speaking privately to the dozens of students present, Luntz proceeded to gripe about conservative talk radio and its impact on political polarization:

And they get great ratings, and they drive the message, and it’s really problematic. And this is not on the Democratic side. It’s only on the Republican side…[inaudible]. [Democrats have] got every other source of news on their side. And so that is a lot of what’s driving it. If you take—Marco Rubio’s getting his ass kicked. Who’s my Rubio fan here? We talked about it. He’s getting destroyed! By Mark Levin, by Rush Limbaugh, and a few others. He’s trying to find a legitimate, long-term effective solution to immigration that isn’t the traditional Republican approach, and talk radio is killing him. That’s what’s causing this thing underneath. And too many politicians in Washington are playing coy.

As he continued, Luntz, according to Abbi and two other attendees (who wish to remain anonymous), asserted that it had been irresponsible (and bad for the GOP) for right-wing talkers to pontificate about women’s bodies and birth control—an obvious reference to Limbaugh’s attacks last year on Sandra Fluke, a law student invited to testify before Congress on health insurance coverage of contraception. (Abbi didn’t catch this part of Luntz’s reply on his recording.)

Luntz was blaming polarization and the GOP’s problems partly on conservative media, but he didn’t want his criticism of Limbaugh, Levin, and the others to reach beyond this classroom. He was clear on this basic point: Right-wing media is not serving the national debate and not helping the GOP widen the party’s appeal beyond its declining base. (Luntz declined to comment on his remarks at the event.)

Luntz hasn’t been shy about pointing out the Republican Party’s problems. In January, he wrote a Washington Post op-ed contending that Republicans have dug themselves deep into an image hole. (“Just saying ‘no’ to the president has its limits.”) Regarding immigration, he observed, “Hispanic voters don’t think Republicans like, welcome or respect them. So how can they vote Republican? Immigration reform that brings people out of the shadows is the last, best opportunity for the party to reset its broken relationship with Hispanics.”

Luntz did not include Limbaugh and right-wing media in this op-ed critique. And in years past, Luntz has showed respect—even deference—toward Limbaugh. In 2004, he appeared on Fox News and acknowledged that he had conducted a poll pitting John Kerry against Hillary Clinton because Limbaugh had suggested he do so: “In fact, he had talked to me about it a couple times on the air, and I wasn’t paying attention. And he even suggested that if I didn’t do the poll that there might be consequences…Nobody wants to have to respond to 20 million people that they’re listening to on the air.” That certainly didn’t prevent Limbaugh from fiercely attacking Luntz two years ago after the consultant, speaking at a meeting of the Republican Governors Association, said he was “frightened to death” of the the Occupy Wall Street movement and advised GOPers that they should not talk about “capitalism” but “economic freedom.” On the radio, Limbaugh assailed Luntz for trying to “dumb down” the conservative message.

Abbi, the student who recorded Luntz, says he switched on his iPhone video recorder because he was surprised that Luntz asked to go off the record: “His request rang with a sense of disingenuity.” Abbi, who says he came to the lecture because he had previously been impressed by Luntz, explains:

This question came up after almost 40 minutes of Luntz’s inane and obviously pandering presentation. He had already offended multiple audience members with his cavalier flippancy. At one point, he cut off a student who was saying that his family is one of immigrants and loudly asked, “From Chechnya?” Raucous laughter followed from the College Republicans in attendance, but uneasy looks were exchanged by most others. To me, a man whose career is built on being viewed as the “Master of Words” should be willing to always stand by what he says. If he can say it to a hundred-plus Penn students, the rest of America deserves to hear it.

At Penn, Luntz was egged on to disclose his view that Limbaugh and conservative talk radio are harming the GOP’s prospects and the national interest. Yet these are probably the sort of words he would counsel his Republican allies and clients not to use.