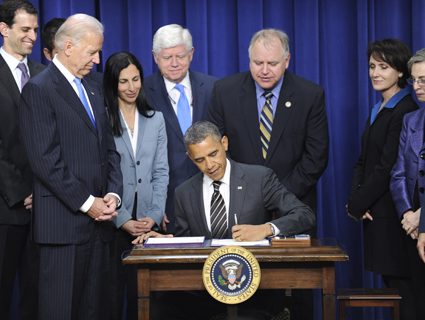 On Thursday, the Government Accountability Office released its much-anticipated report on political intelligence, a booming but mostly anonymous industry that harvests information on congressional and regulatory activities and passes it on to hedge funds. The industry has exploded over the last decade; in 2009, the most recent year for which an estimate is available, the industry was valued at $402 million. And the industry’s growth shows no signs of letting up.

Rep. Louise Slaughter (D-N.Y.) and Sen. Chuck Grassley (R-Iowa) pushed hard to inset an amendment into the STOCK Act (which prohibited insider trading by members of Congress) mandating that people who collect and sell political intelligence, many of whom are former Hill aides themselves, formally register as operatives. That was defeated after an intense lobbying effort from hedge funds, who wanted to preserve their anonymity. Slaughter and Grassley had to settle for a GAO study:

There are none of the bombshell statistics or anecdotes that the GAO is known for, and the report’s one Capitol Hill case study, in which Sen. Bill Frist (R-Tenn.) leaked the contents of a speech that would influence stocks of asbestos manufacturers, produced no evidence of actual wrongdoing. The STOCK Act sat dormant for five years until a 60 Minutes report compelled Congress to act. Reformers, aware of the adage that nothing ever gets fixed in Washington without a scandal, have been waiting for a similar catalyst for political intelligence.

If you’re an open-government advocate, the most disconcerting thing about political intel may just be how normal it’s become. Consider this: While deflecting arguments that its operatives should register, political intel professional also told the GAO auditors that any regulation of their colleagues should apply to that other brand of Capitol Hill gossip-hound—reporters. Per the report: “Other interviewees questioned the need for a media exemption. For example, three political intelligence firms, and one attorney from a law firm said that there should not be an exemption for media organizations because they engage in the same activists as political intelligence firms, and ask the same type of questions about the same issues that their subscribers and clients are interested in.”

That sounds cynical—and it is—but it’s also a reflection of the extent to which Washington media companies are increasing tailoring their services toward an elite clientele. A 2008 internal memo from Politico famously asked its reporters to ask themselves regularly, “Might an investor buy or sell a stock based on this story?”