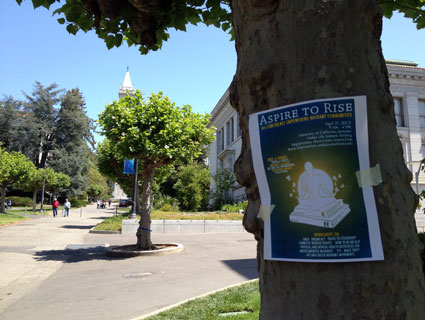 Fernanda Lopez and Jonathan Halvorson started going out after sharing a journalism class as freshmen at San Jose State University. Things were going great—so great, in fact, that Lopez decided to let Halvorson in on her big secret: She’s an undocumented immigrant.

“I never actually said the words, ‘I’m undocumented,'” Lopez said. “I told him I couldn’t get a driver’s license, I couldn’t really get financial aid, I can’t get a job, those kinds of things—and eventually, it was out.”

Lopez’s immigration status didn’t faze Halvorson, a US citizen; two years later, the couple is still going strong. On Saturday, Lopez shared her “coming out” story in a talk titled “Undocumented Love” at the University of California-Berkeley’s sixth-annual Aspire to Rise conference, where some 400 undocumented students, family members, and advocates—some from as far away as Humboldt County, four hours north—gathered to learn about paying for college, negotiating the Obama administration’s deferred-action program, and, yes, dating while undocumented.

As the flagship public university in a state estimated to have the country’s largest DREAM Act-eligible population, UC-Berkeley has been notably supportive of undocumented students. Its chancellor, Robert Birgeneau, has long pushed for equal access to financial aid for DREAMers, and in September, with the help of a $1 million donation from the Evelyn and Walter Haas Jr. Fund, the school started an Undocumented Student Program that connects unauthorized students to a variety of resources, like pro bono lawyers to help them apply for deferred-action (DACA). According to Berkeley Law professor Allison Davenport, of the approximately 200 DREAMers at UC-Berkeley, 105 have gone through the law school’s International and Human Rights Law Clinic to file DACA applications, and another 87 have been placed with attorneys.

With Congress’ immigration reform debate serving as a backdrop, Saturday’s Aspire to Rise workshops were a mix of personal sharing and earnest information dumps. In one classroom, Lopez worked through questions like “Have you ever been accused of trying to marry for papers?”; one room over, her sister, Andrea Pearce, their parents, Jaime and Maria Dolores Lopez, and their Chihuahua-spaniel mix, Fiona, were present for a “Coming Out From Fear” session highlighting the overlapping challenges facing undocumented and LGBT youth.

Maria Dolores, whose nametag read “Loris,” said she has been living in the United States as an unauthorized immigrant for 17 years. Now she’s hoping that immigration reform will help her go back to school to study physical therapy. “Of course, we’re going to have to wait at least one more year to be able to know exactly what we’ll have to do,” she told me in Spanish. “It’s going to take time, but it’s going to happen.”

Of course, not everyone is so optimistic about the legislative process. As people were still filing in and chitchatting over pastries and bagels, UC-Berkeley senior Blanca Zepeda, one of the co-chairs of the student organization running the conference, said that there were still many young undocumented immigrants excluded from DACA—and that quite a few simply didn’t apply for the temporary protection due to the application fee or the fear of turning over personal information to the Department of Homeland Security.

Regarding the Senate Gang of Eight’s immigration bill, the 21-year-old political economy major was glad to finally see legislation but dismayed at what she saw as the government’s preference for certain immigrants: “Depending on how beneficial you are to this country, that’s how fast or how much later you’re going to be able to get either residency, citizenship, or anything like that.” On top of that, Zepeda said, the penalties and fees would prove insurmountable for low-income families, especially with the corrupt immigration consultants known as notarios preying on uninformed immigrants. “For families that have two or more children,” she said, “it’s going to be impossible to get $5,000 or more to be able to apply for everyone at once.”

In other words, even if immigration reform happens this year, there will be plenty of material for next year’s conference—awkward dating moments and all.