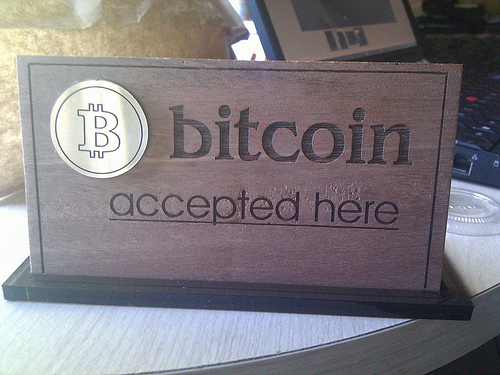 Darryl W. Perry says he’s running for president in 2016 as a libertarian, and he’s pledging to be the first White House hopeful to accept Bitcoin, the online currency currently en vogue in tech and libertarian circles.

Bitcoin appeals to libertarians who are skeptical of the Federal Reserve and other central banking institutions. As Jim Harper, the director of information policy studies at the Cato Institute, recently told Mother Jones, “There are types like me, libertarian gold-buggish folks,” for whom “inflation is a constant worry” and who “see the cryptography in Bitcoin as insulation against inflation.” The US Libertarian Party accepts Bitcoin donations on its website, and the Libertarian Party of Canada joined the Bitcoin bandwagon in March.

Perry laid out his decision to accept Bitcoin in a recent open letter to the Federal Election Commission, the nation’s beleaguered elections watchdog. The Darryl W. Perry for President campaign, he said, will not accept any donations “in currencies recognized by the federal legal tender laws.” The only currencies going into Perry’s campaign war chest are Bitcoin, Litecoin (another online currency), and precious metals. “I am attempting to put into practice a belief that I hold that we should get rid of the Federal Reserve, which is a central bank,” he recently explained. “And unlike some who want to get rid of the Fed, I don’t want the government stepping in to fill the void.”

Believe it or not, refusing to accept actual money may not be Perry’s biggest obstacle to running for president. Unlike the Libertarian Party, Perry disavows the very existence of the FEC and denies its authority to regulate campaigns. Perry says he will not file any paperwork with the commission establishing his presidential campaign, nor will he disclose whom his bitcoin/litecoin/gold contributors are or how he spends their money. He ends his letter by writing, “I intend this to be the last communication I have with this commission as part of my campaign.”

How serious is Perry’s candidacy? His website is, well, far from inspiring, and there’s one brief mention of him on the US Libertarian Party’s website. But he’s nonetheless one of the early Bitcoin adopters in politics, following candidates in North Dakota, Vermont, and New Hampshire who decided to accept the online currency. Provided Bitcoin doesn’t bottom out in the months or years ahead—the price of a Bitcoin is vulnerable to wild swings, evidenced by a 60-percent drop a few weeks ago, quickly shedding $115 in value—I wouldn’t be surprised to see more libertarian types embrace Bitcoin donations.

Therein lies a challenge: Explaining Bitcoin to the average voter is hard enough. If the FEC ever tried to regulate it, well, good luck.