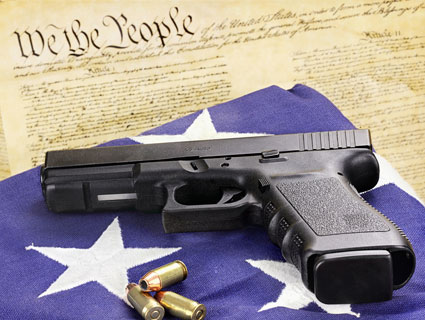 ORIGINAL POST: On Wednesday morning, Sen. Joe Manchin (D-W.Va.) and Pat Toomey (R-Pa.) both publicly conceded that the background check compromise they forged—which would expand scrutiny of gun buyers online and at gun shows, but would also grant many concessions to the gun lobby—won’t receive 60 votes this afternoon to survive a Republican filibuster. But the gun debate isn’t over yet: The background checks bill is just the first of nine amendments proposed for Senate Majority Leader Harry Reid’s gun control package that will get a vote beginning at 4 p.m. ET. Here’s a quick rundown of the others in the order in which they will come up:

Sen. Chuck Grassley’s (R-Iowa) mental health amendment:  Grassley’s Protecting Communities and Preserving the Second Amendment Act of 2013 (PDF), which is cosponsored by five other Republicans, is the conservative alternative to Reid’s gun package. Both include measures on improving background checks, school safety, and gun trafficking prosecutions. But Grassley’s bill would also “place limitations on Fast & Furious type operations,” according to a fact sheet his office put out.

Sens. Patrick Leahy’s (D-Vt.) and Susan Collins’ (R-Maine) gun trafficking amendment: The Leahy-Collins amendment would make gun trafficking a federal felony and strengthen penalties against straw purchasers, including a measure subjecting a gun seller involved in a straw purchase to criminal charges. Convicted gun traffickers would face prison sentences of up to 25 years.

Sen. John Cornyn’s (R-Texas) permit reciprocity amendment: Cornyn’s amendment would allow gun owners with concealed carry permits in their home state to carry their guns in another state and be subject to that state’s concealed carry law, even if they don’t have a permit in that state. As Cornyn explained on the Senate floor Wednesday morning, he considers the proposal analogous to driver’s license laws. New York Democrat Chuck Schumer opposes the bill; he told reporters, “New York City is not Wyoming. You talk to our police in New York state, they think it really interferes with police work.”

Sen. Dianne Feinstein’s (D-Calif.) assault weapons and high-capacity magazines ban: Reid has long promised that Feinstein’s bill to ban assault weapons and magazines holding more than ten rounds of ammunition—which he dropped from the base legislation hoping to improve its chances—would get a vote. Both Reid and Feinstein took to the Senate floor on Wednesday morning citing recent mass shootings as a prime reason to support the bill. But by all counts it has no chance of passing.

Sen. Richard Burr’s (R-N.C.) veterans’ gun rights amendment: Burr’s amendment would allow veterans deemed “mentally defective” on a fiduciary basis by the Department of Veterans Affairs to have the VA’s decision reviewed by a judiciary authority before those veterans are added to the National Instant Criminal Background Check System. A similar measure is in the Manchin-Toomey bill.

Sen. Frank Lautenberg’s (D-N.J.) and Sen. Richard Blumenthal’s (D-Conn.) high-capacity magazine ban: Lautenberg first introduced his bill in 2011 after the Tucson mass shooting, whose fatalities nearly included Arizona congresswoman Gabrielle Giffords. Like Feinstein’s bill, this one would ban magazines holding more than 10 rounds of ammunition. (Feinstein is one of the bill’s cosponsors.) In the House, the bill has the support of Carolyn McCarthy (D-N.Y.), one of the nation’s leading advocates of gun reform.

Sen. John Barrasso’s (R-Wyo.) privacy amendment: On the Senate floor, Barrasso pointed to a New York newspaper that published a Google map of gun owners’ names and addresses, and a Missouri official who resigned after giving confidential information about concealed carry permits to the feds, as examples of why stronger privacy protections are needed for gun owners. His amendment would restrict states’ ability to release gun owners’ names.

Meanwhile, a new ad out this week from States United to Prevent Gun Violence, simulating a workplace attack, makes a dramatic point about the kind of firepower typically used in mass shootings. Watch: