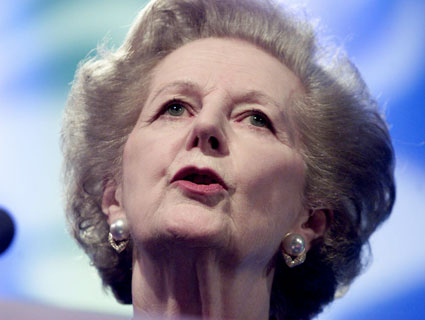 The canonization of Margaret Thatcher began with nanoseconds of news reports that the former British prime minister and conservative icon had died at the age of 87. On MSNBC, my pal Chuck Todd remarked, “We lionize her over here.” There was insta-commentary about how she saved Britain from economic despair and the rest of the world from the Soviets (with some help from a guy named Ronald Reagan). Excess ruled. Two small examples: Elizabeth Colbert Busch, the Democrat running for Congress in South Carolina (and sister of Stephen Colbert) issued this statement: “When I talk to younger women about their careers, I point to Margaret Thatcher as a role model; she’s a tough consensus builder who cared about everybody and put her country’s fiscal house in order.” Rep. Steve Stockman (R-Texas) proclaimed,

Baroness Thatcher’s record of creating explosive economic growth and a stronger nation by embracing conservative values makes the utter failure of Obama’s stale liberalism starker and more disturbing…She is still hated by leftists who would rather live in equalized misery than allow people to achieve as much as they can work for, leftists who now hold the levers of government in the United States…While many mourn, Baroness Thatcher reminded us “I fight on I fight to win.” The best way to honor Baroness Thatcher is to crush liberalism and sweep it into the dustbin of history. What are you doing this morning to defeat liberal politicians?

Thatcher was no consensus builder; she was divisive. She set out to crush unions, privatize, undercut the social safety net (where she could), and push free-market policies that led to the deregulatory nightmares of the future. (Just watch Billy Elliot—or listen to the Clash.) She joined with Reagan in support of torturers and human rights abusers around the globe, as long as these folks were opposed to the Soviets. She called Nelson Mandela a “terrorist” and would not join the worldwide crusade against the racist apartheid regime of South Africa. (In 2006, Conservative Party leader David Cameron felt obliged to disown Thatcher’s and his party’s previous opposition to Mandela and his African National Congress.) She supported Chilean dictator Augusto Pinochet. Her war in the Falklands struck many as an orchestrated stunt, not an act of necessity—though some have seen that military action as a noble blow against Argentina’s fascist junta (which the Reagan administration was supporting).

Her economic policies were harsh. She pushed the so-called poll tax—a tax to fund local government—that resulted in shifting the tax burden from the well-to-do toward lower-income Brits. This tax provoked riots—literally—and was so unpopular that her successor, John Major, replaced it. And as Bruce Bartlett, an economist who served in the Reagan administration noted two years ago, Thatcher shifted the overall tax burden from top to bottom. She cut the top personal income tax rate from 83 percent to 60 percent, but raised the lowest rate from 25 percent to 30 percent. To pay for her tax cuts, she nearly doubled the value-added tax from 8 percent to 15 percent. (Some American conservative economists howled about this.) As Bartlett put it, “Thatcher’s fiscal accomplishments were much more modest than many of today’s Republicans think.” (Here’s a quick assessment of her overall economic policies.)

A long obit in the Guardian by Michael White cites her “willpower and courage” and maintains that Thatcherism “changed the way Britons viewed politics and economics, as well as the way the country was regarded around the world.” But the article notes certain facts necessary for any balanced appraisal:

Thatcher was a historic figure. But that does not mean she was a great leader. (For a vitriolic assessment of her years in power, read this.) She was not the total conservative that American right-wingers have worshipped for years. She regarded climate change as a serious threat. Her government moved early against HIV/AIDS and outlawed corporal punishment. But in the aftermath of the demise of the Iron Lady, the first woman to become a British prime minister is generally being lauded from the US right and the middle as a hero for her country and the globe. This Thatcher bubble will not last forever.

UPDATE: This article neglected to mention Thatcher’s support for the Khmer Rouge.