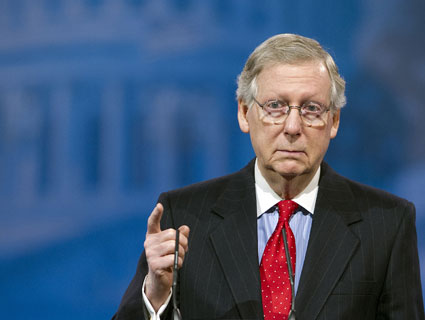 A secret recording of Sen. Mitch McConnell (R-Ky.) and aides discussing in February how they might attack actor/activist Ashley Judd, then a potential 2014 challenger to McConnell, attracted widespread attention after Mother Jones published it Tuesday morning. Much of the news coverage focused on the McConnell team’s comments about Judd’s religious views and her mental-health history. But the tape might raise ethics questions for McConnell and his staff.

Senate ethics rules prohibit Senate employees from participating in political activities while on government time. But the tape indicates that several of McConnell’s legislative aides, whose salaries are paid by the taxpayer, were involved with producing the oppo research on Judd that was discussed at the February 2 meeting. Here’s the relevant section of the transcript:

Presenter: So I’ll just preface my comments that this reflects the work of a lot of folks: Josh, Jesse, Phil Maxson, a lot of LAs, thank them three times*, so this is a compilation of work, all the way through. The first person we’ll focus on, Ashley Judd—basically I refer to her as sort of the oppo research situation where there’s a haystack of needles, just because truly, there’s such a wealth of material. [Laughter.]

The presenter was explaining that the opposition research on Judd was compiled by several people. “LAs” is congressional parlance for legislative assistants; one of the legislative assistants, Phil Maxson, gets his own shout-out. The question is whether Maxson and the other McConnell LAs were digging up material on Judd while on government time. If they were engaged in this research while on annual leave or vacation—or working outside Senate hours—they wouldn’t be violating Senate rules. But if this was done on Senate time, McConnell could have a problem.

[UPDATE: The Weekly Standard‘s Daniel Halper suggests that the aide in the transcription isn’t saying “thank them three times,” he’s saying “in their free time.” That’s plausible, and if it’s true, McConnell and his aides are in the clear. You can listen for yourself here. UPDATE 2: On even closer listen, “in their” isn’t plausible, but “free time” is. You should decide for yourself.]

Here’s how Tara Malloy, an expert on ethics rules at the Campaign Legal Center, described the issue in an email:

Any assessment under the Ethics rules would require some more facts—most particularly whether any official resources were used in connection to the conversation or oppo research, and/or whether the conversation or other activities took place on government property. In general, however, the ethics rules do not bar staffers from engaging in campaign activity provided they do it on their own time and do not involve government resources or property.

Here is the relevant excerpt from the Senate Ethics Manual:

As discussed more fully below, Senate Rule 41 prohibits Senate staff, with the exception of specified “political fund designees,” from handling federal campaign funds. Subject to that restriction, however, and as long as they do not neglect their official duties, Senate employees are free to engage in campaign activities on their own time, as volunteers or for pay, provided they do not do so in congressional offices or otherwise use official resources.  An employee’s “own time” includes time beyond regular working hours, any accrued annual leave, or non-government hours of a part-time employee. Staff may not be required to do political work as a condition of Senate employment. Just as Senate employees are free to campaign for their employing Members on their own time, they may also use their free time or, with the permission of their employing Members, reduce their Senate hours (with a commensurate reduction in pay) to campaign for presidential candidates, other federal candidates, or state or local aspirants. With respect to the question of leave time to perform campaign activities, it is the Committee’s understanding that the Senate does not recognize a “leave of absence.”

We asked Jesse Benton, McConnell’s campaign manager; Allison Moore, a spokeswoman for his Senate office; and Phil Maxson, the LA named on the tape, to explain whether the oppo work was done on Senate time, but they did not respond.

Guy Cecil, the executive director of the Democratic Senatorial Campaign Committee, which is working to defeat McConnell, sent out a series of tweets on Tuesday noting this issue:

@zekejmiller Neither does using official Senate staff to do opposition research on potential opponents.

How many McConnell Senate staffers participated in gathering opposition research on Democrats? Was this part of their day-to-work?

Did McConnell know that his legislative assistants were engaging in negative political research? Did the NRSC?

@hotlinejosh @alex_roarty @kasie Does he think it is OK for his Senate Legislative Assistants to do opposition political research?

@rebeccagberg Did they comment on the legislative staff who was doing opposition political research?