For much of its more than 140-year history, the National Rifle Association promoted gun ownership, shooting, and hunting as good, clean, constitutionally-protected fun. That changed in the past four decades as the NRA transformed into a hardline group closely allied with the gun industry and the conservative establishment whose only solution to gun violence is ever more guns. Watch the shift unfold in this collection of ads promoting the organization from the early 20th century to the present.

1920: “Rifle shooting is a mighty fine sport.” This Remington ad in Boys Life declared that the NRA was “a United States Government organization.” It wasn’t, but that gives you a sense of just how tight the gun group and the government once were—before the NRA entered its current state of perpetual freak-out about the feds coming for Americans’ guns. 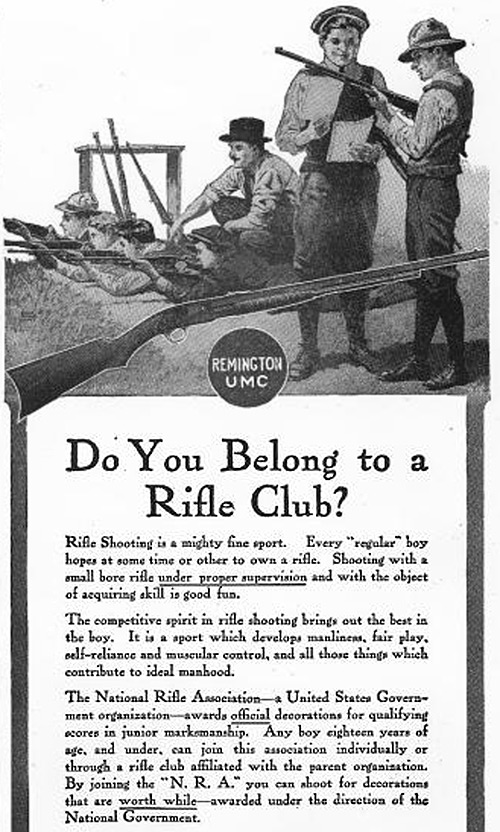 1951: “A 50-Cent Junior Membership” Sure, you might shoot your eye out if you got a Red Ryder air rifle. But you’d also get the chance to join the NRA and win some of its “beautiful, official” marksmanship awards. The NRA-product tie-ins continue to this day: Several gun makers automatically enroll buyers in the organization. 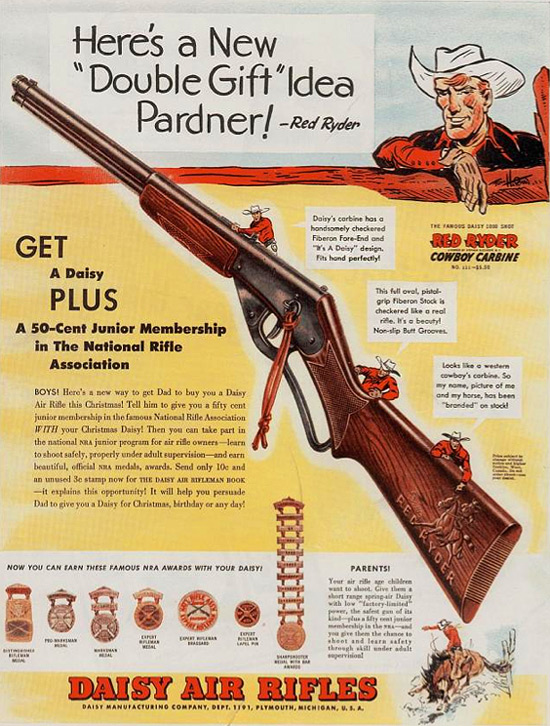 1957: “More fun with your guns!” The NRA described itself as a “great sportsman’s organization” in this ad from Guns magazine. Among the benefits of NRA membership: a “distinctive” lapel pin and the “right to buy government surplus gun equipment.” 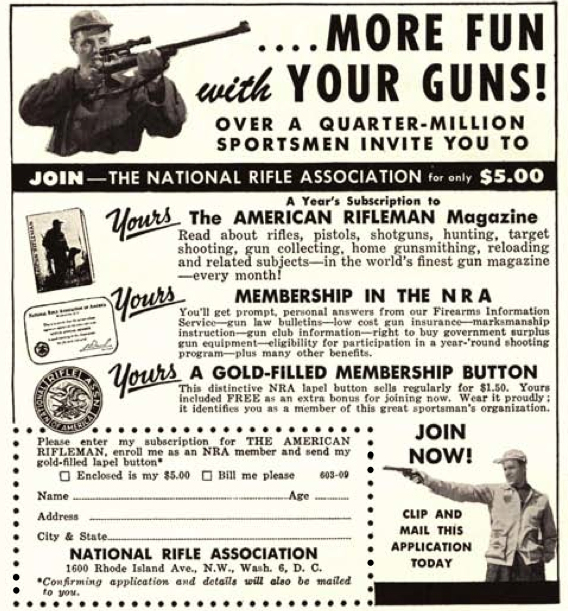 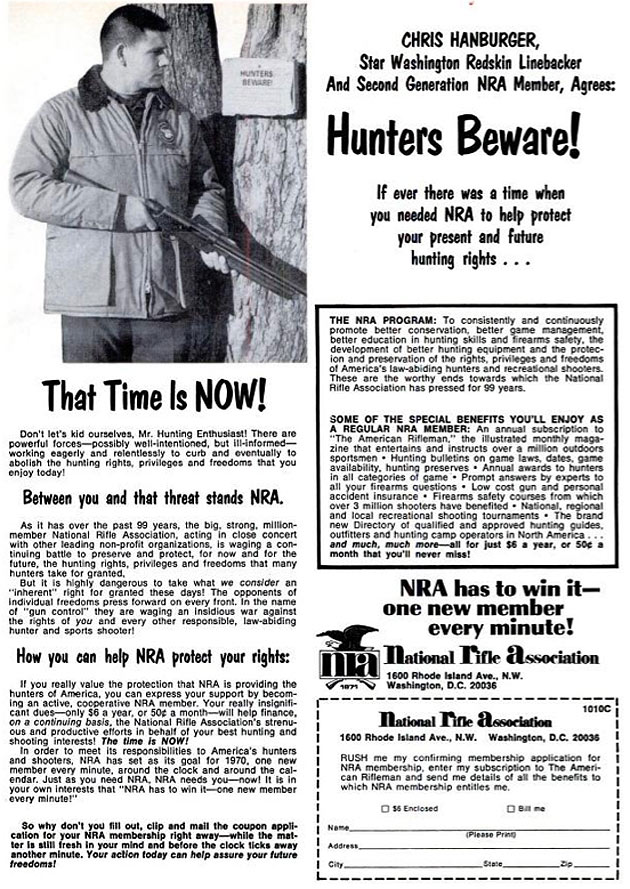 1973: “Only you can save hunting…” The tone is ratcheted up in this ad, which urged hunters to fight those who “want hunting stopped forever” by joining the NRA. “Tomorrow will be too late.” 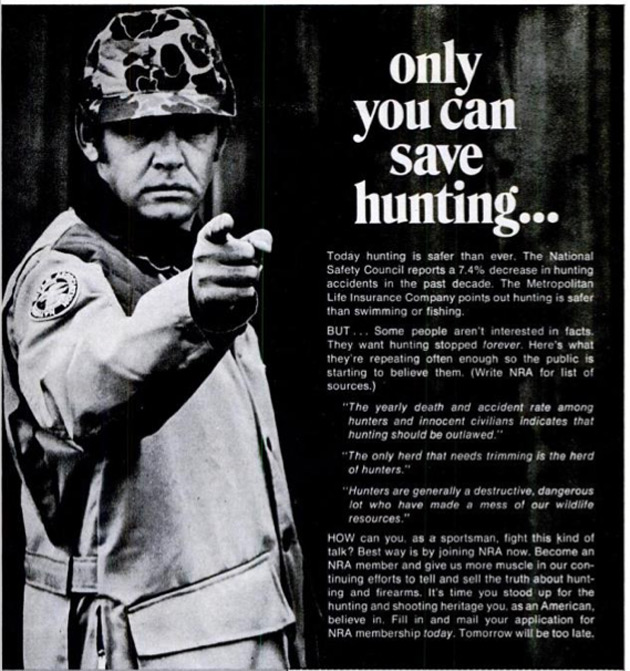 1982: “I’m the NRA” This famous campaign, launched in 1982, was intended to demonstrate the NRA’s broad appeal. Ads included kids (such as eight-year-old BB-gun enthusiast Bryan Hardin), women, African Americans, cops, and clergy. A more recent version of the campaign has featured NRA celebrity board members Tom Selleck and Karl Malone. 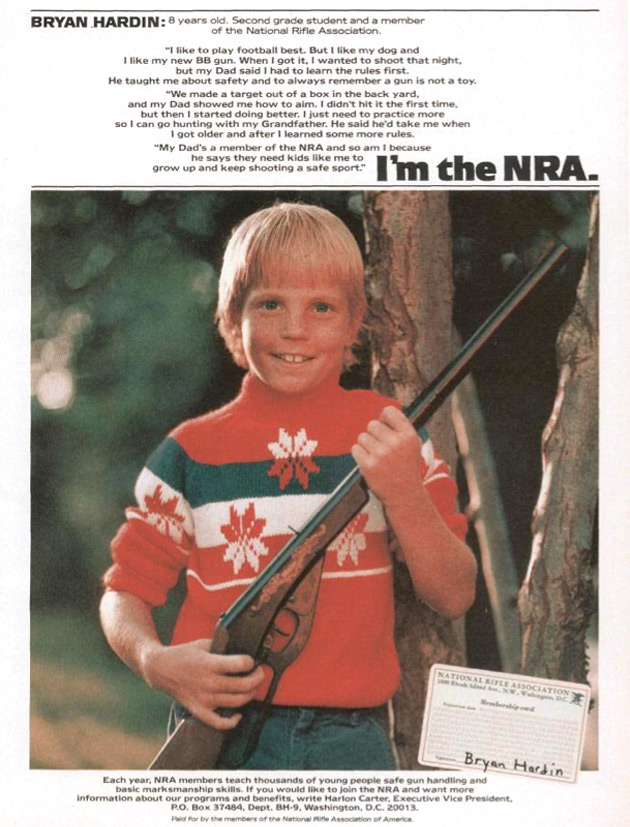 Late 1980s: “Why can’t a policeman be there when you need him?” Fears about violent crime fueled these ads promoting concealed-carry laws. The notion that gun laws are ineffective because criminals break them remains a core NRA argument, as does the idea that armed citizens routinely fend off attackers. 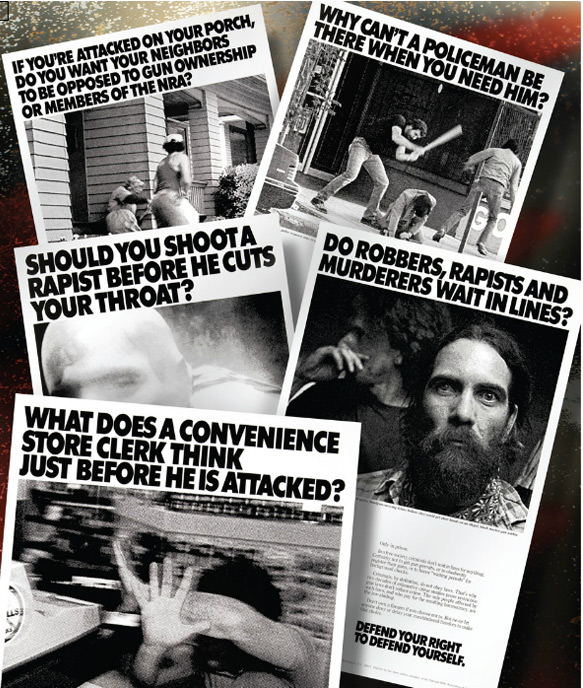 Late 1980s: “This is the most dangerous place in America.” “These streets, once ruled by Jefferson, Lincoln, Truman, are now ruled by criminals,” intoned newly minted NRA spokesperson Charlton Heston while walking the gritty alleys of Washington, DC. “A few blocks away our leaders sleep in safety.” That line presaged the NRA’s post-Newtown ad accusing Obama of being an “elitist hypocrite” hiding behind armed guards (see further down).

1993: The “Laughing Criminal” ad. If you think House of Cards is realistic, you’ll enjoy this TV spot, conceptualized by LaPierre, which suggested that gun control is promoted by cynical politicians unwilling to get tough on crime. It also suggested that career criminals are discerning news watchers. Bonus: Watch for the appearance of the stereotypical ’80s nerd, who just happens to be pro-gun control.

1995: Bill Clinton is “daffy.” With the number of hunters on the decline, you’d think the NRA would embrace high-profile recreational shooters. Yet in this poster sold to its members, the NRA unintentionally distanced itself from its longtime stance that hunting was central to gun rights, declaring that “Mr. Clinton, the Second Amendment is not about duck hunting.” 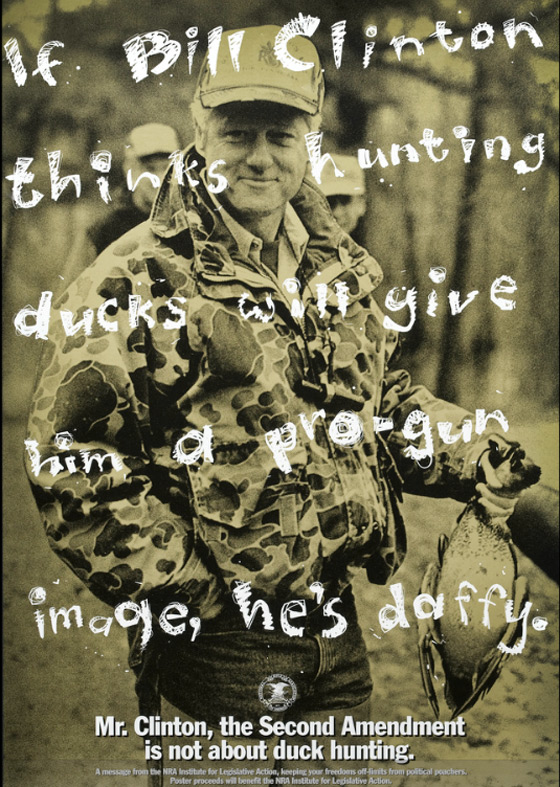 1997: “Gun rights are lost on our kids.” Heston promised to lead a $100 million, “three-year crusade…to restore the Second Amendment to its rightful place as America’s First Freedom.” For the kids, of course. 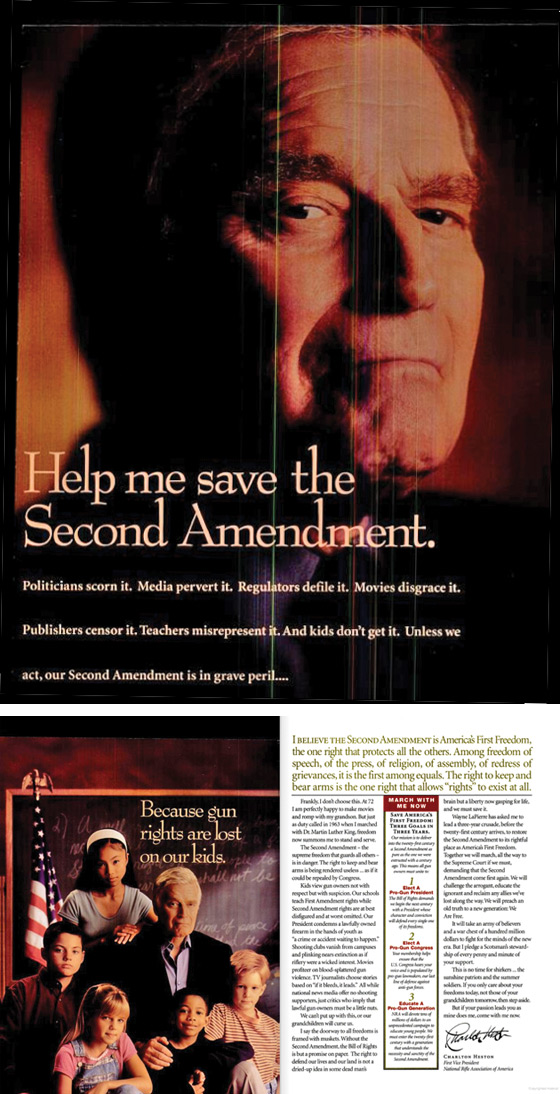 2013: “Are the president’s kids more important than yours?” All the anti-government paranoia, fear-mongering, and liberal-baiting of the past few decades culminated in this video, produced in the wake of the Newtown massacre. By opposing putting armed guards in every school in America, Obama proved himself to be “just another elitist hypocrite” whose kids are protected by the Secret Service.