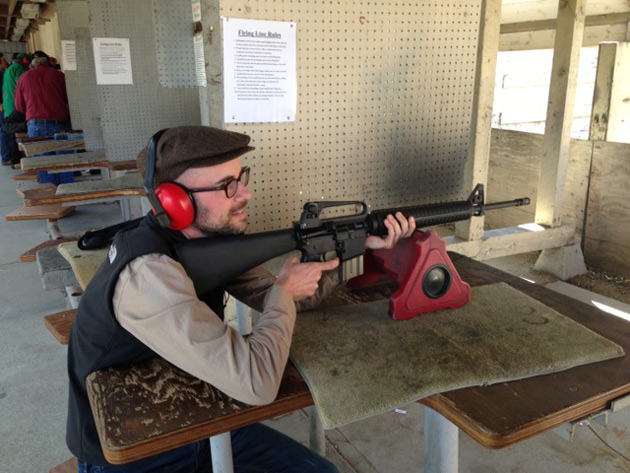 “By now it’s well known,” a grim-faced President Obama intoned last Wednesday after the Senate killed a package of proposals aimed at curbing gun violence, “that 90 percent of the American people support universal background checks that make it harder for a dangerous person to buy a gun. We’re talking about convicted felons, people convicted of domestic violence, people with a severe mental illness. Ninety percent of Americans support that idea.”

Those Americans, however, were in short supply on a recent evening at Rickey’s Sports Theatre & Grill in San Leandro, California, in whose parking lot one could spot jacked-up pickup trucks with bumper stickers like: “Liberal: A person so open minded that their brains have fallen out.”

I showed up at the bar to check out the monthly meeting of the NRA Members Council of Alameda County, a county that swings liberal, to say the least: the Free Speech Movement. People’s Park riots. Anti-war protests. The Black Panthers. Barbara Lee. Occupy Oakland. Berkeley. Quasi-legal pot. Alameda County has it all. If it were any further to the left, it might fall into the Pacific Ocean. Which is why it struck me as an unlikely home base for the National Rifle Association’s most prolific grassroots recruiter—by a long shot.

Last year, the Alameda County group signed up more than 2,000 new NRA members—more than twice as many as any of the gun lobby’s “club recruiters”—a category that includes fishing, hunting, and shooting groups all across America. The only folks who deliver more warm bodies to the NRA are individuals who work as professional recruiters, major gun dealers, and gun-related media outlets such as the website USACarry.com.

Inside the bar’s ramshackle banquet room, council president Jeff Torres held his NRA Lifetime Member cap across his camo-hunting-vest-covered heart as 40 local gun owners rose for the pledge. Next, his vice president, Paul Nelson, announced that the council has recruited nearly 1,100 new NRA members at a recent gun show near San Francisco, and as a result would receive more than $12,000 in commissions from the national group. “The stronger we get, the more the government has to listen,” said Torres, a retired professional bowler who wears auto-tint trucker glasses. “This is what these member councils are about.”

“We are the shock troops” for the NRA, one member told me.

The members council system was created in the late 1980s by Southern California auto parts salesman Paul Payne to “bring the policies, programs, and objectives of the NRA to the local level.” Payne now works full-time for the NRA coordinating the program, which operates solely in California, yet remains the closest thing the national organization has to a local chapter network. Most other grassroots gun groups operate independently, but the state’s 31 members councils work closely with the NRA on recruitment, special events, and lobbying. “We are the shock troops,” one member tells me.

“People are scared that there are going to have their rights taken away,” Torres responded when I asked about the group’s recruiting prowess. The new recruits, he said, are people who have been worried (apparently in vain) about federal gun control legislation, as well as a raft of laws currently under consideration in California—including an ammo tax and a ban on semi-automatic rifles that accept removable magazines. The speed at which the local council has been able to attract new members suggests that, if anything, public outcry following the Newtown massacre has merely made the NRA stronger. Gun owners may be in the minority, but they have rallied to the cause.

Participating in a gun buyback, says one member, would be “like getting castrated because you think the neighbors have too many kids.”

At Rickey’s, over pints of Drake’s IPA and baskets of onion rings, the council members dissected each of dozens of proposed national and state gun control measures. Alan, an accountant with a tidy mustache who owns two AR-15s, expressed his view that participating in a gun buyback would be “like getting castrated because you think the neighbors have too many kids.” Banning high-capacity magazines, he added, would do nothing because, “with 3-D printers you can push these things out like hotcakes.” He also ridiculed laws promoting biometric “smart guns” as the creation of “dumb politicians.”

Alan got particularly worked up by the use of the phrase “gun rights.” At the mere thought of it, he raised his voice and began gesticulating wildly. “Guns don’t have rights! People have rights!” he shouted as he bent down and stabbed the middle of my table with his finger. “Every time you fall into the trap of talking about gun rights, you fall into the Saul Alinsky nonsense of making the gun the focus and not your rights! Stop this gun rights crap!”

“Civil rights,” added someone sitting nearby.

A few weeks after that first meeting, I dropped in on the council’s “fun shoot” at the San Leandro Rifle and Pistol Range, a strip of targets and benches sandwiched between a city dump and a wastewater treatment plant at the edge of town. The session, intended for novice shooters, began with a short safety class, followed by the chance to shoot members’ guns. I squeezed off some rounds from a Glock semi-automatic, a Smith & Wesson revolver, and one of Alan’s assault rifles. He told me he used to clean an AR-15 on his balcony in Oakland, in plain sight of the local crack dealers, in what he and a friend called “neighborhood relations days.”

Despite the county’s ethnic diversity (it was only 34 percent Caucasian as of 2010), most of the members I met were white men. (The council does have a smattering of women, as well as black, Asian, and Latino members.) But the most notable minority at the meetings seems to be liberals. The only one I encountered was Audie Bock, who, for a brief period in the late ’90s, became the nation’s highest-ranking member of the Green Party, representing Oakland and Piedmont voters in the state Assembly. The NRA is “the only nationwide institution that is really standing up for constitutional rights,” says Bock, who has since quit the Greens and calls herself an independent.

“If somebody comes in through that door,” a 78-year-old woman tells me, “I want to have a gun.”

Of course, many people join the Alameda County Members Council for reasons that have nothing to do with the Constitution. The group’s leaders say most of its members enroll at area gun shows, where buying an NRA membership gets you through the door for free. Others simply enjoy talking shop about gun specs, or teaching or attending workshops on how to make bullets at home. And then there’s Joy Bailey, a permed and petite 78-year-old widow I met at Ricky’s, who lives alone with her ailing dog. “I have absolutely nothing to protect myself,” she told me. “If somebody comes in through that door, I want to have a gun.”

Senior citizens, in fact, predominate at the local council meetings, which is one reason the council recently reached out to the University of California-Berkeley College Republicans. I tag along as council member Guy Smith, the editor of GunFacts.info, visits the campus in his trademark black cowboy boots to address a classroom full of students in sweatshirts and flip-flops. Following his 45-minute training session on NRA talking points—”Do guns kill people? Yeah. But guns also keep people from getting killed”—the students invite him to their traditional post-meeting soiree at Yogurt Town.

That’s where I run into Andrew Glidden, a tall, skinny, intense Cal senior who is busy geeking out with Smith on the finer points of Second Amendment case law. In the end, Glidden and Smith agreed on just about everything, except the value of joining the NRA. “They throw other civil rights issues under the bus,” Glidden tells me. He’s angry with the group for ignoring the First Amendment in calling for a ban on violent video games, and for disregarding the Fourth and Fifth amendments in pushing to place armed police in schools. “Their focus is just so much on the Second Amendment that they’ve decided that every other right is negotiable,” he says.

At the next members council meeting, Nelson, the VP, asked me to brief the group on the UC-Berkeley event. I told them the Cal students appreciated Smith’s talking points, which was true. What I left out, because I didn’t have the heart, was that it seemed like the nation’s top-recruiting NRA group might eventually find itself with a recruitment problem.