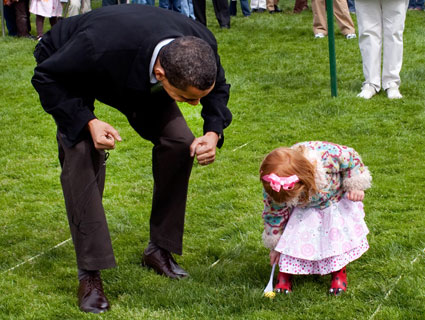 President Barack Obama’s new budget has much of his own base up in arms, particularly over $230 billion in proposed cuts to Social Security. On Thursday, House Minority Leader Nancy Pelosi (D-Calif.) convened a meeting of House Democrats to hear a closed-door debate on the proposal, which would cost retirees hundreds of dollars a year by tying the growth of monthly Social Security benefits to a new, lower measure of inflation called chained CPI. It was unclear whether the meeting changed any minds, but it certainly highlighted the divisions between the president and his party.

Speaking to reporters after the debate, many Democrats complained that Obama put the cuts on the table far too early. Rep. Louise Slaughter (D-N.Y.), the top Democrat on the House rules committee, likened Obama’s negotiating skills to the eagerness of a five-year-old. “When I was a kid, I couldn’t play hide and seek,” she said. “The pressure was just too much on me. I would hop up and say, Here I am! This is the way this negotiation is taking place. We’re trying to get a grand plan out of Republicans. It would be better instead of hollering up, Here I am! to get that agreement first, before you put it in your budget.”

Rep. Nydia Velázquez (D-N.Y.) said she could envision putting chained CPI in the budget, but only as a product of negotiations, not as an initial offer, and only as part of a grand bargain with additional revenues, and investments in other progressive priorities. “We don’t know what the other side is willing to offer,” she said. “We cannot give anything on a silver platter.”*

Other Democrats were outright opposed to the president’s plan. Rep. Keith Ellison (D-Minn.) looked positively distraught. “I can only say that the Progressive Caucus is dead set against it,” he said. Rep. Jan Schakowsky (D-Ill.) said she had no idea why Obama is embracing what was initially a Republican idea. “Chained CPI was a bad idea when [GOP Speaker of the House John] Boehner had it, and it’s a bad idea now,” she said, adding that measure would hurt seniors much more than the recent tax hikes on high-earners hurt them. Dean Baker of the Center for Economic and Policy Research has calculated that switching to chained CPI would cut about 2 percent of seniors’ retirement income over 20 years. By contrast, the hit that the rich got from Obama’s New Year’s tax increases was only 0.6 percent.*

Rep. Sheila Jackson Lee (D-Tex.) said she hopes her party doesn’t cave and line up behind the president. “This is so serious because…it will last forever,” she said. “If we institutionalize the chained CPI, we will literally throw generations into poverty.”

The debate House Democrats attended pitted Damon Silvers, the associate general counsel of the AFL-CIO, against Robert Greenstein, president of the left-leaning Center on Budget and Policy Priorities. Silvers adamantly opposes chained CPI. Greenstein argues that the plan could be workable, but only if included in a bipartisan deal that preserves spending on things like antipoverty programs and infrastructure, and contains protections for the oldest and poorest beneficiaries, as the president’s budget does.

Pelosi suggested that many in her caucus thought chained CPI should be preserved as an option for making Social Security solvent in the long run, not as a way to pay down the national debt. “The deficit is not about Social Security,” said Rep. Rush Holt (D-N.J). “What puzzles me is why the president would do this.”

But nearly every House Democrat who spoke to reporters after the event suggested that, other criticisms aside, Obama’s chained CPI proposal is bad politics. “Our brand is the party that brought you Social Security,” Holt said. Slaughter added that she has been swamped with calls by unhappy constituents opposing the president’s idea. “I’m at a loss for words,” she said. “There are so many people living hand to mouth, day to day.”

Correction: An earlier version of this article misspelled Rep. Velázquez and Rep.Schakowsky’s names.