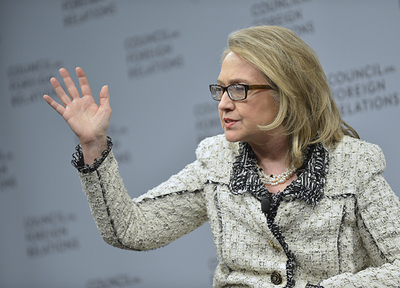 Ready for Hillary, the fledgling super-PAC committed to nudging Hillary Clinton into the 2016 presidential race and electing her the country’s 45th president, was initially met with furrowed brows. A Hillary super-PAC this early? Is this a legit group or a love letter from adoring fans?

Ready for Hillary appears to be the real thing. Over the weekend, the New York Times reported that Harold Ickes, the longtime aide to Bill and Hillary and Democratic fundraiser extraordinaire, is advising Ready for Hillary. Another Clinton White House alum, James Carville, is also helping the super-PAC.

Enlisting Ickes is a coup for Ready for Hillary, the most high-profile of the three pro-Hillary super-PACs. He’s one of the most tireless, tenacious fundraisers in Democratic politics, with thick skin and an even thicker Rolodex. Here’s an excerpt from my 2012 profile of Ickes:

In early 2011, Sean Sweeney and Bill Burton, the former Obama White House aides who cofounded Priorities USA Action (a painfully bland name they settled on, as Burton told the New York Times Magazine, because their first 60 choices were already taken), enlisted Ickes to help close that gap. A fiery and highly respected Democratic operative who’s worked on more than a dozen presidential campaigns and inside the White House, Ickes is a savvy and dogged fundraiser with a reputation for pulling in big money—the kind of seven- and eight-figure checks needed to compete with Rove’s Crossroads groups and Charles and David Koch’s extensive donor network. His connections run deep in Washington and in the insular, prickly world of Democratic donors, especially Clinton supporters. Ickes served as deputy chief of staff in the Clinton White House and advised Hillary during her Senate and presidential campaigns; indeed, Ickes was tapped to plan her first Senate campaign on the same day in 1998 that the Senate dismissed the articles of impeachment against Bill. Clinton donors trust Ickes with their millions, and those millions are crucial to any outside Democratic effort.

Ickes, who turns 73 in September, works out of a sleek office near Dupont Circle that he and his longtime aide-de-camp, Janice Enright, share with a handful of lobbying and consulting shops. (Ickes and Enright have worked in the same room since their days in the Clinton White House.) His purple hounds-tooth shirt is open to the third button, and he occasionally pulls a comb through his thinning auburn hair. He closes his steel blue eyes when beginning a story, then opens them and stares into yours to make a point. He digresses easily and peppers his sentences with “fuck” and “bullshit.”

“He is a brilliant, take-no-prisoners, consummate political operative who has seen everything, done almost everything, and is still standing,” says Rob Stein, founder of the Democracy Alliance donor network. “There’s nobody like him in the Democratic ranks.”

Burton and Sweeney certainly seem to think so, having brought Ickes on to hunt for big donations. It’s a tall order, even for an experienced fundraiser. Loyal Democratic donors loathe the Citizens United decision and the Wild West campaign finance landscape it helped usher in, and they recoil from super-PACs. Some feel Obama hasn’t courted his donors sufficiently. Others simply aren’t yet fired up enough to write checks. Yet without that outside ammunition, Obama and congressional Democrats face the prospect of drowning in a deluge of Republican money. GOP super-PACs and nonprofits could wrest control of the Senate from the Democrats—and they could make the difference between a second Obama term and a Romney presidency.

Of course, Ickes and the Priorities USA team went on to great success in the 2012 campaign. They may not have outraised and outspent the Republicans—Sheldon Adelson made sure of that—but they collected enough money and spent it wisely enough to tarnish Mitt Romney’s image and give the Obama campaign vital air cover in Ohio.

Ickes told me recently that Clintonland is abuzz with questions and speculation about Hillary running. Many Democratic donors, he went on, are waiting on the sidelines to see what she does. “A lot of the people I know, a lot of them are Hillary people to begin with, but boy, they’re not about to part with a dollar till they see what she’s going to do,” he said.

If she runs, you can bet that Ready for Hillary will be welcoming all those donors with open arms.