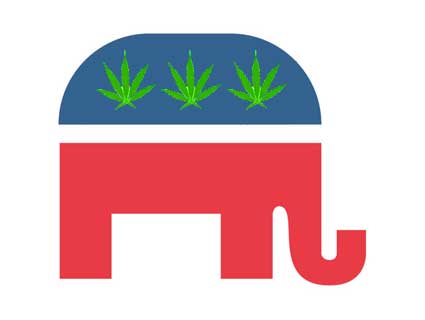 Few ideas have more support from voters and less from national politicians than legalizing marijuana. While major polls now show that most Americans back the concept, the president and leaders in Congress won’t touch the issue except to laugh it off.

Like pothead soccer dads in the sitcom Weeds, however, some of the biggest backers of legalization are turning up where you’d least expect them. Take, for example, Rep. Dana Rohrabacher, who last week introduced a bill designed to prevent the feds from arresting pot growers and tokers in states where the drug is legal. “This approach is consistent with responsible, constitutional, and conservative governance,” the 13-term congressman from California’s ultraconservative Orange County told me.

“The federal government’s total prohibition of marijuana has been neither effective nor efficient.”

Until recently, Republicans who supported ending pot prohibition were about as common as unicorns. There were US Rep. Ron Paul (R-Texas), and, well, some prominent former Republicans such as New Mexico Gov. Gary Johnson and Colorado Rep. Tom Tancredo. After ditching her Alaska governor job for a Fox News gig a few years ago, Sarah Palin finally stuck her neck out: “If somebody’s gonna smoke a joint in their house and not do anybody else any harm,” she said on Fox’s Freedom Watch in 2010, “then perhaps there are other things our cops should be looking at to engage in, and try to clean up some of the other problems that we have in society.”

Back then that was crazy talk. Now it’s mainstream enough that Rohrabacher’s new marijuana bill has already attracted two other Republican cosponsors: Reps. Justin Amash of Michigan and Don Young of Alaska.

Rohrabacher got turned on to marijuana activism about 10 years ago, when he had to spoon-feed his dying mother because she’d lost her appetite. He learned that medical marijuana might help her eat. “My interest has evolved from there,” he says.

Today, he sees no reason why the GOP shouldn’t want to legalize cannabis for everyone. “Among other things, Republicans believe in effective and efficient policies, small government, liberty, and strong national security,” he said in an email. “The federal government’s total prohibition of marijuana has been neither effective nor efficient, has violated the liberty of millions, and jeopardizes our national security. Republicans—both voters and members of Congress—are beginning to understand this.”

Young Americans, according to recent polls, support pot legalization at the rate of nearly 2 in 3.

To be sure, Rohrabacher’s Respect State Marijuana Laws Act (HR 1253) is far from the only bill in Congress that would wind down the federal war on weed. But unlike the efforts of liberal Democrats who want to remove marijuana from Schedule I of the Controlled Substances Act, the bill or something like it may have a decent shot at passing in the not-too-distant future. As Rohrabacher puts it: “It’s a pragmatic approach that can appeal to individuals who, regardless of their view as to whether marijuana should be legalized, believe states should be allowed to determine their own marijuana policies.”

In addition to striking a note with pro-states-rights Republican Congressmen, the bill should appeal the American people, 60 percent of whom believe that states ought be able to set their own marijuana policies, and even more so, young people, who support pot legalization at the rate of nearly 2 in 3.