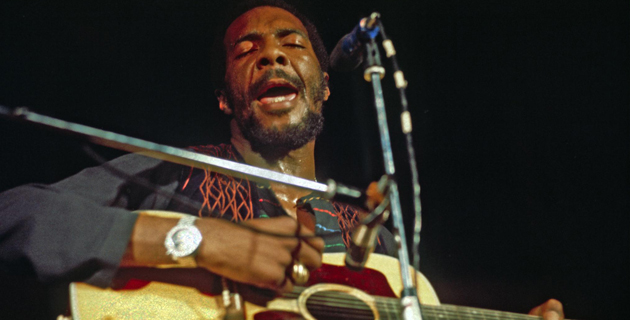 On Monday, celebrated folk singer Richie Havens died of a heart attack at his Jersey City home at the age of 72. The Brooklyn-born musician was famous for his distinctive, husky baritone, and was a skilled and tough guitar player who could turn strummed rhythms into rhapsodies. He recorded and performed some of the best acoustic covers of the ’60s and ’70s, including renditions of Bob Dylan’s “Just Like a Woman” and (my personal favorite) George Harrison’s “Here Comes the Sun.”

Havens dabbled in cinema, including acting alongside comic giant Richard Pryor in 1977’s Greased Lightning, a film about Wendell Scott, the first African-American to get a NASCAR racing license. Quentin Tarantino used his signature song “Freedom” in a pivotal shootout sequence in Django Unchained. Havens toured tirelessly for nearly five decades. But since history has a nasty habit of reducing notable lives into single episodes, Havens will forever be remembered as the man who opened Woodstock ’69 with a mesmerizing three-hour set.

Through all this, he maintained his passion for liberal politics, environmental action, and education. Though he wasn’t the most fiercely political or ideological of his generation of entertainers, his dedication and interest were impressive nonetheless. In 1976, Havens cofounded the North Wind Undersea Institute, an oceanographic children’s museum in the Bronx that reportedly “has a history of rescuing marine animals.” He also formed the Natural Guard, an international organization created to promote hands-on activities that teach children about ecology and the environment. Here he is talking about it in the early ’90s:

“I’m not in show business; I’m in the communications business,” Havens told the Denver Post. “That’s what it’s about for me.” You could feel this in virtually everything he recorded or sang on stage, most evidently in “Handsome Johnny,” a song he cowrote that became a civil rights and anti-Vietnam War anthem. In 1978, his song “Shalom, Salam Alaikum,” written after watching Egyptian President Anwar El Sadat’s visit to Jerusalem, was a huge hit in Israel. And on a lesser note, Havens performed at Bill Clinton’s presidential inauguration in 1993.

To the very end, he was a gentle soul pushing for peace, justice, and damn fine music.

I’ll leave you with footage of the Transcendent Nation Foundation interviewing Havens in 2008 about “how to save the world”: