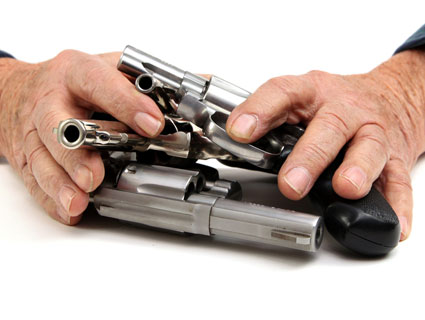 The compromise amendment on expanded background checks that Sens. Joe Manchin (D-W. Va.) and Pat Toomey (R-Pa.) announced Wednesday morning has yet to be released to the public. But the senators released a fact sheet on Wednesday afternoon that begins to clear up some answers sought by gun control groups and uncommitted senators. (Read it in full below, via the Huffington Post.)

Titled “The Public Safety and Second Amendment Rights Protection Act,” the amendment expands the existing background check system to cover sales at gun shows and on the internet, “encourages” states to put all their available records into the National Instant Criminal Background Check System, and establishes a National Commission on Mass Violence “to study in-depth all the causes of mass violence in our country.”

Here’s a rundown of additional key components of the Manchin-Toomey amendment as spelled out in the fact sheet:

And, the fact sheet adds, the amendment would “not, in any way, shape, or form infringe upon anyone’s Second Amendment rights to keep and bear arms.”

On Wednesday afternoon, several Republican senators said they had yet to digest the amendment’s details. One of them was Sen. Tom Coburn (Okla.), whom Manchin and Sen. Chuck Schumer (D-N.Y.) had aimed to work with prior to working with Toomey—until gun-rights activists apparently got to Coburn.

Late Wednesday, Coburn released a statement calling the compromise the “wrong approach” that would “impose new taxes and unreasonable burdens on law-abiding citizens” and prioritize “collecting records over protecting citizens.” Still, Sen. John McCain (R-Ariz.), who has supported expanded background checks in the past but remains on the fence now, said he believed the legislation would survive filibuster threats and get a vote.