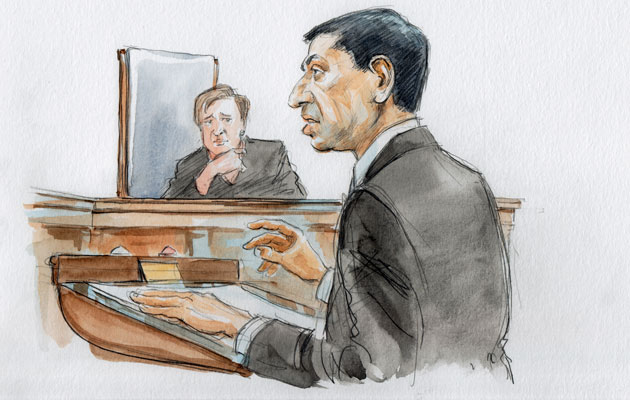 The New Yorker‘s Jeffrey Toobin calls Sri Srinivasan, the government lawyer Barack Obama has nominated to the prestigious US Court of Appeals for the DC Circuit, “the Supreme Court nominee in waiting.” But you could also call him a mystery.

On Wednesday, the Senate Judiciary Committee will hold a hearing on Srinivasan’s nomination to the DC Circuit—often considered a place for potential future Supreme Court nominees. He would be the first Asian American and Indian American judge on that court.

Srinivasan’s background is as a litigator, meaning he’s spent most of his career defending other people’s positions rather than his own. That means that although he’s well regarded among legal elites of all stripes, his own views are less than clear. At a time when Republican obstruction has ground the confirmation process to a halt, and the outspoken progressivism—or even mild progressivism—of prior Obama nominees has run into GOP filibusters, Srinivasan’s unclear record offers Republicans few legitimate reasons to block him. It also means that liberals can’t be sure that Srinivasan actually shares their views.

“I don’t think anybody is going to suggest that he’s being put forth as the next Thurgood Marshall or Justice Brennan. He does not come out of that kind of background,” says Caroline Fredrickson, president of the progressive American Constitution Society. But, she argues, he is “extremely well qualified” and “probably has the perfect resume for anyone who would be nominated to the DC Circuit.” Doug Kendall, president of the liberal Constitutional Accountability Center, calls Srinivasan “unquestionably brilliant” but acknowledges that Srinivasan’s record “is not progressive-forward; it is as non-ideological as you can find.” (Neither organization has formally endorsed Srinivasan’s nomination).

Last Friday, Earth Rights International, a human rights and environmental group, sent a letter to the Senate Judiciary Committee urging senators to demand answers on Srinivansan’s private-sector work defending oil giant Exxon. In 2011, while working for O’Melveny & Myers LLP, Srinivasan argued that corporations couldn’t be held liable for human rights abuses they are complicit in abroad—specifically, in this case, alleged acts of murder and torture. ERI supported the plaintiffs in that litigation.

Curiously, ERI’s letter is some of the only opposition Srinivasan has faced in the weeks leading up to his confirmation hearing, despite earlier concerns expressed by liberal groups. Last June, AFL-CIO chief Richard Trumka said that “we need judges who understand the issues that working families face in today’s economy. Srinivasan’s record should be closely examined to get a full picture of his professional background and experience.” Likewise, the liberal legal group Alliance for Justice said last June that Srinivasan’s record and background “left open some questions about his commitment to workers’ rights and to the rights of everyday Americans facing corporate and banking interests in the federal courts.”

It’s understandable that liberals might look skeptically at Srinivasan. In 2010, Srinivasan unsuccessfully tried to convince the Supreme Court to grant a new trial for Enron president Jeffrey Skilling, who was convicted in connection with one of the most significant financial fraud scandals in recent history. Srinivasan also successfully represented a newspaper publisher that fired its employees for using their union to attempt to pressure the paper to reverse what the employees saw as biased interference in their reporting. The DC Circuit hears a lot of labor and regulatory cases, so the fact that Srinivasan has defended corporate clients against unions and plaintiffs alleging human rights abuses might cause some liberal groups anxiety. But they are keeping quiet, possibly because they view his nomination to the DC Circuit as a done deal or because they trust the administration’s judgment. The DC Circuit also skews so conservative that even if Srinivasan is more moderate than liberals might want, he would still offer some ideological balance.

Srinivasan has his defenders—many of them. They include a whole slate of former solicitors general from both parties, including Clinton-era acting Solicitor General Walter Dellinger, who is a partner at the law firm where Srinivasan worked when he defended Exxon. A small army of former Supreme Court clerks signed a letter endorsing Srinivasan’s nomination. Also excited for Srinivasan is the former Supreme Court justice he clerked for, Sandra Day O’Connor, who was appointed by President Ronald Reagan. O’Connor told Toobin that Srinivasan was “a wonderful choice.”

The White House can also point anxious liberals to Srinivasan’s work in Obama’s solicitor general’s office, and to pro bono briefs he filed opposing Indiana’s restrictive voter ID law and supporting affirmative action. Srinivasan successfully prevented a legal immigrant from being deported over a minor gun offense and represented a Spanish-speaking child in Arizona in a case alleging the state had failed to provide enough English-instruction to students learning English as a second language. Srinivasan also successfully represented a criminal defendant before the Supreme Court who had been charged with a felony because he purchased cocaine on his cellphone, when he would have been charged with a misdemeanor otherwise. Srinivasan wrote a brief siding against the government and with the target of unconstitutional surveillance in a brief filed in the important US v. Jones case. Perhaps most importantly for observers wondering whether Srinivasan plays for team blue or team red, he was on the legal team that represented Al Gore in Bush v. Gore.

Attorneys don’t always share the views of the clients they represent—in fact, depending on the types of cases they take, they often don’t. They are simply doing a job for a client. But by that token, none of the work Srinivasan has done on behalf of the Obama administration should necessarily reassure liberals that Srinivasan’s views on legal matters are closer to those of Justice Ruth Bader Ginsburg than to Chief Justice John Roberts.

Not everyone agrees that Srinivasan’s views are tough to pin down. “You could say that he’s hard to categorize, but that’s an unfair statement,” argues John Yang of the Asian Pacific American Bar Association. “I think it’s that he’s a straight shooter and he calls it like he sees it.” But if Srinivasan represented his firm’s corporate clients out of personal conviction, rather than his duty as a lawyer, that could worry liberals even more.

The White House has been pushing Srinivasan’s nomination to the DC Circuit Court harder than any non-Supreme Court pick. Srinivasan has more bipartisan legal muscle behind him than any other federal court nominee in recent memory. Legal elites of all political stripes consider him one of the best lawyers in the country. But no one really knows what he believes.

Clarification: A previous version this post stated that the Constitutional Accountability Center does not endorse candidates, it has simply not endorsed in this case.