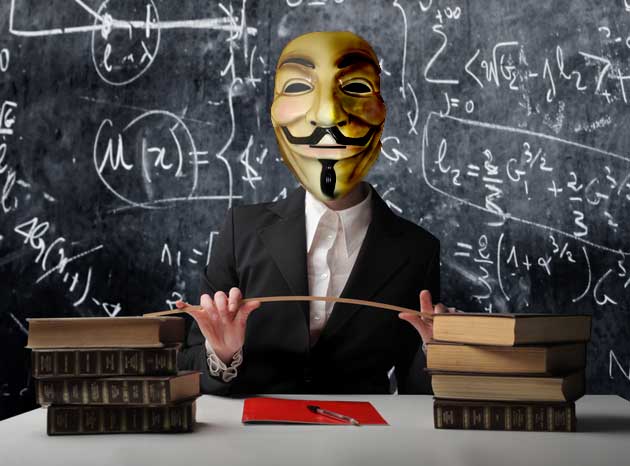 In late December, Anonymous hacked the Steubenville, Ohio, high school football team’s fan website in retaliation for its players’ involvement in the gang rape of a 16-year-old girl. The hackers threatened to post students’ and teachers’ Social Security numbers unless the girl received an apology; someone else sent the school a bomb threat. The hactivist group’s antagonistic relationship with Steubenville High quickly made headlines, but what has gone unreported until now was how Anonymous quietly reached out to the school at the same time, hoping to visit classes and teach students how to identify and prevent rapes.

A female Anonymous member approached Steubenville High about teaching rape prevention. Not surprisingly, she was rebuffed.

In early January, the Anonymous spokesman in Steubenville, @Master_of_Ceremonies (MC for short), convinced a female Anonymous member to pitch school officials on the idea of a rape awareness class. “He believed that there needed to be someone to get into the schools to bring a new approach to the system on assault, bullying, rape, and when not to be afraid to speak up and do something when someone is in trouble,” she wrote me via MC. The Anons also wanted to “give the kids a different viewpoint of what [the group’s Steubenville operation] was all about, other than what the teachers were telling them,” she wrote.

Her call wasn’t well received. “Our teachers are qualified and more than capable of teaching our students about rape, not people in masks, who go around terrorizing people,” the Anon recalls a school official saying before hanging up. (Administrators with Steubenville High could not be reached for comment.)

Since then, Anonymous’ success in making the Steubenville rape a national story has prompted dozens of pleas for help from other alleged rape victims. MC and his friends can’t possibly fact-check all of their stories, and they’re reluctant to blindly become “somebody’s personal army,” as he puts it. Moreover, he isn’t sure that investigating and publicizing another sexual crime is even the best way to cut down on rapes. The problem, as he now sees it, is a lack of education. One of the convicted Steubenville rapists had claimed in his defense that he didn’t know rape could include fingering a girl’s genitals. “If you don’t know that,” MC says, “that means you don’t get taught that.”

Ohio requires all high schools to offer a course in teen dating violence prevention, but it provides no funding for the job. Some schools still don’t offer the training, says Katie Hanna, the executive director of the Ohio Alliance to End Sexual Violence. The availability of similar courses in other states varies widely; some don’t want teachers to talk about anything sex-related, besides abstinence.

MC doesn’t have a background in education or sexual violence prevention, but his work with Anonymous has given him a pretty good idea of what he’d like to talk about. He’d like to say that if saw two guys lugging off a drunk girl by her hands and feet with the intent to rape her—as happened in Steubenville—he’d knock those guys out cold and drag them outside. Or that if you shoot a video of somebody joking about a rape, you should hand over that video to the cops as evidence, or else you’re as much of a bastard as the rapists. Or that Anonymous is everywhere, so rapists had better be careful: “As long as they think somebody is always watching,” he told me, “that might deter some things.”

MC is under no illusion that schools will welcome Anonymous into their classrooms. “A lot of Anons are pro-legalizing marijuana,” he points out. And then there’s perhaps the bigger problem of the ones who are in prison for hacking corporate websites.

“We would be open to talking to Anonymous,” says a rape prevention educator.

Yet I spoke with the leaders of several groups that work to raise awareness about sexual violence, and they didn’t dismiss the idea of partnering with Anonymous. “We would be open to talking to them, certainly, yeah,” said Hanna of the Ohio Alliance to End Sexual Violence.

Anonymous deserves a lot of credit for putting high school rape on the national radar, says Tracy Cox, spokeswoman for the National Sexual Violence Resource Center. Although she would be worried that victims of sexual assault might be frightened by hearing about rape from men in Guy Fawkes masks, she figures a bit of explanation about “what the mask symbolizes” could allay their fears. The question of a partnership is more about “how we get there,” she adds. “I think it’s great that people want to get involved. That’s what we want.”

It’s also unclear how many Anons would be interested in taking on that type of role. Standing in front of a blackboard isn’t exactly the stuff of hackers, but then, neither is a lot of what Anonymous has been doing of late. “There’s a lot of things that are totally messed up with the culture,” MC says, especially when it comes to “sports and stuff.” But, he adds, “if you can get to the kids in grade school, middle school, and even high school, that could change a lot of things right there.”