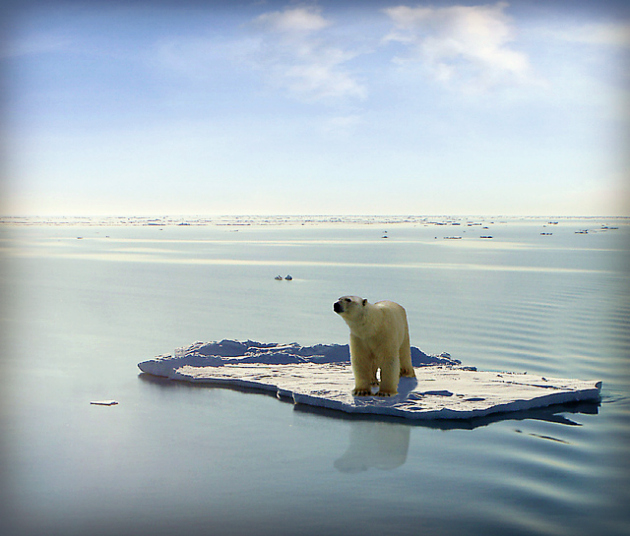 As predicted by chemistry, change in the Arctic Ocean is accelerating as temperatures warm faster than the global average, as the sea ice melts, as northern rivers run stronger and faster, delivering more fresh water farther into the northernmost ocean, and as we continue blasting an ever increasing quantity of greenhouse gases into the atmosphere. The Arctic Ocean Acidification Assessment, a new report from the Arctic Monitoring and Assessment Program (AMAP), presents these 10 key findings:

1. Arctic marine waters are experiencing widespread and rapid ocean acidification. In the Nordic Seas, acidification is taking place over a wide range of ocean depths, from surface waters (faster) to deep waters (more slowly). Seawater pH has declined ~0.02 per decade since the late 1960s in the Iceland and Barents Seas. Other ocean acidification signals have also been encountered in surface waters of the Bering Strait and the Canada Basin of the central Arctic Ocean.

2. The primary driver of ocean acidification is uptake of carbon dioxide emitted to the atmosphere by human activities. The ocean has swallowed our atmospheric carbon dioxide emissions and slowed global warming during the past few critical decades while we dithered in disbelief. But the cost of temporarily delaying even more warming has been the increasing acidification of seawater. The average acidity of surface ocean waters worldwide is now ~30% higher than at the start of the Industrial Revolution.

3. The Arctic Ocean is especially vulnerable to ocean acidification. Arctic rivers plus melting ice input huge (and increasing) amounts of freshwater into the Arctic Ocean, changing the chemistry and making it less effective at neutralizing CO2’s acidifying effects. Add the fact that cold waters slurp up more CO2 from the air. Add the fact that dramatic decreases in Arctic summer sea-ice cover—real and projected—allow for greater transfer of CO2 from the atmosphere into the ocean. These combined influences make Arctic waters among the world’s most easily acidified.

4. Acidification is not uniform across the Arctic Ocean. Other processes influence the pace and extent of ocean acidification. Rivers, sea-floor sediments, and coastal erosion all supply organic material that bacteria can convert to carbon dioxide, exacerbating ocean acidification, especially on shallow continental shelves. Sea-ice cover, freshwater inputs, and plant growth and decay also influence local ocean acidification. The contributions of these processes vary from place to place, season to season, and year to year. The result is a complex, unevenly distributed, ever-changing mosaic of Arctic acidification states.

5. Arctic marine ecosystems are highly likely to undergo significant change due to ocean acidification. Arctic marine ecosystems are generally characterized by short, simple food webs, where energy is channeled in just a few steps from small plants and animals to large predators like seabirds and seals. The integrity of such a simple structure depends greatly on keystone species. Pteropods (sea butterflies) and echinoderms (sea stars, urchins) are key food-web organisms that may be sensitive to ocean acidification. Too few data are presently available to assess the precise nature and extent of Arctic ecosystem vulnerability, as most biological studies have been undertaken in other ocean regions. Arctic-specific long-term studies are urgently needed.

7. Ocean acidification impacts must be assessed in the context of other changes happening in Arctic waters. Arctic marine organisms are experiencing not only acidification but also other large simultaneous changes: climate change, harvesting, habitat degradation, and pollution. Ecological interactions—e.g. between predators and prey, or among competitors—also play an important role in shaping ocean communities. As different marine life responds to environmental change in different ways, the mix of plants and animals in a community will change, as will their interactions with each other. We don’t know much of anything about this yet.

8. Ocean acidification is one of several factors that may contribute to alteration of fish species’ composition in the Arctic Ocean. Ocean acidification is likely to affect the abundance, productivity, and distribution of marine species. But the magnitude and direction of change are uncertain. Other processes driving Arctic change include rising temperatures, diminishing sea ice, and freshening surface waters.

10. Ecosystem changes associated with ocean acidification may affect the livelihoods of Arctic peoples. Marine species harvested by northern coastal communities include species likely to be affected by acidification. Most indigenous groups harvest a range of organisms and may be able to shift to a greater reliance on unaffected species, but these changes would likely exert a cultural toll. Recreational fish catches may change to different species. While marine mammals—important to the culture, diets and livelihoods of Arctic indigenous peoples and other Arctic residents—are unlikely to escape changes in the Arctic Ocean food web.