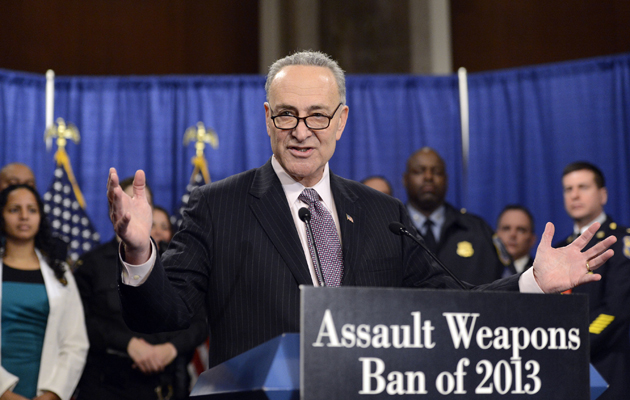 After leading the Senate’s unsuccessful push for background check legislation, Sen. Chuck Schumer (D-N.Y.) has a new target: “Wiki Weapons.” At his usual Sunday press conference, Schumer announced his support for legislation that would criminalize the production of firearms made from 3-D printers (which can replicate or “print” plastic objects using digital files).

The bill was introduced in April by Rep. Steve Israel (D-N.Y.) in response to the boasts of University of Texas law student Cody Wilson, who last fall launched a company called Defense Distributed to manufacture the plastic guns. On Monday, Wilson unveiled the first fully-operational prototype, a handgun he calls “the Liberator.” The file has already been downloaded 50,000 times.

But there’s a problem with Schumer’s pitch: The legislation in question would not stop the guns from being made. Israel’s bill is mostly a reauthorization of the Undetectable Firearms Act of 1988, which was originally written to combat the anticipated onslaught of fully plastic Glocks. (It was an onslaught, Bloomberg Businessweek‘s Paul Barrett explained, that never really materialized.) It’s not especially controversial, and part of the reason is that it doesn’t take many significant steps to stop 3-D-printed weapons from being printed.

Israel’s spokeswoman, Samantha Slater, made clear when I interviewed her for a story on the subject in December that the legislation would not regulate 3-D printers themselves. That’s important, because each 3-D printer, sold for as little as $1,000 apiece, currently has the capacity to function as a mini weapons plant. As Schumer put it, “We’re facing a situation where anyone—a felon, a terrorist—can open a gun factory in their garage and the weapons they make will be undetectable. It’s stomach-churning.”

But the proposed bill makes no attempt to regulate who can and cannot purchase said gun factory; 3-D printers are still available for anyone to use. Likewise, while the guns are printed from files that are posted online, there is no restriction in the bill on what kind of 3-D printer files you can post online. (Thingiverse, the internet’s preeminent database of downloadable 3-D printer files, banned Wilson from posting his Defense Distributed instructions, but in response he simply set up his own website, DEFCAD, which he calls, “the island of misfit objects.”)

Israel’s legislation does make a couple of major additions to the original Undetectable Firearms Act. His bill requires the gun’s magazine to adhere to the detectability standard, by including “1 ounce of material type 17-4 PH stainless steel, in a shape resembling an ammunition magazine.” That would render Wilson’s fully plastic “Feinstein” AK-47 magazine and the AR-15 “Cuomo” magazine illegal. It also mandates that any “major component” of the gun “generate an image that accurately depicts the shape of the component.” 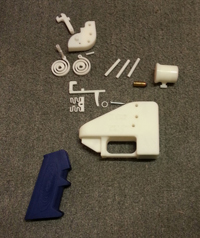 That would seem to put the Liberator in jeopardy. Wilson’s recipe for printing a gun calls for inserting a six-inch steel firing pin into the receiver of device early on in the process, and then building the rest of the weapon around it. That makes it “detectable” under current law but not under Israel’s version, because he expands the requirements to include all “major components” of the weapon. The detectability is mostly superficial: There’s really no way to stop someone from simply replacing the metal rod with something else.

But Wilson has an easy out. Specifically, the law exempts licensed firearms manufacturers, allowing them to develop plastic firearm prototypes for the purposes of testing their detectability. In March, the Bureau of Alcohol, Tobacco, Firearms and Explosives, which enforces the Undetectable Firearms Act, granted Wilson a license to do just that. As long as he has that, he can continue building and testing guns, and he can continue to post the results of his tests for anyone to see—he just can’t sell anything.

The larger problem facing Schumer isn’t the legislation’s loopholes, though; it’s gun control writ large. As Wilson himself points out, there are already upwards of 300 million nonplastic firearms currently in circulation in the United States, and they’re pretty easy to get a hold of. (It’s also already perfectly legal to make your gun from normal materials.)

At his press conference, Schumer warned that the Wiki Weapon would be particularly dangerous in the hands of a violent felon who is otherwise prohibited from obtaining firearms. But as the Atlantic Wire‘s Philip Bump documented, that would be kind of a pain, not to mention pretty expensive. Alternatively, given the absence of background checks for private sales and the preponderance of straw purchasing, it’s already pretty easy for felons and other prohibited persons from obtaining ready-made firearms.

Wilson’s Liberator is a breakthrough for a certain kind of techno-anarchist, the kind of person who likes to buy firearms accessories from websites that also hawk copies of Bitcoin Magazine. It is futuristic. But that doesn’t make it the future.