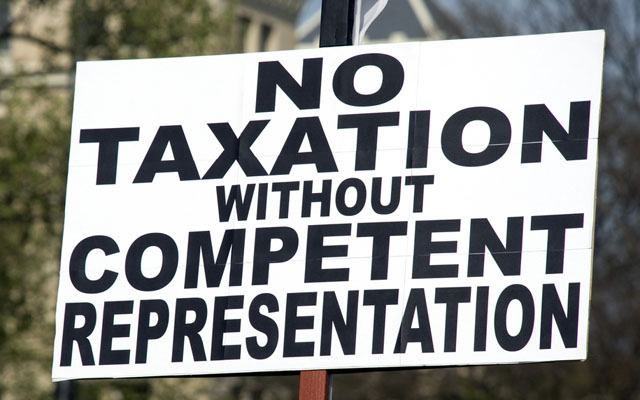 On Tuesday evening, the Treasury Department released a long-awaited investigative report on why IRS staffers gave special scrutiny to the applications of thousands of right-leaning groups seeking tax-exempt nonprofit status. Treasury’s inspector general for tax administration conducted the probe from June 2012 to February 2013 in response to pressure from Congress, and the 54-page report sheds light on the whole debacle.

Here are five key takeaways from the report.

1. Incompetence appears to have caused this scandal, not wrongdoing. This was one of the IG report’s main findings. The IRS, investigators concluded, used “inappropriate criteria” when vetting groups trying to get nonprofit status—namely, groups with “tea party,” “patriots,” or “9/12 Project” in their name; groups focusing on the issues of government spending, debt, or taxes; and, more troublingly, groups that criticized how the government was being run. They put these criteria into a BOLO—”Be On the Look Out”—list.

Why those criteria? Remember, IRS staffers were combing through thousands of applications for groups seeking nonprofit status under the 501(c)(4) section of the law—meaning they couldn’t be primarily political. Those staffers wrongly used “tea party” and “patriots” as catchwords for groups that might be too political. And to make matters worse, those staffers left that bad criteria in place for 18 months.

The IG reports blame IRS brass in Washington, DC, for “insufficient oversight” by allowing lower-level staffers to single out tea partiers and conservatives for as long as they did. But the report did not find evidence that those staffers had it out for conservatives specifically. In fact, the report says that staffers vetting these groups “did not consider the public perception of using politically sensitive criteria when identifying these cases.”

(A caveat: IRS Acting Commissioner Steven Miller reportedly said Wednesday that the IRS’s targeting of tea partiers was mostly the work of two “rogue” employees in the agency’s Cincinnati office. So that’s something to bear in mind.)

2. Even the IRS doesn’t understand how political is too political in the murky world of 501(c)(4) groups. These 501(c)(4) nonprofits, also known as “social-welfare” groups, are not allowed to make politics their “primary activity.” But where that line is drawn is something of a mystery—even to the IRS! One of the bombshell findings in the IG’s report is that the IRS staffers on the front lines, the ones reviewing all those thousands of applications, weren’t sure what they were looking for: “We also believe that Determinations Unit specialists lacked knowledge of what activities are allowed by IRC § 501(c)(3) and IRC § 501(c)(4) tax-exempt organizations.”

For their report, investigators went back and reviewed the nearly 300 applications that IRS staffers had flagged as appearing to be overly political. Of those, 91 of the applications—or 31 percent of them—did not actually show evidence of significant political involvement, according to investigators.

3. All the confusion at the IRS led to a huge backlog and a lot of unnecessary headaches. The IG reviewed nearly 300 applications from groups flagged by the IRS for possibly being too political. But because the IRS couldn’t decide what “too political” actually meant, many of the groups were left hanging for a really long time about their tax status. In some cases, applications were left unresolved for more than three years, spanning two election cycles; the longest wait was 1,138 calendar days.

Long wait times have real consequences. James Warren, who worked for the short-lived Chicago News Cooperative, a nonprofit journalism shop, wrote on Monday of how he and his colleagues heard nothing from the IRS for more than two years after applying for tax-exempt status. “The IRS foot-dragging prompted foundations to look at us skeptically and wonder what the heck was taking us so long to get our IRS tax-exempt status,” he wrote. “One very famous foundation’s grant we expected was delayed precisely because of that ambiguity. Not getting that grant was a reason we closed shop.”

The IRS also asked “unnecessary, burdensome” questions about donors and other sensitive information that, in some cases, the agency never needed or ended up using. The IG blames this on “a lack of managerial review, at all levels, of questions before they were sent to organizations seeking tax-exempt status.”

4. The IRS didn’t feel outside pressure to single out tea partiers. Investigators asked everyone in the IRS with any part in this debacle whether they felt any outside influence to zero in on right-leaning organizations. They said no—all of this came from within.

White House Press Secretary Jay Carney said Tuesday that President Obama and his White House had no role in this mess. The IG’s report backs him up on that.

The report makes clear that the guidelines for 501(c)(4) groups and political activity are ridiculously vague. They’re so vague that the IRS doesn’t understand them. But to their credit, investigators didn’t stop there. They recommended that the IRS develop better guidelines for processing requests involving groups that might focus too heavily on politics. And they suggested the IRS train its staffers before each election cycle on what actually constitutes political activity versus plain vanilla, nonpolitical advocacy.

In a footnote, the IG also says it might launch another audit looking at how the IRS monitors nonprofit groups and makes sure they don’t get too involved in politics.

That, of course, doesn’t fully resolve the issue of the foggy rules on where the line is drawn for making politics a group’s “primary purpose.” That’s a job for Congress.