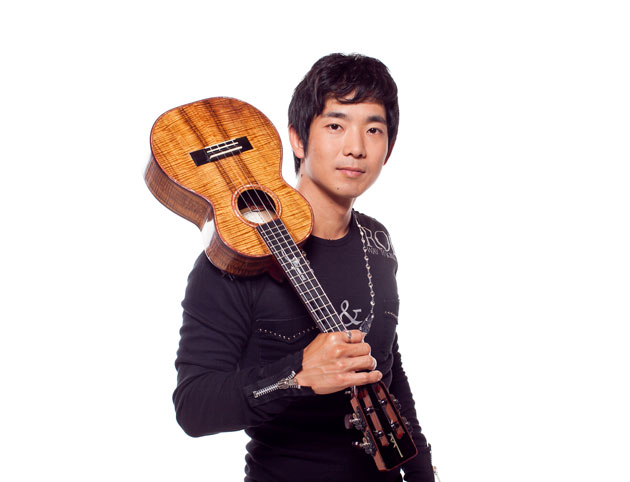 Update (May 8, 2014): PBS will rebroadcasting Life on Four Strings starting on May 9, 2014. Check your local PBS listings for times.

While the jury is out over whether guitar rock is enjoying a renaissance or fading from relevance, the guitar’s little brother, the ukulele, has entered the zeitgeist in a big way. With it’s small body, four strings, and a range of just two octaves, the uke is among the humblest of instruments. But in the past few years, the uke has popped up in the hands of artists from Taylor Swift and Jason Mraz to Paul McCartney and Jack Johnson. In 2011, Eddie Vedder put out an entire album of quavering love songs that sound like the brooding inner monolog of a heartbroken surfer. With Zooey Deschanel as their queen, the cutie-girl set has made the ukulele nearly as ubiquitous as bird tattoos.

Much its recent popularity, though, is owed to Japanese-American virtuoso Jake Shimabukuro who in several ways resembles the instrument he has mastered: charming, unassuming, Hawaiian. But in Shimabukuro’s hands, as he breaks out experimental jazz, lays down a steady blues train, or shreds on rock anthems, this little jumping flea becomes a melodic monster.

Through the late-’90s and early aughts, Shimabukuro carved out a respectable living as a touring artist, but his career exploded in 2006 after a video of him performing While My Guitar Gently Weeps became one of the first YouTube videos to go viral. Forget what the internet says about the overuse of the word “epic.” This performance defines it:

Soon after, late night TV shows began knocking on his doors. He was invited to play duets with the likes of Bette Midler and Jimmy Buffett. And now his existence is the subject of Jake Shimabukuro: Life on Four Strings, a documentary airing May 10 on PBS. Through intimate conversations and inspiring performances, the film offers of portrait of the man and his instrument. I caught up with Shimabukuro recently to talk about his dream collaboration, meeting the Queen of England, and what it’s like to go viral.

MJ: How do you feel when people refer to the ukulele as sort of a gimmicky instrument?

Jake Shimabukuro: Growing up, the ukulele was always a respected instrument. It’s a big part of our culture. It wasn’t until I started traveling outside of Hawaii that I realized people didn’t really consider the ukulele to be a real instrument. But I tell people all the time, I don’t take offense. In fact, I embrace that quality of the instrument. I love that people don’t take it seriously because then people aren’t intimidated by it. They aren’t afraid to pick it up and play it. If you were to say to someone who has never played an instrument before, “Why don’t you learn the piano or the violin or the trumpet,” most of the time they would tell you, “Oh no, I’ll never be able to play that. It’s too hard.” But if you mention the ukulele to someone, they’ll say, “Oh, yeah, that sounds like a lot of fun.” I wish that all instruments were looked upon that way.

“At the time, I didn’t even know what YouTube was.”

MJ: When you played “While My Guitar Gently Weeps” in Central Park that day in 2006, did you have any idea that performance would be life changing?

JS: It was my first time going to Central Park and also my first visit to New York City, so it was definitely a very memorable day for me. But at the time, I didn’t even know what YouTube was. I played “While My Guitar Gently Weeps” for a local television show [Midnight Ukulele Disco] in New York. And it aired and I went back home to Hawaii. And then I guess someone took a clip from the show and put on YouTube, and that’s when it started to circulate. At the time I couldn’t make sense of it because back then no one knew how to email a video to someone. Back then YouTube was cutting edge. It was so new and just so exciting. I’d look at the video and think how was this possible, and then, “It’s me!” Then as the video started picking up momentum, that’s when things started picking up. I started getting contacted by other artists.

MJ: What would you say has been the high point of your career so far?

JS: Well, you know what was the coolest thing, about two years ago I actually got to perform for Queen Elizabeth, and I got to meet her after the show. She said she thought my performance was beautiful and I got to shake her hand and it was just an incredible moment.

MJ: Did you have to bow?

“Most people are awestruck when they see Lady Gaga and Bette Midler, but then the queen comes in.”

JS: The concert is called the the Royal Variety Performance. It’s always attended by the royal family. After the performance all of the artists get to line up backstage to meet the queen. So there we were we were all lined up backstage and on my left was Bette Midler and to my right was Lady Gaga. And the producer came backstage to go over some of the rules: The first thing, you are not allowed to reach for her hand. You have to wait until she extends hers and then you can shake her hand. The second thing, you are not allowed to speak first; you have to let her speak first. And the third thing was it’s not necessary to bow or to curtsey because it’s just a very casual meeting. And I thought, oh good, one thing less to worry about. So I think it’s the Japanese in me, because as soon as she entered the room I was the only one bowing in this line of artists—just bowing frantically without thinking. It was just such a funny moment.

MJ: That sounds so surreal, Lady Gaga, Bette Midler and the queen. Was everyone nervous?

JS: Everyone was nervous, you could tell. As soon she entered the room you could hear a pin drop. And I’m talking about a room with all these celebrities: Not just Bette Midler and Lady Gaga, but Whoopi Goldberg was there, Michael Bublé was there, Miley Cyrus. It was pretty amazing just to be in a room with these people and then the queen walks in. Most people are awestruck when they see Lady Gaga and Bette Midler, but then the queen comes in and then you see these people just awestruck. That was pretty amazing, a very humbling experience.

MJ: When I think about the ukulele’s resurgence in recent years, it makes me think of the Zooey Deschanel character—hipster girls in old-fashioned dresses. Any thoughts on that scene?

“If I could do something with Paul McCartney it would be just amazing. Or Eric Clapton.”

JS: Oh yeah, I love that scene. The ukulele totally fits that whole hipster community or whatever you want to call it, but then at the same time it works great in nursing homes where senior citizens get together and play, and then as the traditional Hawaiian instrument with people doing the Hula and strumming the ukulele and singing. But then it works with Tiny Tim and now with people like Eddie Vedder and the band Train and Paul McCartney, Taylor Swift, Jack Johnson, Jason Mraz. Now it’s really a part of pop culture, and it’s just becoming so universal—not just in Hawaii, but on the mainland, and Asia and Europe. It’s beautiful.

JS: I’ve always been a huge Beatles fan. If I could do something with Paul McCartney it would be just amazing. Or Eric Clapton. Because for me what started all this was George Harrison’s While My Guitar Gently Weeps. He loved the ukulele. On The White Album, Clapton played the guitar solo on the track, so I always thought the coolest would be a duet a with Eric Clapton. I would stand back and he could just wail on the guitar solo. That would be epic.

Jake Shimabukuro: Life On Four Strings premieres on PBS stations nationwide on May 10 at 9 p.m.