The new season of the critically acclaimed cult comedy Arrested Development finally happened (on Netflix in lieu of Fox). And for those who have already made it to the end of the fourth season’s 15 episodes, you heard this new, and most likely unfamiliar, pop song play over the final episode’s end credits:

The song, released as a single last week, is “Boomerang” by Lucy Schwartz, a 23-year-old Los-Angeles-based pianist and singer/songwriter. The tune will appear on her next album, Timekeeper, which comes out August 6.

Schwartz grew up in what she describes as a “very musical” household, beginning her musical education on a family piano. As she honed her vocal and songwriting chops over the years, she drew from a pool of artistic influences that included the Beatles, Elbow, and Coldplay. When she was 17, she was introduced to the popular Santa Monica -based public radio DJ Chris Douridas; shortly after hearing her demos, he became her manager and still is today.

Her peripheral involvement with Arrested Development dates back to the show’s third season in 2005. Her father, David, is a composer for the series (he also worked on HBO’s Deadwood and this 2008 Hunter S. Thompson documentary). One night over seven years ago, Schwartz was finishing up her homework when her dad poked his head in her room. He needed a female voice to perform—in a British accent— the lyrics to a James Bond -style parody that Arrested Development creator Mitchell Hurwitz had requested for the next day. That quick family recording session became the fan-adored “Mr. F,” snippets of which were played in episodes that star Charlize Theron as Michael Bluth’s mysterious love interest Rita Leeds. (Schwartz subsequently sang on the similarly themed Arrested Development original song “For British Eyes Only.”)

“I’m such a big fan of the show, so it was great to be involved,” Schwartz tells Mother Jones.

Mitchell Hurwitz fell in love with the song so much that he had the finale re-edited two days before his Netflix deadline, just so he could make the song fit.

In the near-decade-long interim between season three and season four, she stayed in contact with Hurwitz, who was a good family friend. In those seven years, she had her music, lyrics, and piano work featured in a Shrek movie, a Twilight movie, and the 2008 Mick Jagger -produced comedy The Women. (She also found time to enroll in Occidental College, but dropped out after one semester in order to pursue a music career full-time.)

And around the time the Arrested Development crew was putting the finishing touches on the new season, Schwartz passed along a couple songs to Hurwitz, who was already a fan of her work. When he listened to “Boomerang” (a peppy song she co-wrote with Matt Hales), he fell in love with it so much that he scrambled to have the finale re-edited two days before his Netflix deadline, just so he could make the song fit properly. (“He got it in just in the nick of time,” Schwartz says with a chuckle.)

“This is perfect!” Hurwitz told Schwartz, noting the song’s playful tone and sassiness. “Exactly the way I want to end it!” Hurwitz is equally excited about her new record, as he’s been hyping it up to friends, colleagues, and reporters. “Lucy’s latest album is her Sgt. Pepper[‘s],” he told Entertainment Weekly.

“‘Boomerang’ doesn’t really fit into my genre, though,” Schwartz says. “If you listen to my new [album], it’s very eclectic; there’s a banjo song, another one with soul singers. I would say my music falls into ‘alternative,’ but I don’t really consider my work as part of any one particular genre.”

Schwartz’s involvement with season four of Arrested Development actually goes beyond the one song. In an episode near the end of this season, George Michael (played by Michael Cera) is jamming with a college rock band. Schwartz plays the bespectacled piano player. “Michael Cera was really nice; I had a fun time shooting there,” she says. Funny enough, the scene was shot at Occidental’s campus in LA, the place Schwartz ditched just a few years ago. “I was going home basically every weekend to record, anyway,” she recalls.

So, what’s next for Lucy Schwartz? As of the start of summer, she is writing a screenplay for what she calls a “love story movie musical.” 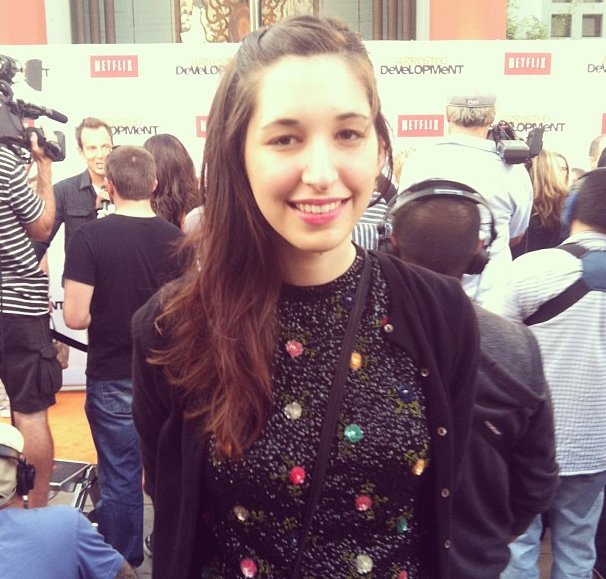 Lucy Schwartz at the premiere of Arrested Development‘s fourth season. That’s Will Arnett (who plays George Oscar “GOB” Bluth II) in the background, to the left. lucyschwartzmusic/Instagram