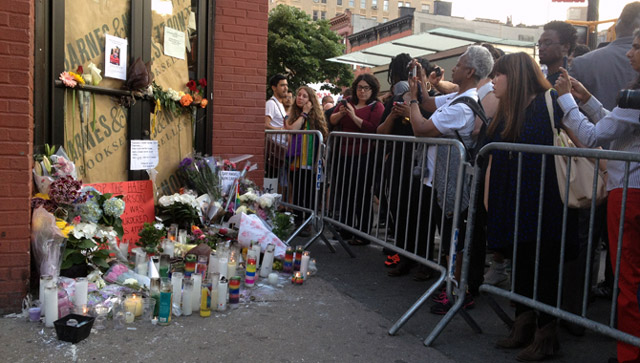 The site where Mark Carson was shot on West 8th Street, New York. Police say the killing was a hate crime. James West

Blinding afternoon sun lit the biggest gay rights demonstration in years in New York’s West Village Monday. The LGBT community and its supporters, including a couple of mayoral candidates, marched in the wake of a murder that has capped a month-long spate of homophobic violence.

Demonstrators—police say 1,500, organizers say many hundreds more—marched through the leafy streets that gave birth to the gay rights movement to the  corner where Mark Carson, 32, was shot in the face and killed Friday night as he walked with a friend. Police have charged Elliot Morales, 33, with second-degree murder and a hate crime, accusing him of hurling homophobic slurs at Carson.

Flourine Bompars, Carson’s aunt, addressed the crowd, calling Carson “a loving and caring person” who will not be forgotten.

The audience applauded and cheered loudly after Bishop Zachary Jones of Unity Fellowship Church of Christ, East New York, shouted, “There is room for everyone at the table of love… and we will march and we will come closer together to make sure everyone has the right to be who they are.” 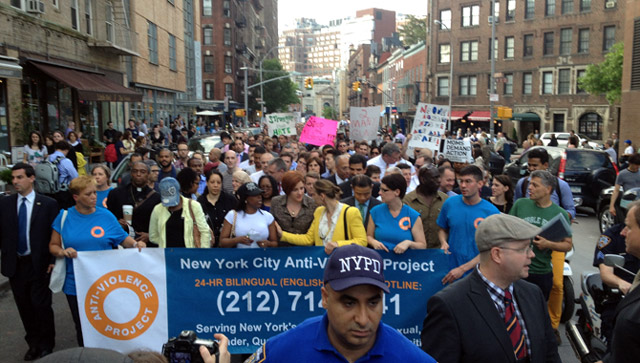 Protestors march through New York’s west village. Police and community groups say there has been an upwing in “bias” crimes. James West

The randomness of Carson’s death has sent a  jolt through the gay community. “It’s clear that the victim here was killed only because and just because he was thought to be gay,” the police commissioner, Ray Kelly, said on Sunday.

Community leaders say Carson’s death is part of a worrying citywide trend: an uptick in violence against gay people, with five incidents this month alone. Police say “bias crimes” have risen this year compared to the same period last year, from 13 to 22, and advocates say that was on top of rising reports of violence from the previous year.

“The most pain is emotional,” said Nick Porto, a 27-year-old fashion designer from Brooklyn, who was assaulted this month with his boyfriend Kevin Atkins, 22, as they walked near Madison Square after a Knicks game. (Police have released a video of the suspects).

“Mark is not going to die in vain. We are not going to get beat up in vain,” Porto said after the rally. “Gay rights, we’re still fighting for them, and the fight is not over. We need to protect each other.” 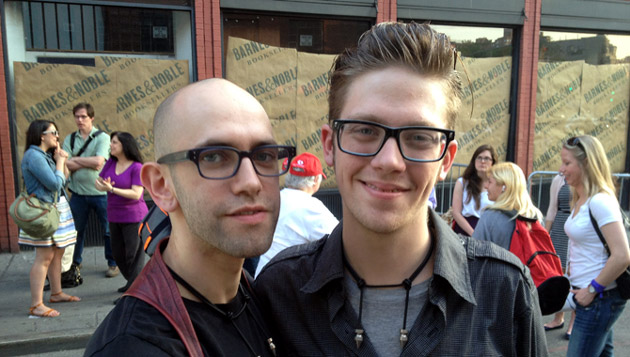 Nick Porto (L) and Kevin Atkins, a couple, were assaulted after a Knicks game on May 5th. James West

But the source of the increase in violence is hard to pin down, say community leaders. Some who spoke at the rally blamed the increased visibility of gay rights: With a greater presence comes greater pushback, the reasoning goes. Sharon Stapel, executive director of the New York Anti-Violence Project, says victims are also feeling more comfortable reporting such crimes.

“But I also think we’re still living in a country where it’s lawful to discriminate against LGBT people, and that sends a message that it’s OK to be hateful towards LGBT people,” she said.

The protest also formed the backdrop to the race for New York City mayor. City Council Speaker Christine Quinn, herself a lesbian, marched alongside relatives of Mark Carson at the head of the rally, but did not speak to the crowd. John Liu, the hyperactive city comptroller who is also a candidate, was at the rally shaking hands and introducing himself.

Nick Porto, the assault victim, admitted he was moved when he looked out across the crowd that filled 8th Street, “My knees got weak, I almost fell, I was just a mess,” he said. “It’s proof, it’s absolute hope in our community, that we will survive this.”

“Gay rights isn’t just about gay marriage,” he told the cheering crowd. “We need to live long enough to share in that opportunity.” 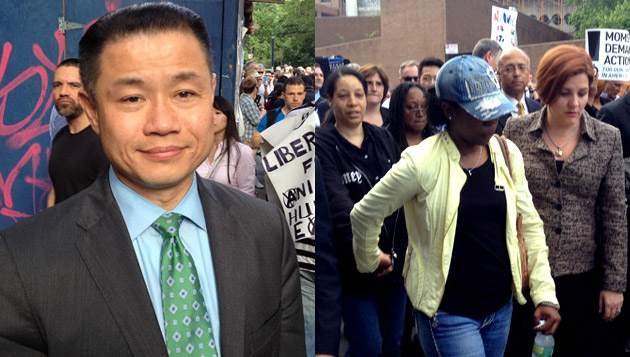 John Liu (L), and Christine Quinn with members of the Carson family. Both are running for New York City mayor. James West