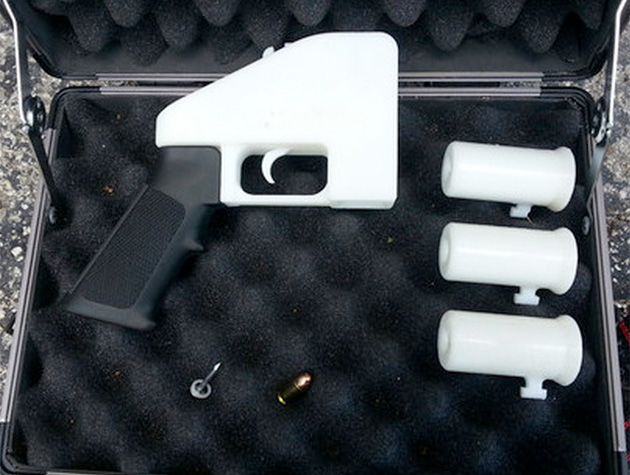 Defense Distributed, the Texas-based company specializing in 3-D-printed plastic firearms, took down its downloadable files on Thursday at the request of the State Department’s Directorate of Defense Trade Control Compliance. The company posted a blueprint for the first fully-operational printed plastic handgun, “The Liberator,” on Monday at its site, DEFCAD; the file was downloaded more than a 100,000 times in its first three days.

In a letter to the company’s founder, Cody Wilson, the State Department alleged that the Defense Distributed’s file-sharing service violated the terms of the Arms Export Control Act, and demanded that it take down 10 of its files, including the Liberator, within three weeks.

“Our theory’s a good one, but I just didn’t ask them and I didn’t tell them what we were gonna do,” Wilson, a University of Texas law student, told Mother Jones. “So I think it’s gonna end up being alright, but for now they’re asserting information control over the technical data, because the Arms Information Control Act governs not just actual arms, but technical data, pictures, anything related to arms.”

The State Department contends that the sharing of firearm manufacturing information to IP addresses in different countries—the company’s servers are based in New Zealand—constitutes an “export” under the terms of the law. Wilson deleted the relevant files from DEFCAD and sent out a tweet announcing the decision. He says he hasn’t spoken with a lawyer yet, but is optimistic things will turn out in his favor—with some reservations.

“I don’t think this goes well,” Wilson said, but “there’s a historical example that it will go well.” He cites the case of Phil Zimmermann, a computer programmer who was targeted by the DTCC after developing a new online encryption system in the early 1990s. The State Department, somewhat bizarrely, classified large-scale encryption systems as “munitions,” which meant that Zimmerman was charged with violation the Arms Export Control Act. “Well, he refused and the United States dropped the prosecution and everything, but it’s a little too close to comfort for me that they would be now asserting this control,” Wilson says.

As with everything else on the Internet, the takedown notice from the DTCC has its limitations. For one thing, there are already a number of “mirror” sites that essentially replicate DEFCAD but are not controlled by Wilson—or anyone in the United States, for that matter. You can also download the plans for the Liberator or various component parts from the Pirate Bay, the notorious Swedish file-sharing index site. But the timing is notable; on Sunday, Sen. Chuck Schumer (D-N.Y.) held a press conference calling for legislation to curtail the development of 3-D-printed weapons by criminalizing their possession (Wilson, as a licensed manufacturer, would have been exempted).

The State Department did not immediately respond to a request for comment.

“The practical, reasonable person should assume it’s going to be a long time before it’s back online,” Wilson told Mother Jones.

“I don’t like it—but I do think that it actually ends up helping the message of the project a little more, that, look, in the end we’re going to be having a fight about what it means to be controlling information.”

Update: I reached out to Rep. Steve Israel (D-N.Y.), who introduced legislation in April to make unlicensed possession of 3-D-printed firearms a crime. His response: “We still need to pass my legislation, the Undetectable Firearms Modernization Act, to give local law enforcement officials the tools they need to prosecute people who would make plastic firearms using the files that have already been downloaded 100,000.” Schumer’s statement strikes the same note: “The plans may be down, but with the blueprints downloaded over 100,000 times, the damage has already been done.  We need to outlaw the manufacturing of these all plastic, undetectable guns before a serious incident occurs.” Neither Schumer nor Israel contacted the State Department prior to the action.

A State Department spokesman confirmed the veracity of the letter to Wilson, but would “not comment on whether we have individual ongoing compliance matters.”